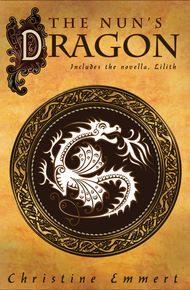 A playwright and poet as well as a writer of fiction, Christine Emmert writes with a fascination for mythology, folklore, and the lives of women past and present. As an actress, she performs in New England. She is the author of Lilith, Titania's Mountain, Ismene, and The Nun's Dragon. Her next novel will be The Tiny Monk, inspired by a recent trip to Thailand.

Christine Emmert lives in the Pennsylvania area where she shares home and hearth with her husband Richard.

The Nun's Dragon by Christine Emmert

A love between a dragon and a nun?

It's certainly one unwelcomed by the Church. And when Sister Agnes Dei is found dead, crushed beneath the convent's water wheel, those who knew her are left with troubling questions. Why did Agnes Dei die? Why does a great wyvern grieve at her grave site? What is holy and what is not?

This Christmas, the nun's dragon will return to the convent, and the secrets that stir at his coming will shake everything this convent believes.

When I was shaking the Christmas trees for titles to include in the holiday fantasy bundle, one of my writer friends, Stant Litore, brought The Nun's Dragon to my attention. Christine Emmert was a new name to me, but Stant was right—this book is absolutely appropriate, and he promised to use his usual verve to help promote it. – Kevin J. Anderson

Sister Catherine came to him in the night. Her head was uncovered, revealing the darkness of her shorn hair. Even as she lay down beside him, he thought he was dreaming. The horse moved uneasily to make room for another body.

"I could not sleep," she whispered. "Too many disturbing feelings from today. Are we really safe from the plague?" She moved closer until the length of her body touched the length of his own.

He opened his eyes and looked at her. As he came to wakefulness, he saw her face emerging out of the shadows. She was beautiful. "We are never safe. I realize we are always walking through the Valley of Death, as the Psalm says. Or flying over it." He stumbled over the words.

She put her hand to his lips. "I wanted to believe it had a purpose—the death of Sister Agnes Dei. Even of the Reverend Mother. I have tried to understand goodness, but it is always snatched away. Can you explain on this night of holiness how a small dragon is the new life we are meant to celebrate?"

"All life is a beginning…" He tried to explain, but was baffled by his own words. "The Reverend Mother tried to understand that. She saved a creature who will one day grow into a great beast. She saved him because her goodness could not be snatched away."

"Not Christian love, but yes, I believe it was love. Christian love would have slain it, as we see in many legends on church walls."

"Is there a greater love than Christian love?" Her voice was soft with wonder.

He moved on his side to look into her eyes, swimming in the glint of moonlight. It was as though he had not seen her before this moment.

"I hope so, sister, or we are all lost." He touched her smooth cheek.

"Even those who feel so certain?"

Her body burned against him.

She hesitated, her eyes very large in the dark. He held his breath and regarded her with some alarm; at her nearness, his body was coming alive in ways he thought he had long suppressed.

"I am not here to seduce you, Brother Edmund," she whispered. "Many times I have thought of such a seduction. But tonight…tonight I need to be with you as a fellow soldier fighting doubt."

He swallowed and met her gaze.

"I have no one to talk with about my fears except you," she said. "We have been among the wounded and the dead. You understand why I ask these questions. Do you not ask them too? Especially on this night, when we are expected to accept changes in our world that come from new and frightening sources."

It was her loneliness that was burning against his flesh. They were all of them lonely. Unable to speak honestly of doubt and fear. This life of denial led to denial even of the most basic common bond between one human and another. Or between a human and a dragon? He wanted to take Sister Catherine in his arms, press her to him; yet he held still.

She was quiet. She lay there just watching him as he watched her. Then she kissed him—as she once had before—and rose slowly to return to her bed.

In a moment she had departed and he was gazing into the dark.

He wished he had provided her with an answer to her question as to whether those who are certain of faith might be as doomed as those who were unbelievers. He did not know that answer, or any other answer, as he lay there in the moonlight with the regular breathing of the horse in his ears.