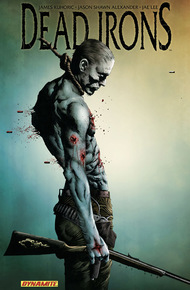 Three bounty hunter siblings blaze a path of death and destruction across the old west. Traveling by moonlight they rip criminals screaming for mercy from their hiding places, but none is ever given. Each bounty is torn, broken, and bled dry before they are delivered dead and payment collected in gold - no silver. The Irons are the most feared bounty hunting killers in the west, but that fear isn't based on them being the fastest with a pistol or rifle. it's because they're the Walking Dead. A lone tortured soul tracks them with vengeance and salvation driving him to end the curse upon his family. Those who he rescues call him savior but those who look upon his twisted and scarred face call him monster. Silas Irons is the only hope his brothers and sister have of salvation from the abominations they've become. But even the purity of his heart can't stop the unnatural rage and bloodlust building in his diseased soul.