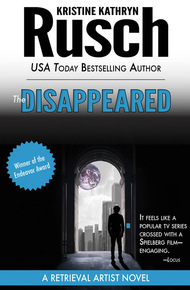 The Disappeared by Kristine Kathryn Rusch

The Disappeared is Flint’s very first adventure, the story that turns him from a police detective in the Armstrong Dome on the Moon into a Retrieval Artist. In a universe where humans and aliens have formed a loose government called the Earth Alliance, treaties guarantee that humans are subject to alien laws when on alien soil. But alien laws often make no sense, and the punishments vary from loss of life to loss of a first-born child. Now three cases have collided: a stolen spaceyacht filled with dead bodies, two kidnapped human children, and a human woman on the run, trying to Disappear to avoid alien prosecution. Flint must enforce the law—giving the children to aliens, solving the murders, and arresting the woman for trying to save her own life. But how is a man supposed to enforce laws that are unjust? How can he sacrifice innocents to a system he’s not sure he believes in? How can Miles Flint do the right thing in a universe where the right thing is very, very wrong?

The holovid played at one-tenth normal size in the corner of the space yacht. The actors paced, the sixteenth-century palace looking out of place against the green-and-blue plush chairs beside it. Much as Sara loved this scene—Hamlet’s speech to the players—she couldn’t concentrate on it. She regretted ordering up Shakespeare. It felt like part of the life she was leaving behind.

Sara wondered if the other two felt as unsettled as she did. But she didn’t ask. She didn’t really want the answers. The others were in this because of her, and they rarely complained about it. Of course, they didn’t have a lot of choice.

She glanced at them. Ruth had flattened her seat into a cot. She was asleep on her back, hands folded on her stomach like a corpse, her curly black hair covering the pillow like a shroud.

Isaac stared at the holovid, but Sara could tell he wasn’t really watching it. He bent at his midsection, elbows resting on his thighs, his care-lined features impassive. He’d been like this since they left New Orleans, focused, concentrated, frozen.

Sara stopped the holovid. Space yachts didn’t bounce. There was nothing for them to bounce on.

“What the hell was that?” she asked.

She got up and pulled up the shade on the nearest portal. Earth mocked her, blue and green viewed through a haze of white. As she stared at her former home, a small oval-shaped ship floated past, so close it nearly brushed against the yacht. Through a tiny portal on the ship’s side, she caught a glimpse of a human face. A white circle was stamped beneath the portal. She had seen that symbol before: it was etched lightly on the wall inside the luxurious bathroom off the main cabin.

Her breath caught in her throat. She hit the intercom near the window. “Hey,” she said to the cockpit. “What’s going on?”

No one answered her. When she took her finger off the intercom, she didn’t even hear static.

She shoved Isaac’s shoulder. He glared at her.

“I think we’re in trouble,” she said.

She got up and walked through the narrow corridor toward the pilot’s quarters and cockpit. The door separating the main area from the crew quarters was large and thick, with a sign that flashed No Entry without Authorization.

This time, she hit the emergency button, which should have brought one of the crew into the back. But the intercom didn’t come on and no one moved.

She tried the door, but it was sealed on the other side.

The yacht rocked and dipped. Sara slid toward the wall, slammed into it, and sank to the floor. Seatbelt lights went on all over the cabin.

Ruth had fallen as well. She sat on the floor, rubbing her eyes. Isaac was the only one who stayed in his seat.

The yacht had stabilized.

She grabbed one of the metal rungs, placed there for zero-g flight, and tried the door again. It didn’t open.

“Isaac,” she said, “can you override this thing?”

She made a rude noise. “As if it matters.”

“It matters. They said it mattered from the moment we left Earth—”

The yacht shook, and Sara smelled something sharp, almost like smoke, but more peppery.

He grabbed the rungs and walked toward her, his feet slipping on the tilted floor. Ruth pulled herself into her chair, her face pale, eyes huge. Sara had only seen her look like that once before—when they’d seen Ilanas’s body in the newsvids, sprawled across the floor of their rented apartment in the French Quarter.

Isaac had reached Sara’s side. He was tinkering with the control panel beside the door. “Cheap-ass stuff,” he said. “You’d think on a luxury cruiser, they’d have up-to-date security.”

The door clicked and Isaac pushed it open.

Sweat ran down Sara’s back, even though the yacht hadn’t changed temperature. The smell had grown worse, and there was a pounding coming from the emergency exit just inside the door.

“Hello?” Sara called. Her voice didn’t echo, but she could feel the emptiness around her. There was no one in the galley, and the security guard who was supposed to be sitting near the cockpit wasn’t there.

Isaac stayed by the emergency exit. He was studying that control panel. Ruth had crawled across her cot, and was staring out the panel on her side of the ship. Her hands were shaking.

Sara turned her back on them. She went inside the cockpit—and froze.

It was empty. Red lights blinked on the control panels. The ship was on autopilot, and both of its escape pods had been launched. A red line had formed on a diagram of the ship, the line covering the emergency exit where the noise had come from. More red illuminated the back of the ship.

She punched vocal controls. They had been shut off—which explained why silence had greeted her when she tried the intercom, when she hit the emergency switch, even when she had touched the sealed door.

Sara sat in the pilot’s chair. It had been years since she’d tried to fly a ship and she’d never operated anything this sophisticated. She had to focus.

First she had to bring the controls back online. Most of them had been shut off from the inside. She didn’t want to think about what that meant. Not now.

She needed visuals. She opened the ports around her, and then wished she hadn’t.

A large white ship hovered just outside her view, its pitted hull and cone-shaped configuration sending a chill through her heart.

The Disty had found her—and they were about to break in.