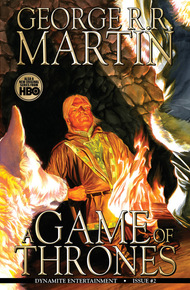 George R.R. Martin has been called "the American Tolkien" by Time Magazine, and now his landmark fantasy series is being adapted to a graphic format, starting with the first book of the series: A Game of Thrones. The premiere issue introduces readers to George's world, adapting the prologue and first three chapters of the novel, and bringing onto the graphic stage such iconic characters as Eddard and Catelyn Stark, Jon Snow, young Bran Stark, and Daenerys Targaryen. One of the greatest epic fantasies of all time rises to dazzling heights in the third issue of this masterly graphic novel adaptation of George R. R. Martin's A Game of Thrones. King Robert has come to Winterfell, accompanied by his Lannister queen, Cersei; her son, Prince Joffrey; and her brothers, Jamie and the dwarf Tyrion, called the Imp. In their train come intrigue, treachery, and attempted murder that will shake House Stark to its very foundations. Meanwhile, across the Narrow Sea, the marriage between Daenerys Targaryen and the Dothraki horselord Khal Drogo wins her brother Viserys a dangerous new ally in his quest to reclaim the Iron Throne.