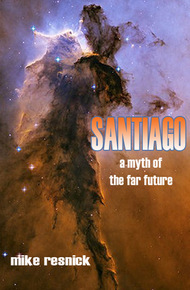 “They call him Santiago.”

So opens this international bestseller by 5-time Hugo winner Mike Resnick, which has been continuously in print since its initial publication in 1986. It is about myth and legend and all those things that can fire the imagination, now or 4,000 years from now, as the very best bounty hunters in thegalaxy close in on the elusive King of the Outlaws, and suddenly unexpected circumstances force equally unexpected decisions from them.

They say his father was a comet and his mother a cosmic wind, that he juggles planets as if they were feathers and wrestles with black holes just to work up an appetite. They say he never sleeps, and that his eyes burn brighter than a nova, and that his shout can level mountains.

They call him Santiago.

Far out on the Galactic Rim, at the very edge of the Outer Frontier, there is a world called Silverblue. It is a water world, with just a handful of islands dotting the placid ocean that covers its surface. If you stand on the very largest island and look into the night sky, you can see almost all of the Milky Way, a huge twinkling river of stars that seems to flow through half the universe.

And if you stand on the western shore of the island during the daytime, with your back to the water, you will see a grass-covered knoll. Atop the knoll are seventeen white crosses, each bearing the name of a good man or woman who thought to colonize this gentle world.

And beneath each name is the same legend, repeated seventeen times:

Toward the core of the galaxy, where the stars press together so closely that night is as bright as day, there is a world called Valkyrie. It is an outpost world, a place of ramshackle Tradertowns filled with dingy bars and hotels and brothels, where the explorers and miners and traders of the Inner Frontier congregate to eat and drink and embellish a few tall tales.

The largest of Valkyrie's Tradertowns, which isn't really very large, also has a postal station that stores subspace messages the way the postal stations of old used to store written mail. Sometimes the messages are held for as long as three or four years, and frequently they are routed even closer to the galactic core, but eventually most of them are picked up.

And in this postal station, there is a wall that is covered by the names and holographs of criminals who are currently thought to be on the Inner Frontier, which tends to make the station very popular with bounty hunters. There are always twenty outlaws displayed, never more, never less, and next to each name is a price. Some of these names remain in place for a week, some for a month, a handful for a year.

Only three names have ever been displayed for more than five years. Two of them are no longer there.

The third is Santiago, and there is no holograph of him.

On the colony world of Saint Joan, there is a native humanoid race known as the Swale. There are no longer any colonists; they have all departed.

Near the equator of Saint Joan, very close to where the colony once lived, there is a blackened swath of land almost ten miles long and half a mile wide, on which nothing will ever grow again. No colonist ever reported it, or if any of them did, the report has long since been misplaced by one of the Democracy's thirty billion bureaucrats—but if you go to Saint Joan and ask the Swale what caused the blackened patch of ground, they will cross themselves (for the colonists were a religious lot, and very evangelical) and tell you that it is the Mark of Santiago.

Even on the agricultural world of Ranchero, where there has never been a crime, not even a petty robbery, his name is not unknown. He is thought to be eleven feet three inches tall, with wild, unruly orange hair and immense black fangs that have dug into his lips and now protrude through them. And when youngsters misbehave, their parents have merely to hint at the number of naughty children Santiago has eaten for breakfast, and order is immediately restored.

Wandering minstrels sing songs about him on Minotaur and Theseus, the twin worlds that circle Sigma Draconis, and always he is portrayed as being exactly 217 years old, taller than a belltower, and broader than a barn, a hard-drinking, womanizing Prince of Thieves, who differs from Robin Hood (another of their favorites) primarily in that he takes from rich and poor alike and gives only to himself. His adventures are legion, ranging from his epic hand-to-hand struggle with a chlorine-breathing Gorgon to the morning he went down to hell and spat full in Satan's burning eye, and rarely is there a day that does not witness the addition of a few new stanzas to the ever-evolving "Ballad of Santiago."

And on Deluros VIII, the huge capital world of the race of Man, the nerve center of the Democracy, there are eleven governmental departments and 1,306 men and women charged with the task of finding and terminating Santiago. They doubt that Santiago is his given name, they suspect that some of the crimes attributed to him were committed by others, they are almost certain that somewhere in their files they possess his photograph or holograph but have not yet matched it with its proper identity—and that is the sum total of their knowledge of him.

Five hundred reports come to them daily, two thousand leads are followed up each year, munificent rewards have been posted on half a million worlds, agents are sent out armed with money and everything that money can buy, and still those eleven departments exist. They have outlived the last three administrations; they will continue to survive until their function has been fulfilled.

But an even more interesting world in the strange tapestry of Santiago's life is the outpost world of Keepsake, at the heart of the Inner Frontier; for Keepsake is the home, at least temporarily, of Sebastian Nightingale Cain, who dislikes his middle name, his profession, and his life—not necessarily in that order. He has fought what he believes to have been the good fight many times over, and he has never won. Not much excites his imagination anymore, and even less surprises him. He has no friends and few associates, nor does he seek any.

Sebastian Nightingale Cain is by almost every criterion a nondescript and unremarkable man, and yet our story must begin with him, for he is destined to play a major role in the saga of the man known only as Santiago....