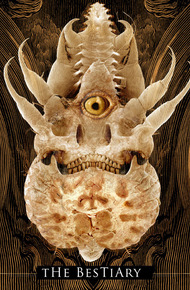 Ann VanderMeer currently serves as an acquiring fiction editor for Tor.com, Cheeky Frawg Books, and weirdfictionreview.com. She was the editor-in-chief for Weird Tales for five years, during which time she was nominated three times for the Hugo Award, winning one. Along with multiple nominations for the Shirley Jackson Award, she also has won a World Fantasy Award and a British Fantasy Award for co-editing The Weird: A Compendium of Strange and Dark Stories. Other projects have included Best American Fantasy, three Steampunk anthologies, and a humor book, The Kosher Guide to Imaginary Animals. Her latest anthologies include The Time Traveler's Almanac, Sisters of the Revolution, an anthology of feminist speculative fiction and TheBestiary, an anthology of original fiction and art. Upcoming in 2016 is The Big Book of Science Fiction.

The Bestiary edited by Ann VanderMeer

A modern bestiary of made-up fantastical creatures organized from A to Z, along with an ampersand and an invisible letter, featuring some of the best and most respected fantasists from around the world, including Karen Lord, Dexter Palmer, Brian Evenson, China Mieville, Felix Gilman, Catherynne M. Valente, Rikki Ducornet, and Karin Lowachee. With an introduction by Jeff VanderMeer.

The anthology contains all original fiction. Think of it as a crypto-zoological text for the twenty-first century, although some entries go far back into history. Cover illustration by noted Serbian artist, Ivica Stevanovic.

A project that has been five years in the making. I am lucky to know so many wonderful writers that are willing to go along with out-there ideas! For this all-originals project each writer was given a letter of the alphabet and the task of developing a creature beginning with that letter. In addition, they had to write their own bios as if they were mythical creatures, too. So in this anthology you actually get two beasts per writer, ha! Even better, this Storybundle is the only place you can get the e-book version until next year. And the creativity and imagination on display is often jaw-dropping—not to mention the fact that we were able to entice writers from all over the world to contribute. It was interesting to see how some writers drew on the folklore of their childhoods and created new and amazing creatures. – Ann VanderMeer

Bestiaries have a long and vibrant history. The first spontaneous bestiary survives in historical documents from ancient Macedonia. A beehive, through a Fortean expression of the uncanny, was transformed overnight. As observed by the beekeeper, and then those that he summoned, all of his bees now had the heads of unusual monsters "and these heads were so heavy that most plummeted to the ground," there to be marveled at by the onlookers. By dusk, the bestiary no longer existed, having been plundered by perhaps the world's first souvenir seekers.

Tales of the first failed bestiary come to us from Roman-conquered England, where a goatherd claimed to have witnessed a wondrous zoological triumph "from the lands beyond." However, upon closer examination, these wonders turned into a herd of burly goats dressed up or shaved in ingenious ways to make them resemble mythical beasts like the chimera and the phoenix.

From those long-lost days of antiquity, we have few other records — mostly circumstantial evidence, like illustrations of what might be bear-centipedes on the sides of amphoras or what either could be a mistake in a decorative dish design or a spider-snake. Not until Marco Polo's day did bestiaries become resurgent, fueled by the rapacious reports from European explorers as they spread like bacteria across the planet. It is in those days, up until around the 1600s, that reports still come to us in illuminated manuscripts and on faded parchment of oddities like: the monkeywhale, the swordfish rhino, the whorled six-legged braincat, and the double-pouched mandible shark-tapir.

After that, as the world has become more fragmented and the ordinary citizen prone to belief in both everything and yet nothing, it has all been downhill for the bestiary. For better or worse, we exist in an age of crass, boring Big Feet and amorphous Loch Ness monsters–along with the rediscovery of further banalities like the gloomy Coelacanth. What could be more mournfully disappointing than the mythologizing fuss over a big ugly fish we already knew existed?

This does not reflect the joy I knew as a child, pouring over rich and fanciful illustrations of the improbable. This does not convey to me any secret, terrible knowledge that will make me different from, perhaps even superior to, others. Like a thousand beached giant squid sightings, it is merely a reminder of more prosaic qualities of our Earth.

Thankfully, then, the present bestiary, titled in the purest most utilitarian fashion "The Bestiary" begins the necessary work of healing this wound of the insufferable mundane. For contained within — curated by Ann VanderMeer, Supreme High Commander of the Weird — you will find accounts from first-interrogators of the unexplainable and the bizarre. There are no hairy apes here nor maudlin mega-groupers. Instead, you, dear reader, may feast upon a rich variety of modern bee-monsters rather than goat-that-are-goats.

Within these pages lurk ampersand creatures and shadows that may become you. Giant amoeba and capybaras that mimic men await merely the touch of your gaze upon a page to reconstitute and startle you. The noted plant expert and medical explorer Dr. Schaller provides ample evidence of a legendary weird rat while anti-capitalist Dexter Palmer chronicles the rise of odd beasts within corporate America. The lauded ursine archivist Catherynne M. Valente even documents a phenomenon only hinted at before in old text, the curious case of the library bears.

Such treasures in a modern age of lowered expectations and the total domination of media by LOLCats! I envy you this first encounter with the true underpinnings of our world, and the hither-to-unknown creatures that inhabit this sphere with us. Some are but a glint or glimmer in the corner of your eye, and yet contain multitudes.

Read, then — read on, without further interruption from me. And good luck. This book may itself be infected with a legendary micro-fauna, but if so then it is already too late for all of us.