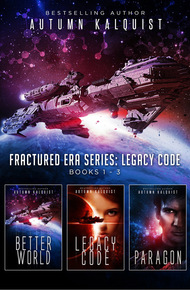 Autumn Kalquist is the bestselling author of the Fractured Era book series and is a singer / songwriter. Her stories have also appeared in several bestselling anthologies, and she's written tie-in fiction for Star Citizen (Cloud Imperium Games).

Each book in the series comes with a song. You can sign up at http://www.AutumnKalquist.com to get a free prequel story and MP3s from the series.

The ships are old, failing, and every colonist must do their duty to ensure the fleet's survival. After decades of traveling, the ships have finally reached their destination: Soren, a toxic planet that may have the resources they desperately need. But mining a planet costs the fleet lives, and tensions begin to rise as secrets, lies, and treason are revealed.

The journey may be deadly, but the most dangerous threat to the colonists may be themselves.

The Legacy Code is the kind of compelling science fiction that fans of the Hunger Games, Divergent, and Battlestar Galactica will adore. – Steven Savile

That's all Maeve wanted, but in the fleet, no one had that. Every day you woke sweating in a too-warm metal box, wondering if this was the day the fleet used you up for good. So after thinking about it long and hard, she'd come up with a solution. There was only one choice—one way to control her fate.

She had to kill herself.

Today was Maeve's eighteenth birthday, and what better day to end her life than on the day she'd come into it? A creak sounded, and Maeve jumped and took another furtive glance down the dark corridor. Here on theLondon's sublevels, lume bars at half-power cast flickering light on dented metal walls and grease-stained floors. She let out a breath. Just the complaint of an ancient ship carrying them on their relentless journey through space. No one was down here—almost everyone should still be sleeping, and the first shift buzzer wouldn't sound for another half hour.

The power core made it so bloody hot, her skin was practically melting. She wiped her forehead and wiggled in her suit as sweat ran down her back. The stolen shift card bit into her palm, and a familiar wave of darkness swept over her, making it hard to breathe. She'd be in deep kak if they caught her here.

Too bad. Can't lash a dead person. She let out a laugh, and with new resolve, swiped the card across the panel. The door slid open in front of her, revealing the maintenance airlock beyond.

Her mirth faded as she entered. Red, blue, and green buttons lit up the control panel, and through the clear glasstex viewing pane, she could see the porthole in the airlock. Out there, a distant red planet spun in orbit, growing larger by the second. Soren.

Her heart jumped a little with that old hope, but it wasn't enough to overcome her despair.

There is no hope. Humanity had been searching for a new Earth for 300 years, and Soren was just another stop on the journey to extinction. Her parents had died too young getting here, and how many more lives would be lost once the fleet started mining that planet? Even if it had the metal they needed to build the next jump gate… the odds were against them. The next jump would just send the decaying fleet to another barren section of the galaxy.

This was the end. Humanity would die out, and their empty ships would drift forever through endless night. And who would be left to care?

Not me. Maeve swiped the card across the next rusty scanner and activated the countdown sequence with a delay. Her heart sped up as she set the card down, so there could be no chance of changing her mind once she entered the airlock.

The warning alarm went off, and she hurried through the sliding door. It locked with a clack of finality behind her. Red lights flickered on and began blinking in time with the alarms. In sixty seconds, the airlock would open, and she'd be swept into space. No more darkness. Just a moment of pain, and then the blissful end.