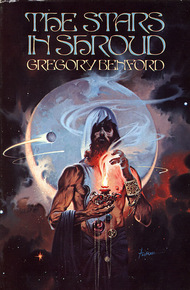 Gregory Benford, author of top-selling novels, including Jupiter Project, Artifact, Against Infinity, Eater, and Timescape, is that unusual creative combination of scientist scholar and talented artist; his stories capture readers - hearts and minds - with imaginative leaps into the future of science and of us.

A University of California faculty member since 1971, Benford has conducted research in plasma turbulence theory and experiment, and in astrophysics. His published scientific articles include well over a hundred papers in fields of physics from condensed matter, particle physics, plasmas and mathematical physics, and several in biological conservation.

Often called hard science fiction, Benford's stories take physics into inspired realms. What would happen if cryonics worked and people, frozen, were awoken 50 years in the future? What might we encounter in other dimensions? How about sending messages across time? And finding aliens in our midst? The questions that physics and scientists ask, Benford's imagination explores.

The Stars in Shroud by Gregory Benford

The alien Quarn struck suddenly at the heart of Earth's interstellar Empire; their weapon a deadly plague, a soul-twisting assault that stripped away the veneer of civilization, and sent its victims fleeing back a million years to the safety of the ancestral caves.

No one knew how the Quarn spread the plague. No one knew why they wanted to destroy humanity.

The Hand upon them.

It was about an hour into morning shift. I was planning out my day. I had to arrange the routing work I could do using the screen, so that it didn’t conflict with the eating routine, the kids’ use of the screen for school hours, and the best times to go for a walk in the tubes.

The kids were pouting, for some reason, and I was having trouble concentrating on the alterations that had been made in the production schemes since yesterday. If you don’t get the changes down pat in the morning you’ll be sending new goods to depot’s that don’t handle that product anymore, and the losses can eat up your day’s management commission before the complaint feedback reaches you.

I’d just about gotten it down when time came for the kids’ first lecture, and I had to give up the screen. I settled down in the dining booth to review my notes but it wasn’t ten minutes before they started whining.

“Dad-Ay, why do we have to watch this old stuff?” Romana said, jerking her chin up with a regal look. “None of the other cubes in this block even carry Schoolchannel anymore.”

“Uh,” said Chark, “and it’s boring. Everybody knows you can’t learn fast without tapping. We’re going to turn out to be rennies.”

“Renegades,” Angela said from the kitchen cloister. “It’s new slang. You should watch the entertainment channel more.” The words were normal but her tone had an edge on it. She’d tried the manual breakfast this morning and it hadn’t worked out, but indocing—or was that outdated term still around?—was one of our flash points. She stood in the doorway and looked at me with her mouth tightened.

“Don’t you think it’s about time you started to listen to what other people think, Ling? Finally?”

“No.” I looked away and started underlining some parts . of my notes. Chark dialed the 3D volume down and the room fell silent. I wasn’t going to get away with a light dismissal.

“If you’d just read some of the articles we gave you,” Chark began in a measured, reasonable tone, “and talked to a counselor at the center, you’d understand why we need tapping now. You were out there yourself, Dad, so…”

“Yes,” I said sharply. “I was out there. And none of you were. You believe anything the Assembly says is good for the common defense, but don’t expect me…”

I stopped. It wasn’t going to do any good. I wouldn’t tell them the guts of what happened out there—that was buried away in a file somewhere with red Secret stickers all over it, and until the stickers came off I couldn’t say anything.

Angela broke her rigid silence, and I could tell that what she was going to say had been held back for a long time. “Why do you tell them such things? They’ll respect you even less if you try to pretend there’s some big mystery about what you did out there. You were just a shuttle captain, a pickup convoy to get the survivors off Regeln after the Quarn hit it. And you didn’t even get many off, either.”