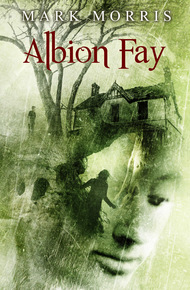 "I know exactly when this photo was taken: July 1975. And I know where it was taken: on the sloping lawn beneath Albion Fay.

The boy in the photograph is me. The girl is my sister, Angie.  This is the morning of the day when we went into the caves for the first time.  It is the day when our lives changed forever."

Albion Fay, a holiday house in the middle of nowhere, surrounded by nature's bounty. For the adults, a time for relaxation and to recharge the batteries, while for the children, a chance for exploration and adventure in the English countryside. A happy time for all: nothing could possibly go wrong. Or could it? What should be a magical time ends in tragedy – but what really happened that summer?

I am determined to hold it together, but as soon as I enter the crematorium chapel the reality of the situation hits me all over again and I feel as if my innards have been scooped out, as if my body has suddenly been transformed from a fleshy, weighty thing to something brittle and hollow. I go cold inside, but conversely I start to sweat. My vision blurs and the walls of the room appear to buckle inwards, like a paper bag in the process of having the air sucked out of it.

Do I make a sound? Totter or stumble? I don't know, but I'm certainly aware of heads turning, of eyes fixing on me. Perhaps they're staring not because I'm making a scene, but because of my current situation. Not all of them can know, of course, but I'm sure some of them have formed their own opinions, doubtless based on half-facts and hearsay. What do they think I've done, some of them? I shudder to think. Or at least, I would shudder if I really cared. Death has a way of making even our most serious concerns seem trivial by comparison.

Expelling a long breath, I blink to clear my vision. Raising my head to focus on the large wooden cross affixed to the wall, and on the pair of high, square windows above it, across which roll bruised and boiling clouds, I move steadily down the aisle between the two blocks of seats packed with black-clad mourners. Some are weeping quietly, their wet sniffs and sharp hitches of breath reverberating off the walls, as if the chapel has been specifically designed to amplify and accentuate grief. Others whisper or murmur to their neighbours as I pass by, and though I hear no words, I'm aware of a rising susurration, like wind in the trees presaging an approaching storm.

Ignoring them all, I take my place on the front row. I don't realise I am sitting next to Chris's mum until she reaches out and grabs my hand. Squeezing it tightly enough to make my bones hurt, she leans towards me, the black lace on her hat rustling like a restless snake.

"Why did this happen, Frank?" she says. "What sort of God…" But then grief overcomes her and her voice chokes off.

"I don't know," I whisper as the sobs she is coughing up make her body jerk and sag. Perhaps she expects more from me, but I can't offer it. Even if my throat hadn't closed off, strangling my voice, I wouldn't know what to say. I am all out of insight, all out of comfort. I feel as though I have dwindled to nothing. In a way I am surprised she is able to see me at all.

The ceremony is a blur. Afterwards I can't recall who has spoken, what has been said. When it's over I remain in my seat as the shuffling rumble behind me announces that people are standing up, moving towards the exit. It is the first cold day of autumn—I saw conkers lying on the path as I walked up from the car park through the trees earlier, and a hook of bitter-sweet nostalgia plucked me instantly back to childhood—yet the interior of the chapel has grown stuffy as the ceremony has progressed, warmed by the beat of life and the outpouring of mostly-stifled emotion. Sitting in the fug of perfume and floor polish, sweat scurrying like insects' feet down my back and belly, I stare at the coffin directly in front of me, no more than a dozen steps away, and it strikes me that its occupant is one person no longer contributing to the heat in the room. In fact, I think, there is not even a person in there anymore. There is simply an absence, an empty receptacle, as cold as the glass against which the dark clouds press, as senseless as the wooden cross on the wall.

The thought horrifies me, especially as I recall how alive she had been. In my mind she is a little girl again, running and laughing, her eyes sparkling, the sun glowing on her skin. She is happy in my memory; she seems immortal. It is inconceivable that all that life has been snuffed out for ever, that her days are done so soon.

I wait until the rumbling and shuffling and low, murmured conversation has dwindled to silence. I remain seated even when I know I'm alone, my body bent forward at the waist, my elbows propped on my knees. I keep my head down and my eyes closed, resting my forehead on the knuckles of my clasped hands, effectively sealing myself off from the world. The mourners will all be outside now, reading the notes on the flowers, gossiping, looking at their watches. How long before they move on, glad to get this over with, put this day behind them?

A song plays softly over the speakers. It must have been playing for a while, repeated on a loop as the congregation filed out of the building, but I have been too preoccupied to register it. Now it worms into my consciousness, and although the song was my own suggestion I shock myself by bursting into tears. Even as my shoulders hitch and the tears trickle over my clenched fists and drip to the floor, there is a small part of me that feels embarrassed, even ashamed, of my outburst. Here I am, having remained stoical throughout the ceremony, suddenly reduced to mush by Whitney Houston's I Will Always Love You. If this was a scene in a movie, it would seem mawkish, schmaltzy. But to me, sitting alone in a deserted chapel, it all at once seems unbearably poignant.

I try to stem the flow of tears, but they keep pouring out of me. I am crying not just because of what has happened, but because I should have seen it coming, should have prevented it. The signs have been there for years, for decades; with hindsight the conclusion, in many ways, is inevitable. I see now that it has been an accumulation of events, each a marker on a journey that started at Albion Fay.

I am so wrapped up in my grief that I don't realise I have company. The first I'm aware of it is when I feel the gentle pressure of a hand on my shoulder. Shock spasms through my body and I jerk upright, my eyes snapping open, my vision instantly blurring with unshed tears. I am suddenly certain that she will be there beside me, that my emotions have been so intense that I have somehow called her back.

But of course that isn't the case. Even through my swimming vision I see that the figure beside me is tall and thin, the pale smudge of its head topped by a cloudy blur of grey hair. I unmesh my hands and knuckle tears from my eyes. The sallow, beaky-nosed face of Reverend Howard comes into focus as he begins to speak.

"I'm so sorry to intrude. I just wondered whether I could be of any help?"

His voice is warm, husky, solicitous. I wonder, perhaps uncharitably, whether he has interrupted my grief as a prelude to ushering me out of the building, so that he can prepare for the next funeral.

"This song. It's stupid I know, but it suddenly just… got to me."

He tilts his head, as though straining to catch a hint of elusive birdsong on the air. "Ah," he says non-commitally.

I blunder on, annoyed with myself for feeling I have to explain. "Yes, it was always Angie's favourite, you see. Angharad, I mean. My sister."