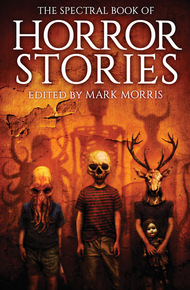 The Spectral Book of Horror Stories edited by Mark Morris

19 BRAND NEW TALES TO CHILL YOUR BLOOD AND HAUNT YOUR DREAMS!

"The figure crouched over his mother was… taking something from her, sliding some spidery thing that struggled and screamed soundlessly out of her side and into is leathery dark bag…"
THE NIGHT DOCTOR by Steve Rasnic Tem

"There wasn't much of a struggle even when Tomas lashed him, limb by limb, to the stakes, although he had plenty to say to Tomas's back as he walked away. It was when Tomas reappeared, leading the shaggy, horned thing from the barn, that Mr. Sunshine really started to squeal…"
CURES FOR A SICKENED WORLD by Brian Hodge

British Fantasy Award winning stories, including a showcase of some of the very best chilling tales for the festive season. – Steven Savile

A rocket whooshed and pop-popped somewhere in the night. Iris Gadney's heart jumped. She hated this time of year. It always crept up on her, and her biology reacted before her brain did. It was funny like that. She should know by now, but she never did. It was always unexpected, the knotting in her stomach that came with the smell of sulphur in the air. What was in fireworks anyway? Gunpowder, she imagined. She didn't really know. She could ask her husband. He taught chemistry after all. He'd know. But she didn't want to. She didn't care. She just wanted November the fifth to come and go and everything to return to normal. That's all she ever wanted—normality.

Des hadn't so much as twitched at the noise. In fact hadn't moved from behind the Daily Express for at least twenty minutes, but she knew better than to try to winkle him out of his shell into conversation. When he came home from work he was like one of those deep sea divers who have to go into a decompression chamber. He was never himself—whatever 'himself' was—until he'd gone through the sports results, always reading the paper backwards, as if world events like the Vietnam War and the famine in Biafra, the latest pronouncement by Prime Minister Ted Heath ('Ted Teeth' as Des called him) or the army firing rubber bullets in Northern Ireland, were of far less importance than men kicking a ball around—which, to him, they probably were.

She went into the tiny scullery at the back of the house, and was halfway through making tea, buttering sliced bread for some corned beef and Branston sandwiches, when she heard the familiar ding-dong (Avon calling!) of the doorbell.

"I don't know, do I?" Iris lowered her voice to a sarcastic murmur as she wiped her hands on a tea towel and strode past the expanse of newspaper. "I expect it's for me. I expect it's Blue Boy from The High Chaparral…"

By the time she got to the front door Kelvin had already opened it and her mood instantly lightened because he was facing another eight-year-old, Gareth Powell (she knew his mum Gloria, only by sight, mind). It hadn't happened much before—a friend coming to call. It hadn't happened ever before.

"Mum!" Her son looked over his shoulder at her with eager eyes under the scissor-line of his fringe. "Gareth wants me to go out to play. He says a whole pile of boys are up the quarry making a bonfire!"

"Well you can forget that for a start," Des said from the sitting room before she could answer. "There's probably a load of yobs from the Sec Mod up there, and I'm damned if I'm running you to hospital because some head case does something bloody daft."

"They're only collecting wood," Kelvin bleated.

"You're telling me they're not going to be messing round with sparklers? And matches? And bangers? 'Course they are—and little nippers like you are the ones that get picked on. When I was in school a lad called Truscott got a jackie jumper put in the hood of his duffel coat. We never saw him again after that."

"Gareth, love. Why don't you come in and play?" Iris offered, ever the peacemaker. "You can go in the middle room."

Kelvin frowned hard. "He wants to go up the quarry!"

"Yes, well, you're not—and that's final," his father called, shirtsleeves rolled up, tie still on. "If he wants to go, he can go on his own."

Kelvin swivelled his head back to his friend, who was already looking sheepish and backing away as if frightened. Perhaps his dad didn't talk to him the way Kelvin's dad talked to Kelvin.

The boy didn't meet Kelvin's eyes and his cheeks reddened as he faded into the shadows beyond the glow of the porch light.

"I—I'll see you in school tomorr-"

The word was broken by a crackling rasp in the sky and splutter of magenta, the explosion above spilling arrows of sodium yellow. Iris' heart sank and he was gone.

"Hey. Children's hour is on." She pressed the door shut. Kelvin was already climbing the stairs, head downcast. "Tea's ready in a minute."

"Don't be ridiculous. You got to eat. Get down here. Now." The slight lift in his dad's voice was more than enough to get Kelvin to do as he was told. "I'm not in the mood for it, all right?"