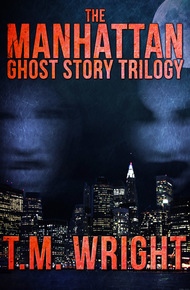 Terrance Michael (T.M.) Wright is best known as a writer of horror fiction, speculative fiction, and poetry. He has written over 25 novels, novellas, and short stories over the last 40 years. His first novel, 1978's Strange Seed, was nominated for a World Fantasy Award, and his 2003 novel Cold House was nominated for a Bram Stoker Award. His novels have been translated into many different languages around the world. His works have been reviewed by Kirkus Reviews, Publishers Weekly, Library Journal, Booklist, and many genre magazines.

His first publication was the non-fiction study of unidentified flying objects, entitled The Intelligent Man's Guide to Flying Saucers (currently available from Crossroad Press) in 1968 for AS Barnes. His seventh novel, A Manhattan Ghost Story, has had fourteen foreign editions and was optioned to be filmed in the 1980s.

Terry passed away in 2015 and is survived by his wife, Roxane.

First Book: In "A Manhattan Ghost Story": A photographer, Abner Cray, goes to NYC to work on a "coffee table photo book" about Manhattan and encounters, in the apartment he's renting, a woman, Phyllis Pellaprat, with whom he falls in love. She has a dark secret, and so - it turns out - does the absent friend whose apartment he's using. As he loses, and searches for the woman he loves, he wanders streets filled with ghosts, memories, and dangers he never imagined.

Second Book: In "The Waiting Room": First-person narrator Sam Feary is one of Abner's lifelong friends and he's convinced that Abner, in his continuing quest for Phyllis Pellaprat—who's all-but left him entirely—will be lost forever in the world of the dead: he goes in search of Abner, embarking on a journey that is as weird as Abner's own.

Third Book: "A Spider on my Tongue": Abner, some twenty-five years older than when we previously heard from him—is living in a small house in the middle of dark woods somewhere in New York State. He's trying to escape the hold that the spirits of the dead (whom he now refers to as "the passing misery") have had on him for decades. He's convinced that Phyllis has still not left the earth entirely, and Sam Feary, as well, who has since died. Abner's first-person narration is very much a plea to be free of the clinging past and, at the same time, to continue to be part of it.

Without this book there would have been no Sixth Sense, no Ghost. Beautiful and heartbreaking by turns with a rich mythology that blurs the lines between the living and the dead. – Steven Savile

When I think of a ghost story, I think about children shivering around a campfire while an aging man with a long, austere face summons up—in resonant, wonderfully spectral tones—the way the misdeeds of the dead will soon be visited upon the living, and I think about old gray houses that have had Evil implanted in them, and I think about crying in empty rooms, about cold spots, warm spots, hot spots, hounds out of hell, men who hang themselves in attics and in cellars, again and again and again.

And it's all true.

I know it's all true.

But there's a whole lot more going on over there, on The Other Side, than any of us can imagine. And some of it's very interesting, very entertaining, but some of it smells bad, some of it stinks, in fact, and if you tried to put your finger on it, if you tried to pin it down and say, Yes, this is what it's all about, this is what Death is all about: sit back now, I'll tell you!—My God, they'd swarm all over you like angry bees, the dead would, like angry bees.

I came to New York, six months ago, on the Amtrak out of Bangor, Maine. I didn't need to take the train; I could easily have afforded to fly, but the hard truth is that I'm scared of flying, and trains are romantic, after all. And I have long been a romantic.

On the way down, I sat next to a woman in her early thirties who was wearing a very abbreviated miniskirt. Miniskirts were just then on the tail end of their comeback, and since this woman had long and well-muscled legs, with a lovely, soft, even color to them, and since her miniskirt had hiked up considerably around her thighs, the trip was very enjoyable.

When I got on in Bangor, the car was three-quarters full and I entertained the idea that I'd get to ride all the way to New York, a twelve-hour journey, with both seats to myself. In Lewiston, Maine, however, five people got on—a handsome older woman in a tweed suit, a teenage girl who giggled a lot, a fortyish man with thinning black hair who wore a gray, pin-striped suit, a fat, middle-age woman who breathed heavily and coughed often, and a young guy with a backpack and trendy moustache.

Guess who decided to sit next to me?

Ever been to Manhattan? I have. I live here, and I want to tell you there's more going on than meets the eye. Lots more.

Because Manhattan is, in reality, two cities—twin cities, sort of—and in one of those cities people move from place to place in search of a number of things (employment, food, a place to sleep, someone to sleep with, a good show, a building to jump out of, shoes to buy), and in the other city people do pretty much the same kinds of things, only they do them for very different reasons.

And if you get stuck in that other city, that other Manhattan, you find yourself getting awfully desperate and mean-spirited, the way some people are affected by too much heat or the crying of small children. And you get scared, too. Scared enough to give up even going to the bathroom, because you're not sure what you might find in there.

My name is Abner W. Cray and I'm thirty-three years old. I'm tall; I have sandy blond hair, and before I came to Manhattan, I was a few pounds overweight. I've been told that my eyes are my most expressive feature, which is a nice thing to have said, but which is true, I think, of most people.

I've been staying in room 432 of the Emerson Hotel, on Sixth Avenue. It's early June as I write, and I have been here for four months.

Room 432 of the Emerson Hotel is small and nasty. It's painted blue and gold; the bottom half is blue, the top half gold. The paint is nearly as old as the hotel, probably. When traffic is heavy on Sixth Avenue, the building vibrates and the paint flecks off here and there, especially on the wall that faces the street, where there's a moisture problem.

The floor bears a large, threadbare, red oriental rug, from Woolworth's, I imagine, circa 1960, and there's a wrought-iron, floor-standing lamp, sans shade, alongside a green, one-drawer writing desk near the door. The bed is wrought-iron, as well—the mattress lumpy and soft. A Gideon Bible rests on a little, dark wood nightstand close by.

I'm a photographer. I've been a photographer since I was old enough to pick up a camera and aim it and press the shutter release, and I came to New York to do a big, coffee-table photo book about Manhattan. But I fell in love, instead. And I got stuck here.

And we need such things when we feel certain we're going to be caught up, suddenly—or already are caught up—in something exquisite and eternal. Like death. Or love. Or both.

And we need such things because they help confirm that we are, ourselves, soulless, gauche and temporary. Sure it's a lie. I know it's a lie. But it's how most of us make it from one day to the next.