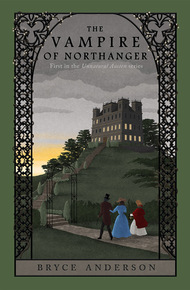 Bryce Anderson wrote his first book at the age of six. It had time-traveling dinosaur robots. Also fighter jets. That was all the plot it had, and as far as six-year-old Bryce was concerned, that was all it needed.

In an alternate dimension, Bryce rules the five lunar colonies with an iron fist. In this one, he resides in Salt Lake City, where he writes, codes, drinks an unhealthy amount of coffee, and tries to live each day as though it was the most recent in a long sequence.

The Vampire of Northanger by Bryce Anderson

Catherine Morland—nobody's idea of a heroine—is a sheltered young lady who is mad for gothic novels, especially ones with vampires. Thirsting for adventure, she leaps at the opportunity to holiday in Bath. But the city is filled with perils, threatening to plunge our hapless heroine into violence or impropriety. Vampires walk the streets at night, preying upon the unwary, and more than one has designs upon Catherine herself.

Cross and stake at the ready, the charming, awkward Miss Morland navigates Bath society even as she takes up the vampire-hunting trade. A wealthy but eccentric family, the Tilneys, take an interest in her, and Catherine finds herself captivated by their quick-witted son, Henry Tilney. As Bath grows more dangerous, the Tilneys extend Catherine an invitation to join them at their estate, the ancient Northanger Abbey. There she will face unexpected dangers and discover hidden strengths. But will Catherine's adventure end in matrimony or in bloodshed?

The Vampire of Northanger is a funny, violent romp through a supernatural England, inspired by Jane Austen's classic novel, Northanger Abbey.

Jane Austen's long-lost vampire novel. I confess I haven't read Austen, but this modern re-imagining of her work—by translocating it into a world where vampires are real—makes me want to give her a try. My only fear is that her entirely vampireless exploits won't live up to the dark and nuanced balletof inter-species manners that Anderson has fashioned from her more pallid offerings. – Jefferson Smith

Catherine at last brought forward a question which had long weighed upon her mind. "What will you make of yourself, James?"

"You go off to Oxford. What shall you be when you return?"

"A student, of course. I shall return for Christmas, if not sooner."

This satisfied Catherine's inquiry not in the least. "But what shall be your occupation? A physician, perhaps? Or a clergyman like Father? I think your voice is too high for you to be a clergyman, but you do know your Bible well, so perhaps your voice doesn't signify. Does one go to Oxford to become a coachman?"

"I do not believe so," James replied. "If I asked for your confidence, would you be able to keep my secret?" What could Catherine do but agree? Her brother's smile was all mischief as he leaned toward her and whispered, "I wish to become a vampire hunter."

Catherine found herself utterly insensible to the admission, though her brother clearly expected it to evoke some declaration of horror. "Father hunts ducks in the fall," she said. "Is it like that, only with vampires?" The look of pity on his face wounded her. "But vampires live in the city, and I suppose they are far more clever than ducks, so it would be nothing like that, would it? Still, it does not seem respectable. Tell me that it's respectable, won't you?"

"Respectable? Why, it's the adventure of a lifetime! The great vampire hunters are welcome in the presence of King George and on the floor of Parliament. A hunter came through the inn last year, and he needed only to show his papers. He didn't pay for a drink or a meal the whole week of his stay. Yes, dear sister, it is a most respectable profession."

"But is it dangerous? Are there many vampires left? How does one hunt a—"

"Hush! You are so full of questions, and I'm not sure I have all the answers yet. But if you like, I have a book that, though fiction, I think captures the spirit of the venture admirably. If you like it, I can suggest a dozen others to stand alongside it."

That night, after every other candle in the house was extinguished, one continued burning into morning, for anyone who has laid hand upon The Blood Soaked Fiends by von Helmut can attest to its powers to drive away any thought of sleep. The next morning, after being roused to accompany James and her parents to meet the public coach, she returned to her room, where she read until she was compelled to sleep, and slept until she was compelled to read. Each page brought new revelation, realizations of what adventure and intrigue awaited a woman fortunate enough to be cursed with a tyrant father and a bed-ridden mother. She saw what charmed a path her life might have taken had she been untimely orphaned, and how the virtues of her soul might be demonstrated only through contact with vice.

Page by page, she awakened to the dullness of her quiet, pastoral life. Page by page, Catherine Morland learned what it meant to be a heroine.