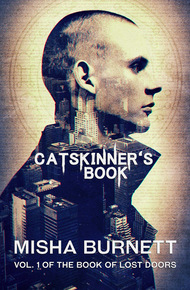 Misha Burnett grew up reading the New Wave Science Fiction of the 1960s and 1970s, and always wanted to be a science fiction writer when he grew up. While waiting to grow up he married and raised three children, supporting his family with a variety of jobs, mostly in the maintenance and security industries. Now, just past his first half-century, he is working towards fulfilling that childhood dream.

Catskinner's Book is the first of a quartet on novels collectively known as The Book Of Lost Doors. Set in a world inspired by William Burroughs' Nova Express novels, they tell the story of James, the child of a cult leader, and Catskinner, the alien intelligence that lives in James' head.

In Catskinner's Book, James is a loner, working as a contract killer. When his boss Victor is killed, James and Catskinner go hunting the killer and along the way find that there are others who, like himself, have been altered by alien technology. Soon they are caught in a war between Outsiders, a war with constantly shifting sides and no rules.

My most gripping reads are almost always the ones where the very premise itself grabs my attention in a choke hold, and such is the case here. Long-time loser James Ozwryck finally has a life: a small apartment, a regular job, and a steady income. There's even plenty of time for video games. It might not be much, but it's his. And to keep it, all he has to do is let a demon borrow his body from time to time. You know, to kill people. It's a pretty sweet deal. – Jefferson Smith

I like watching old TV shows, and now that a lot of television is available on-line I can catch up on all the shows I missed. I watched a couple of episodes of CSI. I love that show, the characters are likable and the mysteries all have answers. Catskinner seems to like it, too. He laughs a lot, usually during the autopsy scenes.

Then I filled my pockets with candy bars and went to work. At eight-thirty that evening I was getting out of a cab a couple of blocks away from the place Victor had told me about.

The restaurant was a little Italian place. It smelled good, and I wondered how their food was. I'd never eaten there, and after work tonight it would probably be a really bad idea to go back. I could feel Catskinner like a hot towel draped over my back. When he's fully alert it's like the tattoo on my back is made out of wire and the current gets turned up all the way.

I went in the front door. There was a big dining area to the left and a small one to the right. The man I was looking for was on the right. I focused my eyes on him and whispered in my head.

target acquired, he whispered back. He really enjoys our night jobs. I just get out of his way and try not to watch when he's working.

I walked past the host at the podium by the door.

"looking for someone," my mouth muttered.

Only one table in the small section was occupied. There were four men sitting there—the bald man who looked older and more out of shape than he had in Victor's picture, and three younger ones. All of them were wearing jackets and my eyes scanned them as Catskinner looked for weapons.

I had no jacket, no obvious place to hide a weapon, and like I say, I don't look like much. That let me get within a few feet of the table before one of the young men started to get up. He was saying something when Catskinner reached down into all those strings running down my spinal cord and yanked.

My body hopped up on the table. I could feel what my body was doing, the muscles pulling in my legs and the smack of my feet on the tabletop, but Catskinner was in total control and I didn't have to do anything except stay out of his way. The men at the table were all busy, ducking, reaching for things, shouting, and Catskinner kicked out, left and right, knocking plates of food and glasses in their faces.

Then he kicked the bald man in the head. His head spun the side and I felt something crack in his neck. Catskinner kicked him again and now his head was pointed up and to the side. One more kick and his head was turned around almost all the way backwards. His body jerked and salad went all over his lap.

The other men were getting up, shaking off the food and plates. Catskinner gave a jump and the table toppled across two of the men's laps. He rolled off the table as it fell and had a knife in my hand, a wooden handled steak knife he'd gotten off the table somehow. My arm snapped out and then the steak knife was sticking out of the face of the man who wasn't under the table. He slid off the booth onto the ground.

One of the other men had a gun out then, still pushing the table off him. Catskinner reached out and grabbed the gun. He twisted and I could hear the man's fingers breaking. He took the gun and threw it at the other man who was still tangled in the tablecloth.

Catskinner dropped to the floor and bounced back up, and there was a bottle of wine in my hand. He slammed it against the table edge so it broke, wine and glass spraying all around, and pushed the half he was holding into the neck of one of the men and there was a lot of blood.

The last man, the one with the broken hand, was just sitting there, holding his hand, his mouth and eyes wide open. Catskinner scooped up a fork and stuck it in the man's mouth, then pushed until something inside the man snapped and the fork went up into his brain.

People in the rest of the restaurant were starting to get up or get under the tables or just standing and getting ready to scream. Catskinner moves a lot faster than people do, so no one really knew what was going on yet.

Let's go, I suggested. The four men were dead, and Victor said don't do anything with the other customers unless we had to. If we left now we wouldn't have to.

but i like this place, he whispered back, laughing. love the atmosphere.

Victor said clean, I reminded him. I could feel the fever in him, the hunger to destroy. I'd be lying if I said that I didn't feel it, too. It felt good, the power, the rush of knowing that the most dangerous thing in the room was under my skin. Catskinner could kill everyone in this building before anyone could stop him, except for me.

Please, I said in my head. Enough. Let's go.

Catskinner turned, slow enough that the other people could see him move. "goodnight, sweet ladies, goodnight" he said out loud with my voice, and then we were out the front door, the glass cracking as he slammed it behind me.

Catskinner ran then. Across the street, down an alley, over a fence, down another alley, so fast that I wasn't sure where we were until he slowed down and stepped out onto a street I knew, a couple of miles from the Italian restaurant. And then—just like that—he let go of me and I was walking on my own again. I wasn't tired or sweaty or even breathing hard. I was hungry, though. Ravenous.

Catskinner gets the energy to move my body the same place I do, from the chemical energy stored in my body fat, and this little job had probably burned a thousand calories. Hence the candy bars.

There was a bus stop on the corner, I walked down there and waited for the bus.

Yeah, I know. A contract killer taking the city bus as a getaway vehicle from the scene of a multiple homicide sounds pretty crazy, right?

In the first place, though, no one was going to expect me to flee on foot, and in the even firster place if they did they'd concentrate their search much too close to the scene—Catskinner can cover ground in a way that no police department in the world is prepared to believe. Cabs keep records, and stolen cars can be traced. The bus is a very anonymous way to leave a murder scene—not that I'm advocating murder, mind you. It's not a business that suits everybody.

Besides, there are any number of well-paid expert witnesses willing to testify that I am crazy. Some of whom still have the scars to prove it.

So I sat on a bench with an ad for a pawn shop and ate chocolate for a while. It was a nice evening for sitting on a bench and watching the traffic go by. I did a little discrete checking for blood on my hands and clothes. Didn't see any. Catskinner is a very neat monster. I didn't see a single emergency vehicle go by. Some sirens, but they were far away. The bus rumbled up and I took it close enough to home to walk the rest of the way.

I could have stopped by Victor's office and reported the success of the job—I don't believe he has actually slept for several years—but I didn't feel like it. He'd assume everything went well unless he read otherwise in the on-line papers in the morning.

I went straight upstairs. I wanted to watch TV, maybe find some cartoons where the violence didn't leave scars and everything turned out okay in the end.

The last kill was staying with me, little details coming up every time I tried to close my eyes. That man looked at me, clutching his ruined hand and knowing that he was facing something he could not understand, knowing that he was going to die. He looked at me, and I wasn't there. There was nothing human in my eyes, only Catskinner's hungry alien intelligence. I saw what he saw, mirrored in his dying eyes, a man-shaped hole in the world.

Maybe he was a mafia enforcer, maybe he was a really bad man. But he had been a man, a human being, and he was dead because something dark and cold and unnatural had used my body as a conduit to reach down onto this Earth and snuff out his life.

Guilt makes me angry. I never asked to be born, never asked to be made into what I am. I'd suggest you take it up with my parents, but they're dead and I devoutly pray that they are suffering more in hell than anything I could ever do to them.

Redemption is costly. Whiskey, on the other hand, is cheap. I took a couple of shots and thought about something else. Bunny rabbits. Puppy dogs. Pretty girls.

Another couple of shots and I was able to sleep.