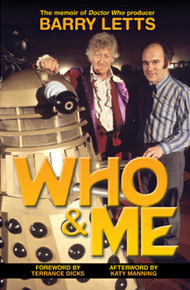 Barry Letts began his screen career as an actor, starring in the Ealing film Scott of the Antarctic and TV dramas such as The Avengers, The Moonstone and Gunpowder Guy in which future Doctor Who actor Patrick Troughton took the lead role. In the 1960s he switched to directing, taking the helm of classic shows such as The Newcomers and Z Cars.

Who & Me by Barry Letts

Barry got his first taste of Doctor Who in 1967 when he directed the six-part serial The Enemy of the World. In 1969, he took over as the show’s producer. This was an exciting time for Doctor Who – the show had a new lead actor, and was being broadcast in colour for the first time. Barry reveals his memories of this era, talking about his relationship with script editor Terrance Dicks and the show’s cast, Jon Pertwee, Katy Manning and Roger Delgado.

Packed with behind-the-scenes gossip, fascinating production detail and witty anecdotes, Who and Me recounts Barry Letts’ journey from struggling actor to successful producer, and the ups and downs of working on Doctor Who during the Jon Pertwee years.

‘I’m so glad you both could come,’ said Russell T Davies to Terrance Dicks and me. ‘Ever since we got together, Phil and I have been meaning to ask you to come and have lunch with us, but events just took over. We want you to know that we think your era was the best of the old Who...’

Over 35 years after we left Doctor Who, Terrance and I had been invited down to Cardiff for the première screening of the regenerated series. Terrance was script editor when I was producer. There was a reception beforehand, packed with press, but also with a lot of well-known faces to be glimpsed through the crowd.

Before we could even manoeuvre ourselves into the scrum around the wine bottles, Russell T Davies pushed his way through to us, with the producer, Phil Collinson.

And he went on to tell us that they were quite consciously trying to take what we had done and express it in modern-day terms. This first episode made it very clear, picking up the first Jon Pertwee story about the Autons. The intention was to give a signal to the fans that this was their own Doctor Who, brought up to date but keeping the spirit of the show at its best. And they’ve succeeded magnificently.

Of course, there’ve been some big changes – the biggest being the personalities at the centre. All the first eight Doctors and most of their companions ‘talked posh’, after all. At first, it was quite a shock to hear Chris Eccleston’s northern accent. But it’s bang-on right. When Who started in 1963, the BBC was middle class to its core, and thought of its target audience as middle class. But Doctor Who is for everybody, and the new producers have recognised the fact.

But quite apart from that, it doesn’t matter how much the Doctor changes his surface personality. On the contrary, one of its strengths has been precisely that each Doctor was very different from his predecessors.

I was very aware of that when I was producer. Jon Pertwee’s dignified dandyish persona had been chosen as a contrast to the clownish ‘space hobo’ that Patrick Troughton had given us. And after I’d cast Tom Baker to take over from Jon, Philip Hinchcliffe, the incoming producer, and I invited him to have lunch with us at the Balzac restaurant (and a very good lunch it was) to meet Bob Holmes, the script editor, and to work out with the three of us his approach to the new characterisation.

The one thing we were all agreed on was that the last thing we wanted was a ‘poor man’s Jon Pertwee’; and what emerged, as a deliberate contrast, was the wild bohemian fourth Doctor, with his floppy hat and long scarf (though we didn’t plan it to be quite so long!).

But the core Doctor is always the same – and remains the same in Chris Eccleston’s and David Tennant’s sparkling characterisations: eager for every new experience, and seizing upon each opportunity to fight against those, whether human or alien, who will use evil means to gain their own self-centred ends.

I never appeared in Doctor Who when I was an actor. But having spent over 20 years living in the same world that Patrick Troughton, Jon Pertwee and, later, Tom Baker came from; I could talk to them in their own language.

The world we came from was a world where every town of any size had a repertory company, with a different play every week; where actors would happily take to the road in year-long tours; where the flickering, often distorted black and white images of television were only beginning to infiltrate the homes and minds of the Great British Public, as we sometimes called the amorphous multi-eyed creature we courted and on whose favour we depended.

So I had shared their hopes and their fears; and I knew that behind the public face of each of them there lived a very different and slightly odd being whose nerve endings were much nearer the surface than most.

When Chummy, my wife, and I were still ‘in the profession’ we had to make a conscious effort to stop referring to those outside it as ‘real people’. Yet that’s how different we felt. So in this book I’ve tried to give you some idea of the Patrick and Jon that I knew what they were really like. Tom I’ll have to leave until next time.

But it isn’t just a book of gossip. I’ve also tried to let you know what it was like to be part of this extraordinary enterprise as it took hold of the public imagination and put down the roots which have allowed it to grow and flourish for over 40 years – and for how much longer? It’s not strictly chronological; but not ‘stream of consciousness’ either; maybe halfway in between. Conversational perhaps.

I’ve chosen the title quite deliberately. This is a book about Doctor Who, certainly, but it’s also a book about me. There’d be no point in writing it otherwise, considering all the excellent books which have already been published giving so much of the background of the show.

(Thank you, David Howe, Mark Stammers, Stephen James Walker, Peter Haining, Jean-Marc Lofficier. Time and again you came to my rescue with precisely the detail I was searching for.)

I’ve been honest with you. If I think I screwed up I say so. But if I’m proud of something, I haven’t hidden behind the false self-deprecation that’s customary.

What else? Well, I’m quite sure that amongst my readers there’ll be those who are already involved in making television, or films – and many who would like to be. So whenever it seemed to fit, I’ve given you some tips on the best way of going about it, the kind of thing I’d have found invaluable myself.