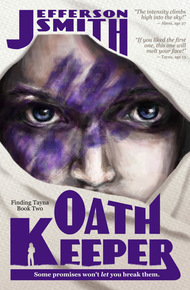 In a world that has known only peace, a Warrior-King has arisen. His Gnome army swarms unhindered through the Forest. Refugees scatter. And the Three Avatars of the Dragon have chosen sides in their contest to restore the peace … or to shatter it for all time.

In the midst of this chaos stands Tayna, a runaway orphan from the streets of our world, who must make an impossible choice: find the parents she had thought were long dead…

…or embrace her destiny and save the freaking world.

It's easy to call yourself the queen of rejection and champion of the timid when things are going well. But the mark of a real hero is how she copes when life serves her a pile of real suck. Well, here cometh that suck. (Book 2 of Finding Tayna.) – Jefferson Smith

Sadness. There was no other word for it. More than just a feeling, it was a throbbing, convulsing presence. Like a snake living in her guts and entwined around her heart, pressing outward against her lungs. It kept her from breathing. It kept her from thinking. All she wanted to do was curl up and hide, but how do you hide from something inside you? Something that was part of you? The blackness in front of her tightly clenched eyes began to sparkle. A tingling sound rattled inside her ears, and her head began to float away. Holding her breath seemed to keep these images at bay, but was it worth blacking out? Probably not. Tayna sucked in a ragged new breath.

And then she was five.

"Don't you know how to dress yourself?" The ugly Sister loomed over her with glaring, angry eyes. The woman's face shook and spittle flew from her mouth as she leaned in close, shouting and gesturing. Sister Critica. She was like that. Tayna looked down at the shirt and pants that Debbie had helped her put on. What was wrong with them? Her shirt was tucked in. Her socks were pulled up. Why was Sister Critica so mad?

"It's got flowers," Tayna said. All of Tayna's shirts had flowers, but this was her favorite. It was orange and cozy and it had three yellow flowers stitched on the chest.

"New rule!" Sister Critica barked. "No adornments! Now get back up there and put on a decent shirt, and be quick about it!"

"What does 'adorements' mean?" Tayna asked.

The nun rolled her eyes and leaned in closer, her nose almost touching Tayna's forehead. "Adorn-n-n-ments, you idiot girl! Adorn-n-n-n-ments! It means pretty things. Fifth floor girls may no longer wear frills on their clothing! And that includes flowers. Now march!"

All chatter in the busy dining hall had stopped and everyone turned to watch. Tayna felt her lip beginning to tremble. "But Sister, all my shirts got adorements on them. They're just flowe—"

"Are you deaf as well as stupid, girl? No adorn-n-n-n-n-ments!" She dragged out the 'n' sound for a long time, making fun of Tayna's mistake. "No flowers! No ponies! No kittens! No puppies! No initials! No stripes! Plain, stupid garments, for plain, stupid girls! Just be glad you're still allowed to wear colors! Now go!"

No flowers? But… But… All her shirts had flowers. If she wasn't allowed to wear flower shirts, she might have to come back down in an undershirt. Everyone would see her in her underwear! "But—"

"I SAID GO!" Sister Critica shot out a hand that quivered with barely suppressed rage, pointing up the stairs.

Tayna bolted toward the staircase before the yelling turned into hitting, but her eyes were all blurry and she couldn't see. She tripped and fell hard on her knees. Behind her, all the nuns began to laugh, but Tayna ignored them. Stupid nuns were always shouting and laughing at her. She wiped her eyes quickly on her sleeve as she stood up, so that the nuns wouldn't see. They would only get meaner if they saw her cry. But what was she going to do about a shirt? This was so unfair!

She was all the way up to the second floor landing before the tears came.

The memory subsided as the air in her lungs went stale, and Tayna held her breath to prolong the quiet, but even that couldn't keep the remembered feelings from pressing in on her. The shame. Humiliation. Sister Critica had known full well that Tayna loved plants and flowers. As a little girl, she had drawn them every time she was allowed to hold a pencil. She'd made up songs and stories about them. She'd even snuck up to the roof to visit Sister Diaphana's garden once, and received a week of punishment when she'd been caught. She'd known the Goodies would be furious and that their punishment would be brutal, but she'd gone anyway. Such pretty flowers. And the smell of a hundred things growing. It had all been worth it. That's how much young Tayna had loved flowers and greenery.

So obviously, if any piece of clothing had ever come up to the fifth floor with even the slightest touch of floral decoration on it, Tayna had been drawn to it like a magnet. Debbie had been the Senior Girl in those days—one of the good ones. In hindsight, Tayna realized that the older girl had probably felt sorry for the strange little dark-haired girl. The one the nuns all loved to pick on. For whatever reason, Debbie'd made sure that, as often as possible, little Tayna got first pick of any new flower clothes.

Everyone had known about Tayna and her flower shirts. How could they not? And looking back on it now, it was so obvious. Critica's new rule had been aimed specifically at her. Tayna. Sister Critica hadn't justhappenedto notice her shirt. She'd been standing there,waitingto notice it.

And she'd been waiting for what happened next too.

As young Tayna stomped back down into the dining room, those children closest to the stairs began to titter. Their mirth spread like a crackling fire, as each girl nudged her neighbor and cocked a head toward the brazen little kid sauntering across the floor, heading back to her job scrubbing pots in the kitchen. Tayna had spent ten whole minutes going through every single shirt she owned, but each of them had boasted some kind of picture on it that was now against the rules. She'd tried turning them inside out too, but even at five years old, she'd known that the visible, flower-shaped stitching on the inside of the shirt would be enough to get her yelled at again. So she'd made the best of it, and now strode proudly across the dining hall floor wearing her new, legal, spring ensemble.

She made it three-quarters of the way to the kitchen door before she felt the grasping claw of a Goody bite down on her shoulder.

"What do you think you're wearing now, girl? That's not proper dress!"

Tayna twisted in Sister Critica's grasp and glared up at the woman defiantly, jutting out her little chin. "It is too! Lotsa girls are wearing the same as me right now! Look!" She waved her free arm at the crowd of onlookers, who just gawked back at her, but the old crone never broke eye contact.

"They are wearing them properly, you little sprat, and you know it! Now take that ridiculous skirt off your shoulders and go find something more appropriate to wear. This is a proper home for proper little ladies, and we'll not have you parading around with that tom-foolery draped about you like some street urchin. Now go!"

This time however, instead of crying, Tayna got mad, and she whirled to face the cruel old woman, stamping her foot and matching her, fury for fury, with her little arms crossed over her chest. "No!" Tayna shouted. "You do it! You know I don't got one! If you want me to wear an ugly shirt, then you go find one, 'cuz all my shirts are pretty, and you're the one who knows where ugly stuff comes from!"

The silence that filled the room was so complete that it radiated for several blocks in every direction.

And then Sister Critica grabbed her.

By the time the old woman was done, Tayna stood in the center of the dining area, on display for all to see. Her ingenious little skirt-shawl had been ripped from her and torn to pieces. Her jeans had been yanked down and pulled off, along with her socks and shoes, and it all now lay in tatters on the floor, leaving Tayna standing alone in the middle of the room, shivering in front of the entire orphanage—every girl and every nun—in nothing but her little pink underwear.

"Let that be your lesson, then!" Critica thundered. "If you cannot follow the dress code, then you will not be allowed to wear clothing! You will stay that way for the rest of the day, and for every day until you can findproperclothing!" Then she whirled to glare at Debbie and the other fifth floor girls who were now peeking out from the kitchen door. She raised a bony finger to single them out. "And don't let me catch any ofyoutrying to help her either!"

Tayna tried to keep her lip from giving way, and she might have made it too, if the other nuns hadn't started to chuckle. First Sister Anthrax had snorted one of her vile choking cackles, but it seemed to catch on and soon all of them were doubled over with delight, laughing and pointing at the helpless girl in the middle of the room. It wasn't long before the fourth floor girls joined in, and even some of the older third-floors.

Which is when Tayna's lip finally surrendered and the flood-gates opened. She'd tried to be brave. She'd tried to stand up, but it had been no use, and now every person in the Old Shoe hated her and was laughing at her, and seeing her bare arms and legs and her skinny little tummy. It was total humiliation. So five year old Tayna did the only thing she could do. She stood there, in the center of the cold and laughing orphanage basement, and cried her heart into tears.