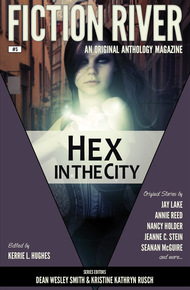 Hex in the City by Fiction River

Urban fantasy offers a diverse playground for some extremely powerful stories. Professional writer and editor Kerrie L. Hughes pulled some fantastic tales out of fourteen top writers for this fifth installment of Fiction River. Set in urban lands from modern Portland, to a future Detroit, to a wild Washington, D.C., and ending the tour in London, these top writers take the idea of "Hex" and stretch and twist it into stories with a magickal grip on the imagination.

My husband Dean Wesley Smith and I are the series editors for Fiction River. What that means is this: we pick the actual editors and make sure that the story quality in each volume remains high. Sometimes we edit a volume, and often we ask others to do so. Kerrie L. Hughes has made a name for herself editing great urban fantasy anthologies. Hex in the City is one of them. It also includes our token male writers. The stories in this volume cover the gamut of urban fantasy. Kerrie's edited other Fiction River volumes. If you like this one, you might want to pick up those as well. – Kristine Kathryn Rusch

Welcome to Hex In The City. My name is Kerrie L. Hughes, and this is the fifth issue of Fiction River. Hex In The City, as you may have deduced from the title, is paranormal urban fantasy.

If you aren't familiar with the genre and are a bit squeamish about reading a collection filled with romance and sweet adorable vampires, don't be: there will be none of that nonsense here. My playground of the paranormal involves ghosts, witches, zombies, and magick.

Why do I spell magick with a k? Because that's the spelling I found on the cover of Giovanni Battista Della Porta's, Natural Magick, first published in 1658. He was a true polymath who believed magick was a science and transcribed his knowledge for fellow scholars so they would know the difference between chicanery and facts.

The word hex is also a deceptive word; most people believe a hex is a curse, which is only partly true. Hex is actually an extension of the German word Hexen, which loosely translated means witch, or a caster of magicks. Therefore a hex can be any form of magick: good, bad, or indifferent, just like the caster.

As to cities: what better place to practice magick than in the city? Especially our modern cities where anything can happen and people are strangers, the stranger the better. Oh look! Is that a vampire on his way to work at the stock exchange? Is that an elf at the coffee house wearing brightly colored clothing and drinking a latte? Maybe I'm actually a witch collecting stories from the talented bards I meet and compiling them into anthologies for my fellow paranormal siblings to read.

Anyway, I want to thank Kris and Dean for letting me play in their kingdom. Over the years I've collected many an enchanting story from them for my other anthologies and when they formed Fiction River they were kind enough to include me. I really do think of them as the King and Queen of Storyland.

I also want to thank their publisher, Allyson Longueira. She's the Enchantress that makes everything at Fiction River come together on deadline and with proper formatting. Allyson has a special magick when dealing with people and writing, she throws tangles in the air and they come down as intricate Celtic knot work; a spell I must get from her.

Seriously though, I've been reading, writing, and editing paranormal urban fantasy for quite some time now, and this collection is the best one I've put together so far. I can't wait to do it again.

Hags and Witches; (hugs and kisses, get it?)