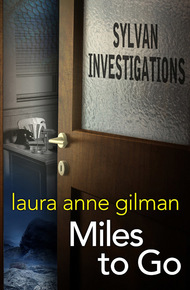 The person you pass on the street…may not be human.

They are known as the fatae, the various non-human species that make up the Cosa Nostradamus, the magic-using community. And they could be your neighbors, your teachers, your fellow commuters. Your local PI.

For the most part, Danny's made his own way, straddling the line between human and supernatural in his job the way he does in his life So it's an ordinary job, when he's approached by a young woman who has information he needs to solve a missing person's case. All she wants to do is help. But the cost of that information will change Danny's life…forever.

Laura Anne and I have a history together. We used to edit for traditional publishing companies. In fact, Laura Anne bought the first books in my Retrieval Artist science fiction series. At one point, I told her the same thing another writer/editor had told me: you'll have to choose between working as a traditional editor and your writing. Fortunately for all of us, when the time came, Laura Anne chose writing. She writes as eclectically as she edited. Miles to Go falls into her Cosa Nostradamus world, and combines two of my favorite things: magic and mystery. – Kristine Kathryn Rusch

My back hurt, my horns itched, and I was pretty sure that burrito for lunch had been a mistake.

"Danny, oh Danny." The miserable fucker had the balls to smile at me. "You know I never bluff."

It was summer. Some places in the city, summer's nice. You get out by the water, maybe Orchard Beach or Coney Island, or even the Seaport if it's not too crowded, and the salt air and breeze touches your skin and you're seventeen again. And the Green, what humans called Central Park, was a blessed respite, even on the worst days.

But inside the city itself, locked within the henge of buildings that reflected heat and cast it back to the pavement which in turn shoved it up into living tissue, summer was miserable. I wanted to be somewhere with clean air, cold water, and a colder beer. Instead, I was stuck on a park bench in midtown Manhattan, watching tourists pile on and off those damn tourist buses.

The last round had been a mistake, last night. So had the first round. I'm not much for drinking - my years on the force showed me how badly that could go wrong, and my father's genetic inheritance makes me prone to overindulgence. But an old friend was getting married next week, and the least I could do was go along with the bridal shower, make sure nobody got in trouble.

Everyone, of course, had. And now I was paying for it. At least the sweat was soaking the toxins out of my system, right?

Anderlik, next to me, smiled again. His teeth were perfectly capped, his skin naturally tanned, and his eyes flat and ugly as the pavement. His hands rested on his lap, and I noted that the creases of his pants were perfectly pressed, even in this heat. Bastard.

"So, if you're willing to negotiate," he went on, "I think we can come to an amicable position that leaves everyone satisfied."

One of the double-decker buses I'd been watching pulled up and disgorged its passengers, overwhelmed families tumbling off onto the sidewalks, fanning themselves with cheap folding fans, hats, and folded brochures, their faces red with sweat and bright with excitement. Mothers and sons, fathers and daughters, young lovers and wait for it, a pack of teenaged boys, out on a lark, not minding the heat. Sixteen, tops. They came off the bus last, already looking for their next big thrill, their body language practically screaming 'fresh meat.'

I saw my target then, oozing his way through the crowds like a proper snake, eyes beady and tongue practically scenting his prey in the air. Another two-three minutes, and he'd be on the boys, dropping lures and seeing what he could catch.

Not this time, I thought, standing up.

My fist was almost an afterthought, hitting Anderlik a solid three-quarter blow on his perfect nose.

"The photos haves already gone to the PUPs," I told him. "You're going to have to negotiate with Venec. Have fun with that."