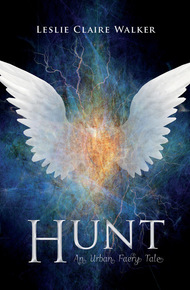 Leslie hails from the concrete and steel canyons and lush bayous of southeast Texas. She now lives in the rain-drenched Pacific Northwest with a cast of spectacular characters, including cats, harps, and fantastic pieces of art that may or may not be doorways to other timelines.

She is the author of the Faery Chronicles and Soul Forge, two complete urban fantasy series set in the same world and filled with found family and kind badasses.

Blowing off steam at a Saturday night party with the girl you really want to date can lead to hearing your friends' thoughts, pissing off the Faery King, and imminent mortal danger — if you're sixteen-year-old Kevin Landon, instant freak.

His new normal: A best friend with a mind-blowing secret. A rock-n-roll siren doomed to lose her humanity. A father obsessed with a life stolen before its time.

The Faery King weaves a powerful trap to snare them all, leaving Kevin with only one way out. He must find a way to wield his magic before time runs out for the people he loves. If he fails, everyone and everything he knows will be lost.

Leslie Claire Walker calls her novel Hunt an urban faerie tale. It is, but it's so much more. Leslie has an enviable ability to make a reader fall into a story. I've read a number of novels and stories set in her worlds, and they are so real they feel like my own memories. She also has her finger on a young adult pulse—not by talking down but by dealing with deep, dark issues that all of us have to deal with. Leslie's stories have a healing power. You'll see what I mean when you read this one. – Kristine Kathryn Rusch

Kevin didn't like it. Then again, what had he expected? That shady Oscar would send them to a sunshiny place?

Rude turned onto a dead-end street skinny enough to be an alley, warehouses with boarded windows growing up three stories on either side. The address they'd been looking for? Spray-painted in fluorescent orange on the last building. All dark, no sign of life that Kevin could see.

Not so with the rusted yellow school bus that rested in front of it. Faint light shone inside the thing's windows and open door.

"Oscar sent us to a school bus?" Kevin asked.

And now he felt like he'd been pulled into a very special episode of RUDE'S BEEN HERE BEFORE.

"It might take us a while to get inside," Rude said.

Rude laughed and hopped out. "C'mon."

Kevin did. "Who's the girl you mentioned earlier?"

"I couldn't tell you about her if I wanted to, Kev."

In the shadow of the warehouses, Kevin saw hardly any stars, fewer even than at home. The red light of a passing plane winked overhead. A breeze kicked up, sweeping a crumpled newspaper in the gutters.

Their shoes crunched on broken beer bottles. The temperature dropped the closer they drew to the bus. The cold knifed through his clothes, turned his skin to gooseflesh.

Rude stopped before he got to the door. "Oscar sent us," he called.

Kevin sidled up to him and kept his voice low. Not sure why; but it seemed like he ought to stay quiet. "You sure anyone's home? It's early, but maybe they took off already."

A wind blew again—this time from inside the bus. The hairs on Kevin's arms stood up like antennae.

A well and truly freaked-out cue. "Whatever you say."

Rude climbed the steps. Kevin half-expected him to get struck by lightning or vanish into thin air. Why would he think that?

Any case, nothing bad happened. Rude glanced over his shoulder. "It's all right."

Kevin didn't wait to be told twice. His life may have taken a dumpster dive in the last couple of days with people talking about him behind his back, but whatever they called him, it wouldn't be chickenshit.

He shouldn't have worried. He'd been right—no one home. Plus, the occupants had to be hippies. Or else hippies had exploded all over the inside of the bus.

The sweet scents of pot and patchouli incense permeated the whole place. Tiny, tinkling wind chimes hung near the windows. Every available ceiling space had been papered with black-light posters, so many he couldn't make out the images on them. Along the edges of the center aisle, candles burned in deep glass jars, their glowing wicks almost drowned in melted wax.

Bicycle handlebars and chains and pedals lay strewn on the ripped vinyl bench seats. Except on every third seat, where pillows and blankets had been gathered into piles to protect unframed oil paintings on stretched canvases. Good paintings, as far as Kevin could tell.

The longer they stood there, the thicker the air got. And charged. With electricity. The kind that shocked. Or if it got strong enough, the kind that could do some damage. It wasn't enough that the hair on his arms stood up. All the hair on his head did, too. Rude got lucky, having that buzz cut.

"She wants a song," Rude said.

"The one who lives here. They want offerings, or we have to leave."

Rude launched into a rousing, off-key version of "Every Rose Has Its Thorn." Which Kevin couldn't believe Rude even knew. Kevin had never heard him sing before, and he felt pretty sure he never wanted to again. The whole thing couldn't end fast enough.

When it did, the quality of the air had changed. He could breathe better. He didn't feel like he might be electrocuted any minute.

And there was a girl at the back of the bus. A girl with actual attached gossamer wings.

Shaggy red hair streaked with purple framed the porcelain skin of her face. Her blue eyes glinted with—Kevin could only call it power, no matter how fantasy-movie that sounded.

She wore a sleeveless, gauzy black dress that had been shredded on the bottom. As she walked toward them, Kevin could see a lot of leg and a pair of scuffed black combat boots. Her dress dragged through the burning candles, but it didn't catch fire. And those wings? They looked like they belonged to someone more delicate, more angelic. He could see the muscles in them move, the blood coursing rhythmically in their veins.

He stared. He couldn't think of anything else to do.

She didn't return his gaze, though. She only had eyes for Rude.

"What do you want?" she asked, in a voice that raked through Kevin like fingernails on a chalkboard. Definitely not delicate.

"How obvious," she said. "Do you want a spell cast? Information? A curse? Do tell."

A curse? Kevin tried to step back, to put a little more distance between himself and the magic curser, but his feet wouldn't move right.

Rude crooked a thumb in his direction. "It's for him."

"But you made the offering, Rudolph Diamond Davies III."

"I want you to help him," Rude repeated.

"You know it doesn't work that way," she said.

The conversation reminded Kevin of the things Oscar said back at the restaurant about Rude paying a price for breaking the rules. As in, his friend argued with this girl about paying another price. For him. Nothing wrong with helping out a friend, but this didn't feel right. He didn't want someone else paying his way.

"What way does it work?" Kevin asked.

The girl turned to him then, and he wished he'd zipped his lip. The full force of her gaze burned him. And not in a good way. Also, his eyes had to be broken, because he could swear that hers were ringed in red. People didn't have red eyes. Supernatural-movie bad guys, maybe.

"Do you want to bargain for yourself, Kevin Xavier Landon?" she asked.

In two seconds, she ruined all the work he'd done since kindergarten to make his friends believe he didn't have a middle name. Also, it didn't help that he blushed. He couldn't help himself.

The girl waited for an answer.

Kevin heard that loud and clear. Oscar's words scrolled across his mind, that the ability to hear thoughts went hand in hand with imminent mortal danger.

Rude wanted him to watch himself. That meant whatever Kevin decided to do—or not—could get one or both of them killed. Wasn't that sweet?

He had a very strong urge to bolt out of there. He might've, except he still couldn't make his feet move. And leaving? That would be a decision, too. Wrong or right?

"What does 'bargain' mean?" he croaked, then cleared his throat.