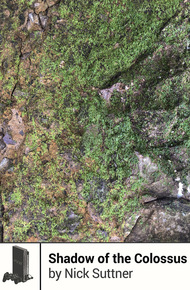 Bearded indie game advocate Nick Suttner has written for EGM and 1UP.com, brought tons of rad games to PlayStation, and is an unlockable announcer in Johann Sebastian Joust. He lives in San Francisco with his girlfriend, his cat, and some plants and candy bars.

Boss Fight Books: Shadow of the Colossus by Nick Suttner

A massive, open world, brimming with mystery. A gauntlet of giants to overcome, living levels that must be destroyed... but to what end? Since its 2005 release, Fumito Ueda's minimal-yet-epic masterpiece, Shadow of the Colossus, has often been hailed as one of the greatest video games of all time.

But why is Shadow still utterly unique over a decade later? Nick Suttner examines this question and others while journeying across Shadow's expanses—stopping along the way to speak to developers about the game's influence, examine the culture around its unfinished mysteries, and investigate the game's colossal impact on his own beliefs about games, art, and life.

"One of the standout video game books of 2015, and now available on StoryBundle. This lyrical ode to the classic Fumito Ueda-led game is a passionate and delightful read - so happy to be featuring it here." – Simon Carless

A massive, open world with almost nothing in it. A big-budget game that's more interested in exploring the experience of its questions than distracting you with answers. An unwavering trust that players will figure out where to go, what to do, and even think about why they're doing it. Shadow of the Colossus is a landmark in so many ways, and still unique more than a decade after its release.

It's also a study in focus, as it was in its time amongst its peers. Resident Evil 4 released earlier that same year in 2005, revitalizing the entire survival-horror genre with a tight over-the-shoulder perspective that made combat a tense, precise nightmare. Just a couple of months later came God of War, a bold and bawdy exploration of Greek mythology with a deeply satisfying bloodlust.

All three games have since seen HD re-releases and are considered seminal events in gaming history. Yet bothResident Evil 4 and God of War hew closely to convention, very much gamers' games filled with inventories, attack combos, and carefully scripted moments always upping the ante. Both games are also very filmic, with long expository cutscenes wrapped around every big event, and a monologue for every hero and villain that dives deeply into their lore.

Clearly, 2005 was an incredible year for games. But what interests me is just how far Shadow swung away from those other hits. Its reductions were across the board, and uncompromising: Only sixteen "enemies." Only two weapons, both of which you start with and will never level up. You'll never learn new moves, only strengthen your grip and your health over time. You won't unlock new areas, only new challenges in places that have been accessible all along. You won't meet any new main characters after the opening cinematic. There's (almost) nothing to collect.

Yet despite all that isn't there, Shadow is absolutely riveting. At a time when games were doubling down on the gamer by betting big on proven formulas, and leaning on the legacy of film to tell their stories, Shadowwas content to spin its mystery up front and shove you into the blinding sun to fend for yourself and figure out the rest. The entirety of the experience lives deep within me, like some primordial dream. Soaring high above the sprawling desert, clinging to my foe as the wind laps at my unsteady feet. Finding the relief of fire at the bottom of a treacherous crevasse, itself in the shadow of an ancient, endless bridge.

I first read about Shadow in the pages of Electronic Gaming Monthly, a long-running gaming magazine I would later write for. A game in which entire levels were puzzles set atop the backs of massive creatures, the promise of an epic puzzle-platformer from the team behind the thoughtful, sweetly haunting Ico. Building on their craft and artistry, Team Ico's Shadow promised action, and a gauntlet of giants to conquer. Its titular creatures were striking, even in those early screenshots. Towering, dimly sentient relics with piercing yellow eyes and mossy manes. I was smitten.

In broad strokes, Shadow is about a boy trying to save a girl. The situation is dire, and his last hope lies in a distant, long-abandoned corner of the world. He brings her to this place, throwing himself at the mercy of its overseer. This spirit tasks him with defeating a number of guardians that dwell within the land, and in exchange there may be a glimmer of hope for her yet.

But like so many wonderful moments in life and art, Shadow of the Colossus is defined by the space between its lines; the gulf between its quieter, contemplative moments and its tremendous spectacle. Strung end to end, its titanic battles would make for an amazing — if exhausting — barrage of action. But driving your horse across an imposing sun-baked expanse, twisting up through shade-mottled woods, only to find your ageless, unwitting foe at rest in the stillness of a lake gives the encounter exactly the breathing room it needs. Shadowlets its best moments come to you at your own pace, subtly leading and showing rather than telling.

There were rumors that Shadow was originally planned to have whole cities and dungeons dotting its spartan landscapes, lost in time to schedules, or budgets, or something equally mundane. And one of the best, most wonderful things about it is that it feels that way. The remnants of a world that once was, or never was, frozen in time. A lost civilization perpetually under construction.

There are so many empty, functionally useless corners of Shadow's expansive world, but it hurts to even call them that. They always felt alive and mysterious, as if exploring the right nook or climbing an especially precarious peak would unlock…something. A bridge to that lost civilization, a seventeenth colossus, some armor for my horse maybe. Despite its creator Fumito Ueda telling me years ago in an e-mail interview that all of Shadow's secrets had been found, it never felt that way, and still doesn't.

Thankfully, the legacy and lessons of Shadow live on in gaming today, through a generation of fans, artists, and especially game developers whose work carries its influence forward. Game development has become democratized in recent years through cheaper and more user-friendly software while the audience has expanded tremendously through more ubiquitous platforms to play on. As a result, many players are looking for more varied games across the full spectrum of human experience, and some of the themes that Shadowexplored — such as hope, regret, and sacrifice — have become both easier and more commercially viable to express. At the same time, series such as the Dark Souls games have built on Team Ico's legacy, dropping players into vast, unforgiving worlds that seem to have existed long before they came along, with narratives that unfold through gameplay as much as through storytelling — no doubt influencing a future generation of developers to live by the tenets of trusting and respecting their players while giving them something surreal and spectacular.

Oh right, and I'm Nick Suttner, bearded indie game advocate. After writing about games for EGM and 1UP.com (where I hosted a retrospective podcast series on Shadow), I went to work at Sony to help shape the culture of independent games on PlayStation. Shadow is the entire reason I'm working in games, and specifically the reason I went to work at Sony (which published the game). I've spent almost nine years in the gaming industry championing the more artful, emotional, intellectually stimulating side of gaming, and truly, Shadow has been my constant muse.

My endeavor here as your guide, as a Shadow devotee, and as someone whose career and personal aesthetic has been so deeply influenced by the game, is to dig into the experience and unearth just what makes it so special. Why is Shadow still so singular over a decade later? How has it managed to maintain an air of mystery beyond that of any other game? I'm hoping that you've played Shadow already, but if you haven't made time for it I'm happy to give you an excuse. Consider this your companion guide — I'll be playing through it again with a critical eye, talking about it with others who love it the way that I do, and sharing my findings along the way. To maybe even find that elusive quality that encapsulates the game's enduring appeal. Or maybe not, and to instead just get lost in the roar of the earth once again.