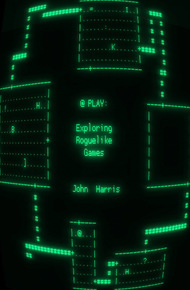 Originating on indie gaming news site GameSetWatch in 2006, the column @Play coveres all aspects of the niche-but-awesome genre of roguelike computer games. They are all based on concepts originating from the classic 1980 Unix terminal game Rogue, which used random generation (these days sometimes called "procedural content") to create new and unique play experiences with every game. Games such as NetHack, Angband, Dungeon Crawl, ADOM and Brouge have captivated discerning players for decades.

More recently the field of roguelike games has exploded onto the internet! Many of the games released on Steam now claim to be roguelikes. Are they really? What does that word even mean? This collection of some of the best columns from @Play's ten-year history, combined with new material not yet published, is an extensive meditation on what it means for a game to be roguelike: difficult, wildly surprising, bizarrely chaotic, and heaps of fun.

Just a few of the topics covered are:

"Commissioned exclusively for this Storybundle, Roguelike expert John Harris compiles and updates his much-loved columns for the GameSetWatch website & adds a number of brand new articles along the way. Randomly delicious!" – Simon Carless

Before we kick off this collection of essays on the niche-but-awesome genre of roguelike games, it should help to define what is meant by that term.

Roguelikes are dungeon-exploration computer games, patterned after their classic namesake Rogue, and set in a randomly-generated world. They are known for their tremendous difficulty, unpredictability, permanent character death, and the large number of methods they use to inflict that death. They were most popular in college computer labs in the 80s, and while they didn't achieve widespread success at the time, the genre nevertheless persists, and prospers, to this day, and its dedicated cadre of devotees will argue night and day that these are the greatest computer games ever made.

Just in case it isn't obvious by now: I am one of them.

From one perspective, the roguelikes are throwbacks. Here is a class of games, not really mainstream but not obscure either, that have largely resisted modernization. While it might be difficult for someone looking at Colossal Cave to connect it with being of the same kind as, say, Telltale's recent A Wolf Among Us games, your major roguelikes, by and large, will look similar to how they always have.

Although all of the major roguelike games (excepting perhaps Brogue) have color graphic modes now, they also retain their classic ASCII modes, and many other computer roguelikes use an ordinary text console window as their sole display. NetHack has inspired a number of attempts to give it fairly modern graphics, yet possibly the most-played form of the game even now, twenty years after it came into being, is on public telnet servers with hundreds of players, not tremendously different in appearance from Rogue itself back upon its release in 1980.

But while there is an air of the Neanderthal surrounding these games, they've survived for so long because, even after all that time, they're still so startlingly modern. Since Rogue was created, the grand parade of computer games is supposed to have advanced in every respect. Their graphics now approach the point where they are indistinguishable from reality. So it is damning indeed that many of them are not more interesting to play than an old terminal game that has barely changed in 36 years.