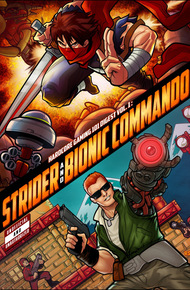 The first digest from video game website Hardcore Gaming 101 covers several topics for retro enthusiasts! Included are full reviews of the Bionic Commando and Strider series, two of Capcom's legendary franchises. Also included are reviews of several Strider-like games such Osman/Cannon Dancer, Run Saber and Moon Diver, as well as various grappling hook themed games like Umihara Kawase, Ninja Five-O and ChainDive. Also included is a look at Famicom games that were ported from Western home computers but not re-imported back for the NES, and capsules reviews of 80 import Japanese PlayStation games!

"The HG101 folks come through with this bite-sized but gorgeous look at two classic Capcom franchises, clones, and related titles, plus a host of bonuses. Nobody knows platform-specific game history like them! – Simon Carless"

Capcom's Strider series is set in the future, a time of the Striders, an elite group of counter-terrorists working to fight the evils of the world. The series chronicles the adventures of Hiryu, the greatest of all the Striders, who traverses the land with his cypher, Falchion. Cyphers are the standard issue weapons for Striders, which are the child of a tonfa stick and a light-saber. While Hiryu is skilled with his weapon and he's extremely acrobatic, he faces many antagonists, ranging from mechanical gorillas to reanimated mastodons.

Strider was initially conceived as a multimedia project, with an arcade game, a Famicom / NES game, and a manga published around the same time. While the arcade game has little to do with the manga, the storyline of the NES game ties in directly with it. The proposed name for the English version was "Falcon". The arcade game was directed by Kouichi "Isuke" Yotsui.