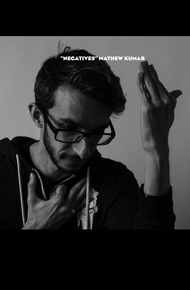 Who is Mathew Kumar? It's a question that Mathew Kumar likes to think people ask themselves, even if they know him. "Who is Mathew Kumar?" he imagines them asking out loud, as if to no one. "He's so mysterious. So international. So… alluring," they'd sigh, perhaps rubbing their finger around the ring of their drink, playfully, flirtatiously, as they imagine a tryst with the CEO and Creative Director of MK-ULTRA Games, a Toronto-based independent game developer. "Oh wait, that's right," they'd think, "that's who he is."

"Not so fast," another person might cry—jarred from their own reverie featuring the sexy Scotsman—slapping the drink out of the other's hand. "Don't you know he's a talented game designer and producer, having worked and consulted on titles such as Sound Shapes, They Bleed Pixels, Dyad and N++?"

"I did, yes. And I suddenly remembered that he's also got over a decade of experience as a games journalist and critic, writing for seminal outlets such as Edge Magazine, PC Gamer, Game Developer Magazine and not to forget his 'important but never influential' zine exp.. Anyway, are you going to get me a new drink or what?"

What is exp. negatives? Why exp. negatives is only the grooviest collection of pieces from the hippest video game 'zine you've probably never heard of! A selection of articles originally published between 2009 and 2011 taken from the wild mind of games journalist and critic Mathew Kumar, here you'll read everything from drinks recipes inspired by murder simulators to heartfelt letters to games publishers begging that they release the sequel to a game they'd lost a lot of money on.

Featuring fifteen articles all never published online in a collection exclusive to StoryBundle, you'd have to be a real square to pass up this opportunity, dudes!

"Mathew's physical Exp. game zine had some gutsy, offkilter game writing in it, and he's made some of the best content available digitally, exclusively for this StoryBundle." – Simon Carless

You know how it is with introductions, right? They never feel quite right. How can you introduce someone to anything, anyway? Don't you always grab one of those classics—your Moby Dicks, your Crime and Punishments—and just skip the introduction, because it's usually some arsey waffle where they spoil most of the book for you? (Though, honestly, the introduction to Moby Dick should really point it's mostly a load of tediously detailed wank about sailor's knots and out-of-date information about whale physiology.)

I mean, sometimes you go back to re-read them. Get a bit more context. Or finally read why X famous person/scholar liked this book so much to write an introduction after all. And I did think for a while about getting someone else to write this introduction. You know, someone who I admired, who had liked exp. enough in its original zine format that they'd bought it and championed it.

I've got to say though... that was never really the exp. way. exp. was mine, and as much as people would seek me out to tell me how much they liked it, it felt like an open secret; popular for a zine, absolutely (thousands of copies were sold; though I've never counted) but it never made waves enough to feel like more than a special thing I was sharing with a select few. exp. slotted into that niche that all the best things lie: important, but never influential.

exp. is, if you'll allow me a tortured metaphor just so I can talk about a band I love, the video game zine equivalent of something like Aereogramme. Aereogramme, a cult Scottish rock band, known for a peculiar brand of deeply affecting angelic singing and grinding post-rock, ended after four albums and eleven years after what they called a "almost superhuman ability to dodge the zeitgeist." The band did, after all, watch much shitier contemporaries (*cough* Snow Patrol *cough*) get fat off a field furrowed by them. But Aereogramme are one of the greatest bands ever. You just have to be clever enough to see it. And if you were clever enough to see it, you probably jealously guarded them; why ruin something by letting it get, and we shudder, *popular*?

I didn't start writing exp. so I could fold creating a magazine into a consultancy, or start throwing parties for games companies, or sell out in some other embarrassing fashion. None of these things happened. I started exp. because video game writing is and was utterly shite across the board, and I just wanted to try and create something a little better, something completely mine. I'm not going to pretend, however, that what you're going to read here are the most mature and meaningful articles you'll ever read—in fact, you'll probably be confused at what you see as a motley grab-bag. But these are articles that I've realised, as time has passed, that I can be very proud of.

This collection includes a selection of pieces from exp. minus one, zero, infinity, and minus three, articles written across 2009 to 2011. The pieces included are all the most text-heavy, because they work in an ebook, and frankly because it protects the sanctity of the original issues that the weirder, more experimental pieces aren't here. (I did, after all, once say I'd never republish these; certainly I'd felt I'd never publish them like this.) The only article here that isn't presented as close to original form as possible is, unfortunately, the VVVVVV one, because there's literally no way to turn text upside down in an ebook without breaking all the formatting. Please read the article by turning the phone upside down every other paragraph or something, ok?

So here is exp. then. I hope you like it enough to jealously guard it, and never let it become popular.