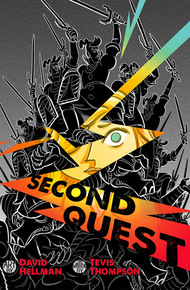 David Hellman is best known as the visual artist of the acclaimed indie videogame Braid and co-creator of the "cult classic" web comic A Lesson Is Learned But The Damage Is Irreversible. He's been publishing comics for a decade, but Second Quest is his first long-form work.

Tevis Thompson is an independent writer and critic. He's best known for incisive, iconoclastic essays such as "Saving Zelda" and "On Videogame Reviews".

Second Quest is a graphic novel about a girl who does not accept the world she lives in. It's a meditation on videogame culture and its most beloved legends. It's a story of the islands we inhabit and why we refuse to leave. It asks what it really means to have courage.

"After a successful Kickstarter, this touching graphic novel from Braid's artist Hellman and veteran writer Thompson is a charming, gorgeously illustrated look at a Zelda-inspired fantasy world." – Simon Carless