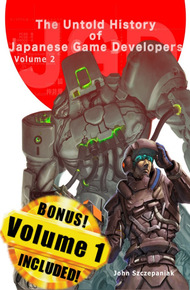 John has been a journalist for over 10 years, and has interviewed over 200 people. He also enjoyed a six month stint as Staff Writer on Retro Gamer and three years as sub-editor at Time Warner. He's licensed by the UK's Royal Yachting Association as a naval skipper, and also holds a Marine Radio Operator's license. MENSA certified, speaks Japanese, programs indie games, and brews wine.

Nearly 400 pages and over 30 interviews, with exclusive content on the history of Japanese games. The origins of Hudson, Masaya's epic robot sagas, Nintendo's funding of a PlayStation RTS, detailed history of Westone Entertainment, the formation and collapse of Human Entertainment, and a diverse range of unreleased games. Includes exclusive office layout maps, design documents, and archive photos.

In a world first - something no other journalist has dared examine - there's candid discussion on the involvement of Japan's yakuza in the games industry.

"If anything, this gigantic book of exclusive Japanese game developer interviews and history builds on the first. There's histories of Hudson, Human Entertainment, Nazca (Metal Slug), and a multitude of other individual devs. Plus, Vol. 1 is included as a bonus if you didn't pick it up already!" – Simon Carless

Satoshi Nakai: Did you know that Masa Suzuki-san's works, Leynos and Valken, are actually connected? After the ending of Valken, if you just let the game run by itself for a few minutes, a short conversation appears. Maybe all you experts already know about this?

Masayuki Suzuki: Here's another secret: On the colony stage of Leynos, there was actually a feature in which gravity operated upwards and downwards. This feature was omitted during development, but the map graphics were created, and there is an inverted cityscape at the top of the screen. You can actually see it just a little if you jump immediately upon entering the colony, and accelerate upwards with the vernier thrusters.

JS: About Valken - Nakai, you came up with the idea of the walls showing damage when you hit them?

SN: It goes back to Leynos. If a bullet hits a gasoline tank, it explodes like you would expect. And if a bullet hits a cannon, the cannon also becomes damaged or destroyed. I thought, if that's the case, then why not also shoot out the floor? I remember the programmer hating the idea. But I suggested making minor things destructible in every stage, and we talked about how that had never been done before.

JS: Some games borrowed the idea. Have you seen Metal Warriors by LucasArts? The planner was influenced by Valken.

SN: I am familiar with Metal Warriors. I think it was the one Konami published for the Western market? I recently watched it on YouTube for the first time in a long time, and the resemblance is even stronger than I had remembered. I'm happy that I was able to make something that someone considered to be worth imitating. After all, copying all sorts of games and movies is how I got started, too! I know we made Valken 20 years ago, but I'm still quite proud of it.

JS: Was anything left out of Valken?

SN: So many things got cut that if you got me to start listing them, you'd end up having an entire extra volume of "Untold History" on your hands! Back in those days, we'd only have between six months and a year to make a game, so there were always mountains of ideas we wanted to include but couldn't.

Even as we were making the games, new ideas never stopped flowing. Like, whenever a programmer would come up with something, they'd get all excited and say, "Look what I managed to get working - we should use this!" But then admit, "We don't have time now, but if there's a Valken 2, let's put it in that!"

When we were staying overnight at work, we'd end up drinking until morning at a bar in Nishi-Azabu, talking about those ideas. Sometimes they found homes in other projects. Every day was a blur of "This is fun!" - "We need more time!" - "I'm tired!" - "I had another idea!" It was such a wonderful time. I'm so grateful I was able to be a part of that.

JS: Oh, to rummage on the cutting room floor!

SN: There was one idea we had to cut from Valken. It was called the "X-System". Looking at it now, that sounds pretty lame... Originally there were two starting points: The Moon and the Earth. And two ending points, also on the Moon and the Earth. The Atmosphere stage was between them, so the stages were arranged in an X pattern, with players able to proceed through Earth-Atmosphere-Space, or Space-Atmosphere-Earth order. Of course, players would also have been able to finish by going in an Earth~Earth and Space~Space order.

JS: You were involved in Gun Hazard, which had a similar style of gameplay.

SN: Basically we wanted to do a sequel to Valken, on a larger scale. And we thought that some role-playing elements were needed to extend the play time. We discussed this from the beginning. And personally, I wanted to design something bigger, something more amazing that I wasn't able to do in Valken, like larger enemy characters. More generally, I wanted to create the sense of destroying things on a larger scale.

JS: Gun Hazard was by Omiya Soft, but marketed as part of Square's Front Mission series.

SN: This has to do with Masaya, but there was a producer at Square, Tsuchida-san, who had previously left Masaya.

MS: His first name is Toshirou. More recently he was working at Gree, but he may have left already. He was a manager of development at Gree.

SN: So Tsuchida-san from Square had some sort of conversation with Omiya Soft. I don't know what they discussed specifically, but through that process, they arranged for the developers who had created the graphics and program for Valken to work on a new title attached to one of Square's brands, and make one of the last big action games for the Super Famicom.

MS: Backing up a little bit, first of all, Tsuchida-san created this, a strategy game... <picks up PC Engine game Kai-Serd, humorous tone> Oh, that's right! These two games are brothers! <holds Leynos and Kai-Serd side by side> Originally, the idea was to do a huge project encompassing a strategy version and an action version released at the same time, with a crossover story between the two titles. So you would have an action game and a strategy game set in the same universe, released on the Mega Drive and the PC Engine, respectively. But because of various circumstances, the games diverged into their own universes. This one, Leynos, was programmed by Hideo Suzuki, who later went to Omiya Soft, while Tsuchida-san acted as the producer for this one, Kai-Serd. After that, Tsuchida-san left Masaya and went to Square, where he created another robot strategy game, Front Mission. Meanwhile, Hideo Suzuki remained at Masaya and created Valken.

JS: Wow, so they are all connected!

MS: After creating Valken at Masaya, Hideo Suzuki and his team left to form the independent company Omiya Soft. But for Gun Hazard, he and Tsuchida-san reunited, just like old times. They went back to the plan they had originally devised, to create a strategy game and an action game set in the same universe. So that's why we have Front Mission and Gun Hazard from Square.