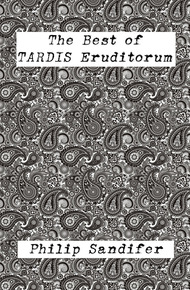 Philip Sandifer is a PhD in media studies and freelance writer focusing on television and comics.

The Best of TARDIS Eruditorum by Philip Sandifer

The Best of TARDIS Eruditorum collects twenty-one of the best and most popular essays from Philip Sandifer's acclaimed blog TARDIS Eruditorum, accompanied by short introductions to each essay that are exclusive to this volume. Covering the series from the early Hartnell era up through the David Tennant eras, this book provides innovative and exciting new perspectives on the history of Doctor Who.

Introduction: A Mad Man With a Blog

I’ve never actually put this introduction in a book. No particular reason - I just wrote a different one when I collected the Hartnell posts into a book, and then kept revising that one, leaving this to gather dust at the far end of my blog. But since this is a collection of blogposts and not a volume of the book series TARDIS Eruditorum, it seems appropriate to reprint it.

Still, some explanation may be in order. TARDIS Eruditorum is a history of Doctor Who, though one not quite like most others. It goes story by story, but it does not purport to offer reviews of the stories. My opinions often shine through, but they’re not the goal. Nor is it a history of the making of Doctor Who - many of those exist, some of them quite good.

TARDIS Eruditorum is a history of Doctor Who as a cultural object. More broadly, it’s the history of a particular vision of the United Kingdom - one based on the peculiar relationship between the mainstream and the marginal within its culture - and of how that vision has evolved and responded to the last fifty years.

TARDIS Eruditorum is also a blog, and this book culls twenty of my favorite essays from the blog as a sort of preview. The title proclaims it The Best of TARDIS Eruditorum, but like most best-ofs, this is a lie – it’s really a smattering of posts that are some combination of popular and, in the author’s estimation, pretty good, with a selection bias that leans towards posts that follow from one another (so you can see the blog’s thought on the Cybermen evolve from the Hartnell to Colin Baker era) and an attempt to have around two posts per Doctor (Tom Baker and Sylvester McCoy get two, Eccleston and Tennant get one, the former because he only has the one season and the Rose post is very long, the latter because at the time of writing I’ve only done about five Tennant posts). If you like it, good news - the entire blog is available for free online. There are also three, soon to be four, book versions available on Amazon.

I should note that many of the essays - everything after the Third Doctor - are taken straight from the blog. They have not gone to the copyeditor I employ for the book versions, and may have typos or moments of mild incoherence. This should be treated as a marker of their punk authenticity and status as raw, honest prose. Or as something I just didn’t have the time to do in order to get this collection to the Storybundle folks.

Most of the posts on TARDIS Eruditorum are essays about specific Doctor Who stories, although other sorts exist. One sort, Pop Between Realities, Home in Time for Tea, covers topics other than Doctor Who in terms of how they intersect with Doctor Who. Three such essays appear here, in the Pertwee era and each of the Baker eras. The remaining seventeen essays are selected from across the history of the series, and include short introductions like this specially written for this collection.

If you like these essays, many, many more are available at tardiseruditorum.com, and new ones appear thrice weekly at philipsandifer.com.

All of which said, here’s how I introduced TARDIS Eruditorum when I started it.

About a month into its 48th year of existence, the Christmas special of Doctor Who was watched by one sixth of the population of Great Britain. I would compare that to some television show for Americans, but there isn't one. Nothing in America is that proportionally popular. Certainly nothing sci-fi or fantasy.

Doctor Who aired the day after the Kennedy assassination, an event it is weirdly and inexorably linked to. The show has not been on the air all 48 years since it debuted - only 32 of them - but there has not been a year when some officially sanctioned Doctor Who stories have not come out. And there is no reason why that should ever stop being true. Because there is no way to run out of Doctor Who stories. At least, not without running out of stories entirely.

Doctor Who is a story about a man with a magical blue box that can go anywhere and any time. The man is, for all practical purposes, immortal. When something happens that would kill him, he just changes into a new man and walks away to new adventures.

And so as long as there are stories, there are Doctor Who stories. When the stars go out and the universe freezes, around the last fire on the last world, there will still be Doctor Who stories to tell. And when we are done telling them, at long and final last, in the distance will be a strange wheezing, groaning sound. And out will step an impossible man, and he will save the day.

Because there's something you'd better understand about me. Because it's important, and one day, your life may depend on it.

I am definitely a mad man with a blog.