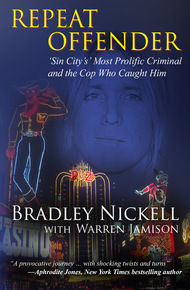 Detective Bradley Nickell is a twenty-three-year veteran of the Las Vegas Police Department. A first-person true crime account, REPEAT OFFENDER is his first book. Suspense Magazine named REPEAT OFFENDER the "Best True Crime Book of 2015." A native of Colorado, he has been married for twenty-six years and lives in Las Vegas, Nevada.

Las Vegas Police Detective Bradley Nickell brings you the inside scoop of his harrowing investigation to catch the most prolific criminal Las Vegas has ever known. Daimon Monroe looked like an average guy raising a family with his schoolteacher girlfriend, but just below the surface he was an accomplished thief and sex offender with an uncontrollable lust for excess. REPEAT OFFENDER gives an insider's view of the intense crusade to stop Monroe, set against the bright lights, colorful personalities, and seamy underbelly of America's Sin City. It's an epic battle between a driven cop and the remorseless criminal who would stop at nothing to get what he wanted, including a plot to kill his pursuer and others.

Everyone loves a long, drawn out battle between a detective, and a villain. We had Holmes and Moriarity in fiction, and in Las Vegas, they had Detective Nickell. Told in his own words, this is the story of how he tracked and apprehended the most prolific criminal in Las Vegas history. – David Niall Wilson

~ 1 ~
In Danger
Just as courage is the danger of life, so is fear its safeguard.—Leonardo da Vinci

Early one evening, I left the Detective Bureau and soon noticed the same compact car had been in my mirror for a few blocks. A silver colored Toyota, beat-up looking with no front license plate, driven by two Hispanic-looking men. I wasn't sure if they were following me, but I didn't want to take a chance. My nerves were shot. I'd been dreading this exact thing for weeks.

A quick turn down a side street didn't lose them. Maybe if I stopped, they'd pass, but that would've made me an easy drive-by target and I was outnumbered.

I hastily formed my plan. If they continued to follow, I'd phone for patrol units to pull them over as I led them around aimlessly. A call over the police radio might tip them off, though, if they had a scanner.

I hoped a quick jaunt on the freeway might lose them, but they were still there, just a few cars behind, in the lane to my right. The rush-hour traffic slowed. Something ahead was bringing traffic to a complete stop. If these guys were assassins, this might be their best chance—pull up next to me and unload everything they have. The tactic is used south of the border more often than people in the United States know, and they're usually armed to the teeth.

I was ready. One hand on my pistol in my lap and a pump-action 12-gauge shotgun lying across the seat next to me. The car drew up on my right, and I waited for the smallest of signs. The pistol rested between my legs as I jacked a round into the shotgun's chamber. I could feel my pulse beating in my neck.

The driver rolled his window down and threw out a spent cigarette. His chiseled face, backed with dark, lifeless eyes, reminded me of a shark. I pointed the shotgun directly at him, just out of view below the door frame. Safety off. Finger on the trigger.

Each of the five rounds in the shotgun had nine, .33-caliber projectiles inside, just waiting to tear through the door panel and eliminate the threat.

He had no idea what a bad decision he was about to make. Time seemed to stand still.

Neither the driver nor the passenger had even glanced at me. Traffic started to flow again and the moment was over. I relaxed my grip on the shotgun and holstered my pistol. Before I could reflect, I was on the next freeway exit, contemplating another path home.

My heart raced. I had mixed thoughts: thankful it turned out to be nothing, and disturbed that Daimon had gotten inside my head.

Police work is rarely as you see on TV. Real investigations don't begin and end in an hour. Some take months, or years, to complete. And heart-racing, adrenaline-filled moments are sometimes scarce in the endless days of the work grind. But every now and then, maybe once in a career for some cops, a case comes along that could've been conceived by a Hollywood screenwriter.

Weeks before, Chief Deputy District Attorney Sandy DiGiacomo had called; her tone urgent. "Brad, detectives just told me someone has put a hit out on me."

My heart began to thud heavily. A contract killing is nothing to take lightly, especially for a prosecutor who has made a lot of daunting enemies.

"They asked me where my kids are, and said I might want to get them from school." Her voice shook. "And you'll never guess who the bad guy is."

"No way," I said, knowing exactly what she meant.

Sandy and I had been working an investigation involving Daimon, a thief who had probably committed more crimes than anyone I've ever known. Clearly, things had just taken a turn for the worse.

"You do whatever they say," I said, picturing Daimon. At first blush, he seemed harmless, small in stature, dressed like a rock star from the 80s, walking with a tough swagger to counterbalance his effeminate appearance. But he was a vain and dangerously clever man with dead eyes. I had a sick feeling in my stomach. "I'll see if I can find out more and give you a call."

Daimon had been in jail for months waiting to be tried on several cases, but he still had access to the phone, mail, and a network of friends on the outside. I was the lead detective in his criminal affairs. Sandy was prosecuting him as a habitual criminal, which meant if he were convicted, he potentially faced a life sentence.

As a detective in the Las Vegas Repeat Offender Program, or ROP team, I know a court case against one thief doesn't seem particularly noteworthy. Not until someone realizes the criminal is repeatedly committing crimes, do people start to see the effect one criminal has on a vast amount of innocent people. And Daimon was the most devious, calculating, prolific thief Nevada had ever seen, stealing millions of dollars of material goods, destroying livelihoods, threatening lives, and harming those who stumbled into his path.

Knowing what I did about Daimon, Sandy could be in real danger. I began checking the recorded inmate phones from Daimon's housing unit hoping to find him, or another prisoner, talking about anything that might indicate whether the threat was real or simply jailhouse talk. The inmates know the phones are recorded, and yet many still talk about their criminal activities. Most of them are smart enough to at least use coded language, but some don't bother.

Each phone call lasted around ten minutes and then the line is automatically disconnected. Depending on how many inmates are in a particular housing unit, there can be anywhere from a few dozen to a few hundred phone calls per unit, per day. Sorting through the calls to find a particular inmate's activity was like finding needles in a haystack. And listening to the calls takes time, as you have to remain alert and mentally invested in each conversation or important information can slip by unnoticed.

After hours of searching and listening, one series of phone calls caught my attention.

"Hey, listen," Johnny said. "There's a hit out on a D.A. here, named DiGiacomo. I leaked it to some dummy, and he leaked it downstairs, thinking it was gonna get him somewhere. The guy trying to get this done is Diamond Holt or something like that."

In another phone call, Johnny sounded panicked and began to whisper, so he couldn't be heard by other inmates. "Things have changed since we last spoke, man. He still wants the hit on the D.A., but now he's talking about some detective, and a Judge Leavitt, too."

Johnny sounded like he'd gotten into something he wanted no part of. He didn't want to snitch, but he couldn't sit by and let the hits go down. So he leaked it, knowing the guy would pass the tip to the cops.

Johnny said Daimon was trying to find someone to do the hits for $10,000 each. He also said Daimon might've made a connection with the Aryan Warriors prison gang, and they might've farmed it out to the Sureños gang in Southern California.

This wasn't just jailhouse talk. This was for real.

"He says his number one is this detective named Nickell."

"I'm gonna have somebody come see you," Rich said.

I stopped the tape and replayed it. "His number one is this detective named Nickell." Leaning back in my chair, I clasped my hands behind my head and exhaled. This was a first. As a cop, I've had people threaten me in highly charged, emotional moments, but nobody had ever hatched a real plot to kill me. I was just a cop, doing my job. Daimon was making it personal. I'd worked hard to put the Monroe investigation to rest, but things were far from over.