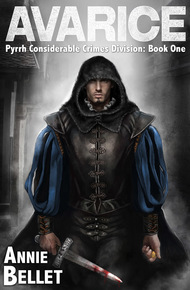 Annie Bellet is the USA Today bestselling author of The Twenty-Sided Sorceress, Pyrrh Considerable Crimes Division, and the Gryphonpike Chronicles series. She holds a BA in English and a BA in Medieval Studies and thus can speak a smattering of useful languages such as Anglo-Saxon and Medieval Welsh.

Her interests besides writing include rock climbing, reading, horse-back riding, video games, comic books, table-top RPGs, and many other nerdy pursuits. She lives in the Netherlands with her husband.

In the Free City of Pyrrh, murders and other serious crimes are investigated by the Cordonates of the Considerable Crimes Division.

Struggling with his grief over losing his last partner, the last thing Cordonate Parshan Koury wants is someone else. Zhivana Nedrogovna, his new partner, is fresh out of the City Watch and not even human, and unsure she wants to work with the broody, angry Par.

As Parshan and Zhivana rush to solve a case of mugging gone wrong that soon proves far more complex, they must learn to trust each other or this first case together might be their last.

Thank heaven for Annie Bellet. I was already familiar with her writing when I picked up her initial entry to this year's bundle, A Heart in Sun and Shadow. When circumstances conspired to remove that story from contention, I was afraid I wouldn't be able to fill the gap. Her prolific NaNoWriMo track record saved the day with another submission, Avarice. This is a delightful story, and one that proves my "Reese's Theorem." If you take two wonderful things and combine them in the right way, they become even more wonderful. Avarice injects a sword and sorcery setting with the elements of a police procedural. It was too brilliant not to include in the bundle. – Joseph R. Lallo

Akil reached the square just as the second bell rang in Kassim's Tower and a light rain started falling. His heart beat fiercely in his chest. Above him a street lamp flickered, its chemicals fading. He slipped a gold coin, one of the heavy suns, from his pouch and forced himself to breathe evenly. One more payment. After tonight, it would be over. His lover, Jala, would be happy and they'd be free to start over.

He looked up at the guttering lamp. It was one of the globes that all alchemical apprentices made far too many of in their first years. The thick glass ball was nearly empty of glowing liquid, only residue staining its sides. He knew the formula by heart. Akil whispered the words to himself, closing his eyes for a moment as he rubbed chilled fingers over the coin in his hand. Phosphor, Moon's Bane, Ember-tail Ant Venom.

The sound of horses' hooves on the stones drew Akil from his nervous reverie. A hackney carriage passed by, the hooded driver hunched in the rain, carrying with him a pool of light from the swinging lanterns. The hack went through the square and turned the corner, heading out of Old Town and toward the University of Science and Alchemy.

Akil's breath misted in the chilly spring air and he pulled the collar of his wool coat up and hunched his shoulders. While he understood the need for a quiet, out-of-the-way meeting for such unsavory business, the middle of the night cloak-and-dagger feel of this particular location and time felt overly dramatic.

The man he was meeting did not have a dramatic flair. Something was off. It couldn't be good. He shifted from one foot to the other and touched his breast pocket. The papers were still there, his ticket to a new life reassuring him.

Footsteps and then movement in the shadows cast by the flickering light as someone walked along the edge of the square, moving past a closed shop front.

"Zer?" Akil called out. Let's get this done, no more games.

Footsteps closer, running, then right behind him.

Something sharp dug into his back and pain exploded in little red dots across his vision. The figure ahead of him stepped into the light.

"But I. . ." Akil started to say but his mouth wouldn't work. Another sharp pain, then another, and Akil felt someone behind him stepping aside even as he collapsed to the ground. Sickening waves washed over him and his body started to shake. A shadow loomed above and he saw a dagger descending toward his chest.

Akil put his arms up but they moved as though the air had become syrup. Fire lanced through his forearms as the dagger slashed his sleeves. The blade bit into his chest and his heart stopped pounding so loudly in his ears.

Still clutched in his fingers, the coin dug into his palm. He had his purpose here. Akil fought to think through the pain as the dagger thrust into his chest again. He felt the warm breath of the man above him but couldn't focus his eyes to see his killer's face. It didn't matter. He knew why he was dying.

Akil shoved his fist into his mouth, his bloody lips closing over the coin. Damn you all to Anunnaki, he thought as the hard metal lodged in the back of his throat. Darkness closed in over him, pain turning to cold, and then the cold turned to nothingness.