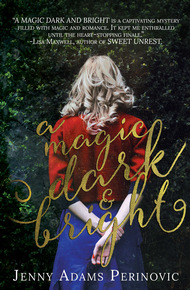 Jenny Adams Perinovic is a YA author, librarian-in-training, and part-time book fairy. She lives in Philadelphia, PA with her perpetual student husband and their tiny menagerie. She likes to write books filled with mystery and magic (and also kissing). On twitter, she's @JennyPerinovic, and you can visit her online at jennyperinovic.com.

She meant to help a ghost...not unleash a curse.

Amelia Dupree hasn't seen the Woman in White since the night her brother died.

The ghost seems to have disappeared from the woods surrounding Asylum, Pennsylvania—that is, until Charlie Blue moves into the creepy old MacAllister House next door. Amelia can't help liking him, even though she spent her childhood thinking his grandmother was a witch. And she definitely can't ignore the connection between his arrival and the Woman in White's return.

Then Amelia learns that the Woman in White is a prisoner, trapped between the worlds of the living and the dead. Devastated by the idea that her brother could be suffering a similar fate, Amelia decides to do whatever it takes to help the Woman in White find peace—and Charlie agrees to help her.

But when Amelia's classmates start to drown in the Susquehanna River, one right after another, rumors swirl as people begin to connect the timing of Charlie's arrival with the unexplained deaths. As Charlie and Amelia uncover the dark history of Asylum, they realize they may have unleashed an unspeakable evil. One they have to stop before everything they love is destroyed.

One of the things I love about the twin genres of sci-fi and fantasy is just how far and wide the borders of those literary kingdoms stretch. Jenny Perinovic's story reminded me that the mythic and mysterious doesn't need the backdrop of a distant extraordinary realm to be captivating. A good ghost story, unraveling the mysteries of a small community in our own world, can be just as enthralling and immersive. A Magic Dark and Bright grabbed me right away with its gothic mood and its skillful blend of romance and horror. – Joseph R. Lallo

A woman haunted the woods behind my house.

I used to watch her from my bedroom window. She glowed silver in the moonlight, a pale wraith in a white dress that curled around her ankles and twisted in an ancient wind that didn't touch the pine trees around her.

My brother, Mark, used to tease me about my interest in her. Some days, he called her my obsession. On others, my overactive imagination. "Watch out, Amelia," he'd say, throwing his hand against his chest, "She'll lure you out into the woods and steal your soul."

But that was before. I hadn't seen her in six months, not since the night she watched Mark die.

I pressed my palm flat against the screen and waited, like I had almost every night since I'd come home from the hospital. Nothing stirred outside; the line of forest along the edge of our yard stood still, black branches stretched toward the sky. Not even a breeze fluttered the gauzy curtains around my windows. The woods were empty.

"Come on," I whispered, like I could summon her with my words. The clock in the hallway chimed, its bells echoing through the silent house. Three in the morning. I sighed and turned from the window–if she hadn't shown up by now, she wouldn't show up at all.

Sometimes, on nights like this, when the corners of my brain went fuzzy from exhaustion, I wondered if she disappeared because of me. If maybe, since that night, I'd wanted to see her too much, that my wanting had scared her away. And then I'd think how absurd that was–scaring away a ghost. Whatever her reasons, she was gone. They were both gone.

I slid out of bed and made my way down the stairs from my attic bedroom, careful to avoid the third step from the bottom that always groaned underfoot. Mark's bedroom sat directly below mine, right across the hall from my mother's. I turned the knob slowly and pushed the door open, its hinges creaking in protest.

I froze, hand still on the knob, and waited for my mom to appear in her doorway. She didn't need to know about my late night habits. I'd told her—and my therapist—that the nightmares had stopped. And they had, technically. As long as I didn't let myself sleep.

I counted to ten. No movement came from behind her door–no rustle of blankets, no shuffle of bare feet across the wooden floor. I let out my breath and pushed the door open the rest of the way.

I kept the lamp switched off and crept across the floor. The silvery-white glow from the full moon gave me enough light to see, and even if it hadn't, I knew my way in the dark. Mark's bedroom hadn't changed since the accident. His laptop was still open on his desk, next to a doodled-in textbook and his unfinished chemistry homework. A purple University of Scranton hoodie was thrown across the bed, one sleeve turned inside-out. His duffel bag, half-packed full of clean clothes, sat on the floor in the middle of the room, like he'd just gone out for the night and he'd return in the morning.

I beelined for the built-in shelf that held Mark's movies. He had hundreds of DVDS, mostly movies I never would have watched before, sports documentaries and slasher flicks and raunchy comedies, but they made me feel close to him. It was too dark to read the titles, but I ran my fingers over the plastic cases and picked one at random. I tucked the case under my arm and turned to go.

Tires crunched on gravel a moment before headlights cut a wide swath of light down the wall, right over Mark's posters of the Philadelphia Eagles and some red-haired model in a tiny white swimsuit. I frowned. Our street was a dead-end; it was rare enough that someone would drive by during the day.

I crossed to the window beside his bed, the one that overlooked the side of the house. Our driveway was dark, but there was a car pulling into Ms. MacAllister's driveway next door. Her porch light switched on at the same moment the driver parked and killed the engine. Ms. MacAllister stepped out onto the wide, wrap-around porch. She ran a hand over her hair and looked up at the window where I stood. I let out a squeak and ran, heart slamming against my ribs, stopping only to close Mark's door behind me.

By the time I reached my bedroom, I'd managed to get myself back under control. The room behind me had been dark, and it wasn't like Ms. MacAllister could have seen me from where she stood. I set the DVD on my bedside table and ran my hands over my face.

Outside, a car door slammed. Voices, one low and deep and one higher, carried across the still night, right through my open window. It would have been so easy to peek outside, to see who was outside, visiting Ms. MacAllister at this hour.

I shouldn't, I told myself, even as I climbed back into bed, right under the window. Don't be a creep, Amelia.

Someone laughed. A very male laugh. My curiosity got the better of me, and I pushed the curtain aside.

A guy, tall and thin, stood next to the car, a bag slung over his shoulder. Ms. MacAllister stood beside him, another bag in her hand. He laughed again and turned toward the car. For whatever reason, I was surprised to see how young he was–maybe only a little bit older than me, with a mop of brown curls and thick, black-framed glasses that glinted in the yellow light.

I stayed there, waiting in the window until the door slammed behind them and the porch light winked out. Exhaustion washed over me, turning my limbs to jelly. I yawned as I reached for the cord for the blinds, and cast one last look out to the woods. Just in case.

And there she was.

She flickered between the trees, her long white dress twisting in a non-existent breeze, her feet hovering over the ground.

I froze, almost afraid to breathe.

And if she was there, then maybe, just maybe…

Any thought I had in my head evaporated as she left the cover of the woods and floated above the grass along the treeline. She stopped, her entire being flickering like a projection of an old-time newsreel, moonlight dancing across pearl-white skin. She raised her arm and pointed. Pointed straight at the MacAllister House.

I clapped my hands to my mouth and the blinds crashed down over the window. By the time I had stopped trembling enough that I could lift them again, she was gone.