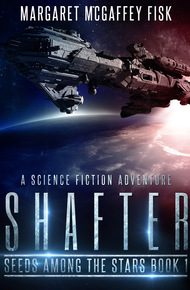 Margaret McGaffey Fisk is a storyteller who explores tales across genres and worlds. Raised in the Foreign Service where she developed a love for anthropology, she has been a data entry clerk, veterinary tech, editor, support engineer, and programmer, among other roles. She pulls on her studies and experiences to give depth to the cultures and people that form the heart of her stories. Her 15 published works fall into science fiction, steampunk, young adult, fantasy, and historical romance. Visit margaretmcgaffeyfisk.com to learn more.

Shafter: Seeds Among the Stars Book 1 by Margaret McGaffey Fisk

Born in the abandoned subway shafts beneath First City, Trina measures life in the coin she steals from her wealthy father's people living above. She gives little weight to her dying mother's fairy tales about how her father will rescue Trina and her twin sister, taking them away from this planet. Yet the stars catch her attention every time she goes to the surface.

Trina is the protector, a role she created more from heroic tales in books her father gave them than anything in a shafter's life. When she sees drunken aristocrats harassing laborers, she can't turn away even though attacking them carries a death sentence. Her paternal grandfather discovers Trina before the enforcers can and offers everything she has ever desired—safety for her family and a way off Ceric.

Can she trust their family connection, or will the price of her dreams be more than Trina is willing to pay?

Shafter, another sci-fi entry to this bundle. Margaret McGaffey Fisk's story tugged at my heart strings something fierce. Futuristic elements like planet-hopping mix smoothly with the ruddy gutter-snipes and beggars more commonly found in medieval fantasy. I quite enjoyed it, and was pleased to find it was the beginning of a larger series. – Joseph R. Lallo

Festival had drawn to a close, that first purse still the best of all her nabs. Despite what she told Katie, her hand seemed less steady, and her eye less focused.

Now, Trina would return to the slow process of choosing a polit house to strike. Fence would be happy to see her business after so long, and she'd find her catches in the quiet of corridors instead of out where she could be seen.

She could have chosen a different route, but went through the square again. Like that last look when leaving the dead for the death cart, she couldn't change her path.

The enforcers wouldn't be looking for her there after all this time. They had little enough to go on and didn't waste resources for so long. This time, the square would be like all others of its kind, the bloodstain washed off by the spray from the fountain and the memory of what occurred dimming into nothing more than a fairy tale to make Katie shiver.

Trina approached the square from a new direction as always, varying her entrance so she wouldn't be marked. From this side, though, she couldn't see the bench.

"Here! See. My blood on the pavement. Whatever came before, a shafter struck me."

Trina almost slipped on the water-slicked cobblestones as she jerked in surprise. Glancing both ways, she found no nearby hiding place. Katie would never forgive the risk.

"So? Your blood's on the stones. With what you've told me, the ladies should have taken your manhood instead."

The second voice stilled her. The man seemed bored despite his words, and yet who would the polit bring if not an enforcer?

Trina slipped closer, using the fountain for what little cover it provided despite the soaking she got as wind played in the water.

"It wasn't like that." Paul's whine made her jaw clench.

She could see the other man now, another polit from his clothes, the badge on his shoulder a match to some clothing she'd taken from a roof laundry line. He heaved a sigh, his broad shoulders shrugging with the force of it while his slightly rounded belly jiggled.

"And just what was it like? I have work to do. If you must walk me through your play, be quick about it," the older man said.

"She came up and threatened me, brandishing a long knife. Easily the length of my forearm."

"This girl held a knife so large? A shafter child? Paul, with the shafters I've seen, such a knife would knock her over." Sun glinted in the man's black hair as he laughed.

Paul paced back and forth from the bench to the dark red stain even Trina could see from her position behind the fountain. If only the wind had changed, water would have washed it away long ago, but wind on Ceric rarely switched direction. Nothing seemed to change here.

"She wasn't that little either. Her head easily came to…"

He put a hand just above his waist, raised it to his shoulder, and finally settled at his ear, a good bit higher than the four and a half feet Trina could claim. A giggle escaped her lips but the fountain covered her small sound. The older man was right. This polit gave them a play as entertaining as any in the shafter halls.

"Hmm. And I suppose she had big arms and a thicker neck? Something like the plowmen among the laborers."

Clearly unaware of the trap, Paul nodded. "Exactly. No small child this. She out-muscled all three of us even if she didn't have throwing knives."

The older polit smiled. "And this amazing specimen of a shafter leapt to the defense of two laborers being harassed by three drunken polit boys too full of themselves." His biting tone even made Trina flinch. "You aren't safe to set on the streets. Go to the enforcers with your tale. You can send them searching the city and even the shafts for this giant of a girl and her swords. Don't forget to warn them she has no compunction about using force against fools. She poses such a threat maybe I'll report her myself."

He strode quickly in Trina's direction, and she backed up, frantic, but all the good hiding spots required she cross into space he could easily observe. Her heart pounded loud enough she thought they would hear it over the fountain.

Trina watched the older polit with almost morbid fascination. She didn't have to think for a knife to slide into her hand. She'd already cut a polit. How could one more make a difference? Her only hope was to avoid capture.

Her body pressed tight against the fountain's wall, as if it could provide some protection. She showed clearly against the yellow marble. The knife pushed against her leg, available, but not visible.

Trina tossed her hair so it masked her face and hid her interest as the man approached, his path barely an arms-length from her. She could be any young child out to play in the fountain. He could just walk by in his disgust at Paul. He had no reason to connect her—

Before she could raise the knife, a strong hand grabbed her just above the wrist and lifted her until only her toes brushed the ground. The fingers pressed into her flesh hard enough to make her grip loosen. Trina watched as her second-best knife fell to the stones, bouncing twice before settling.

"Not quite the amazon but more what I'd have expected."

She twisted against the grip, another knife appearing in her free hand and slashing up to cut herself loose.

"Not so fast, wild one." Her other hand was captured and, before she could lash out with her feet, the man placed her on the lip of the fountain, his arms long enough so his body stayed out of her reach even though her wrists were still trapped. "It seems Paul isn't the only foolish one."

"Let me go! I haven't done anything." Trina scrunched herself up as small as she could and turned wide eyes up at him, using her slender form and lack of height to seem much younger. "Please?"

He seemed stunned for a second then his features hardened. "Paul, come over here."

Trina tried to twist free again, but she failed, her wrists burning with the pressure of his grip though she kept hold of her other knife this time.

All her finesse was wasted. It hadn't kept her from being caught. Katie had been right. What would her sister do now when Trina didn't return? The purse would keep Mother and her sister for a while, but not long enough.

Tears welled up even as the arrogant polit who'd started all of her problems appeared around the end of the fountain. She blinked the moisture from her eyes and glared at him, putting every nasty emotion into her look, as if she could burn his heart out before he condemned her.

Whether from her look or the man's, Paul's steps faltered, and he glanced from one to the other.

Paul cringed under the older man's contemptuous tone, the reaction giving Trina a moment of pleasure.

"Could it be three healthy, well-fed polits ran in terror from this skin-and-bones child? She certainly deserves the coin instead of you. My coin more than any other."

"She's dangerous. I have the scar to prove it." Though his words sounded strong, the whiny tone Paul used grated on Trina.

"Just go. Out of my sight. You can live off your weakling friends until your next allowance is due." The man turned his back on Paul.

Trina met a glare from Paul more vicious than her own. Pure hate poured from his eyes. She shivered, feeling as though his emotion could reach out and strangle her.

Paul nodded stiffly before he twisted on one foot and strode off, his gait somehow awkward and unbalanced. She'd have to watch for that one.

Trina strangled a laugh as she realized her thoughts. It didn't matter how many enemies she made this day. She'd been caught. The penalty for attacking a polit was death, whatever the reason or how seriously this man seemed to take the charge. Her shoulders slumped in defeat, all life and resistance flowing out of her.