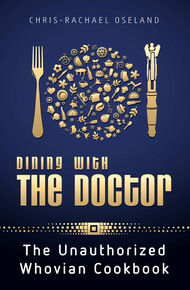 Chris-Rachael Oseland is a freelance writer based in Austin, Texas. By day, she’s the technology and geek life reporter for The Austin Post. By night, she descends into her lair at the base of an extinct volcano, dons her apron and monocle, and subjects her minions to countless culinary experiments. You can enjoy her wibbly wobbly journey through space and time in Dining With The Doctor: The Unauthorized Whovian Cookbook. You can pass the time while waiting for a blue box to materialize in your living room by playing edible versions of Settlers of Catan using her upcoming book, Wood for Sheep: The Unauthorized Settlers Cookbook. (Available Summer 2013). Check out her site, Kitchen Overlord and follow her on Twitter.

Dining With The Doctor by Chris-Rachel Oseland

Your taste buds are about to take a wibbly wobbly, timey wimey adventure through the Doctor Who reboot. Megafan and food writer Chris-Rachael Oseland spent a year rewatching all of series one through six and experimenting in her kitchen to bring you a fresh recipe for every single episode.

This book is a treat for any Whovian who wants to offer more than a plate of fish fingers and a bowl of custard at your next viewing party. Want to host an elegant dinner party to show off your new Tardis corset? Start the evening with a Two Streams Garden Cocktail followed by Baked Hath, Marble Cucumber Circuits with Vesuvian Fire Dipping Sauce, Professor Yana’s Gluten Neutrino Map Binder, Slitheen Eggs, and some of Kazran’s Night Sky Fog Cups for dessert.

This comprehensive cookbook includes eighteen adult beverages, more than two dozen recipes for vegetarians, twenty that are safe for people with wheat allergies, and ten for the low carb dieters. You’ll be prepared for every possible guest.

Put on your fez and straighten your bow tie. You own a cookbook now. Cookbooks are cool.

Oh, look. A new Dalek paradigm. Because Skaro, Dalek Sek, and the pig people weren’t enough. This time, though, the biggest Dalek innovation is that they suddenly come in candy colors!

Don’t worry. You’re not getting an M&M’s themed Dalek recipe. Instead, in the spirit of this episode, we’re using authentic World War II ingredients to make a surprisingly Dalek-tastic sandwich

Churchill may have been a stout man, but everyone serving under him was on strict, austere rations. Luckily for you, this wartime austerity sandwich will fill your belly while also evoking the new Ironsides.

Cut your cherry tomatoes in half and let them sit in a colander to drain. I know you’re thinking of skipping this step, but if you do, the moisture in your tomatoes will exterminate the structural stability of your bread. While the tomatoes drain, mix two tablespoons of mayonnaise with whatever herbs you grow in your victory garden (fresh basil is nice, but you’re also welcome to use one teaspoon of your favorite mixed dried herbs, such as thyme, or dill).

Now slice your bacon in half length-wise so you now have eight very thin slices. Fry up your bacon until it’s nice and crispy. You can’t waste something as precious as cooking fat, so fry up your slices of national loaf (or whatever brown bread you have lying about) in the bacon grease.

Once all your bread is nice and crispy, cut the top, rounded third off two slices. Arrange whole slices directly above them. Between the curved top and the long, tapered body, you can already start to see a Dalek taking shape. Four slices is enough bread for two Dalek sandwiches.

Spread the slices of bread with a thin layer of the mayo mix. Lay one thin slice of bacon horizontally just beneath the top crust of the bread. Beneath that, lay down three slices of bacon in neat rows. Arrange the cherry tomato halves on top of the lower bacon slices so you have a neat grid of shiny Dalek-armor dots. A single round slice of olive makes a good eyeball stalk substitute. You can make some arms from a broken Pocky stick and a snipped cotton swab.

If you’ve used up your entire meat ration for the week or you happen to be a vegetarian time traveler, you can omit the bacon (or substitute Morningstar Farms soy bacon) and just toast the bread.

Once you have Dalek shaped sandwiches, arrange the lettuce leaves like a garnish.

If you don’t want to eat these open faced, simply stack an extra slice of toast underneath each of the Dalek’s body segments. When someone dissects the Dalek to callously eat the body, they can simply toss the lettuce on top of the tomatoes, flip the extra slice of bread on top, and chow down on what would’ve been a hearty and decadent sandwich during WWII.

These Dalek Ironside sandwiches are best served with tea, jammy dodgers, and a threat of extermination.