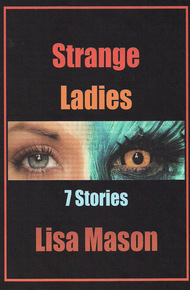 As I mulled over my published short fiction, I found seven wildly different stories with one thing in common—diverse heroines totally unlike me. I'm the girl next door. I have no idea where these Strange Ladies came from.

In The Oniomancer (Asimov's Science Fiction Magazine), a Chinese-American punk bicycle messenger finds an artifact on the street. In Guardian (Asimov's Science Fiction Magazine), an African-American gallerist resorts to voodoo to confront a criminal. In Felicitas (Desire Burn: Women Writing from the Dark Side of Passion [Carroll and Graf]), a Mexican immigrant faces life as a cat shapeshifter. In Stripper (Unique Magazine), an exotic dancer battles the Mob. In Triad (Universe 2 [Bantam]), Dana Anad lives half the time as a woman, half as a man, and falls in love with a very strange lady. In Destination (Magazine of Fantasy and Science Fiction), a driver takes three strangers from a ride board on a cross-country trip as the radio reports that a serial killer is on the loose. In Transformation and the Postmodern Identity Crisis (Fantastic Alice [Ace]), Alice considers life after Wonderland.

People in publishing today—editors and agents—are calling for diversity in science fiction and fantasy. Yet science fiction and fantasy writers, especially women writers, have been writing diverse stories for two or three decades! That includes me, and this collection is proof. As I mulled over my published short fiction, I found seven wildly different stories with one thing in common—diverse heroines totally unlike me. I'm the girl next door from Ohio. I have no idea where these Strange Ladies came from. Enjoy their stories and their worlds in The Story Collection StoryBundle. – Lisa Mason

Sal is running low on gas, cash, and inner peace ninety miles west of Provo, so on a whim she swings off the freeway and guns it through Boulder, aiming to pick up riders as soon as day breaks. Now Sal, Frankie'd say, if I told you once, honey, I told you a thousand times. Just 'cause you get a whim don't mean you got to go do it.

But Frankie ain't here to honey this and honey that and the radio has been railing all night about the trail of blood from Los Angeles to New York and back again. Sal herself is eastbound from L.A. Small chance she'd run into the Slash 'N' Basher, who they think is heading west.

But between eastbound and west, there's just a thin white line and the speed in her wheels. Deep night before dawn, the scrub plains of Nevada, mountains stark as a moonscape, make her lonely and a little bit scared.

Dawn stabs her eyes as she finds her way to the college in Boulder, a collection of retro-futuristic towers that look like the set of a Woody Allen movie from the Sixties. In fact, the campus was a set of that silly movie, or so Sal has it on good authority.

What a grin! Her journey is touched—yet again—by the magic of movies.

In the slightly shabby student union, she finds a ride board. A serious expanse of cork thumb-tacked with printouts and hand-lettered signs, everything fringed with phone numbers, fax numbers, email addresses.

Her 1978 sea-green Olds Delta Royale Eighty-eight is a big old boat from a used car lot. She could take five skinny Goths, a married couple with a kid, or four freshmen with a week's change of clothes.

Sal is no mood for complications. She decides three eastbound one-ways, with two hundred bucks each for gas and a backpack to stow, will do the trick. She tears off a handful of fringe, heads down the hall to the old-fashioned phone booth. She dials up a bunch of old-fashioned phone numbers.

Three sleepy voices answer on the first try. Is this luck? She tells each of them to pack it up, bring coin of the realm, and get on over to the student union. She's heading out on the highway at eight A.M. sharp, come hell or nuclear winter.

So that's that. She wanders over to a franchise café in the student union, orders coffee, stirs in three packets of pure cane sugar and a splash of curdled cream from an aluminum pitcher on the counter. Caffeine, sugar, fat—a bit of protein if you count the flies dive-bombing the cream. She needs nourishment after another grueling all-nighter.

The first rider is a tough old guy, shorter than Sal. She can tell right away that doesn't sit well with him. That a punk-ass slip of a girl has got two inches on him, not counting the heels of her cowboy boots. Curse his mama, curse her mama before her, curse all mamas for breeding gnarly runts like him. That's what he's thinking.

But he politely removes his Stetson to introduce himself, and she gets a good glimpse of his boar-bristle butch, wind-scoured skin, whittled cheeks of the poor who eat lean 'cause they've got to. Beneath the unbuttoned collar of his shirt, Sal sees the bridge of a spaceship silk-screened on his T-shirt.

"Call me Wingy," he says, picking tobacco-stained teeth with a sooty fingernail. Only then does she notice the stump just below his right elbow where the rest of his arm ought to be, the sleeve of his flannel shirt pinned up.

"Them oil rigs off Loozeeanna," Wingy says, catching her glance, "they a bitch."

He dares her to look away.

The second rider hitches up cheap leather jeans beneath his ample gnome belly, along with a boar's-head brass belt buckle. He goes goat-bearded, sunglassed courtesy of Taiwan, compulsively finger-combing spider-webby brown hair hanging longer down his back than Sal's. Paisley scarves braided with suede thongs bind his forehead, wrists, and knees. Other little odd things dangle off him here and there: a silver-tone skull and crossbones, black plastic spiders, tiny brass Tibetan bells. Pinned across his chest are buttons that say Eat Me and Crack Heads Today or exhibit miniature pictures, including the face of the Queen of England and a spaceship poised above a red planet.

The toes curling out of his Birkenstocks are cleaner than Wingy's fingernails, but the ice in his eyes and the sneer on his lips hint he hasn't worked an honest day in decades. "Folks call me Jive," he says, "and so can you.'

Three's lucky, they say, and the third, thank the Lord, is a dead-ringer for Prince Charming. Six two, if he's an inch, and solid as a rock. Blond locks kiss his suntanned forehead, nibble at his noble neck. Some say ordinary faces with perfect symmetry are the most beautiful. If that's true, Sal's got to hand this boy the prize. He's got eyes as true-blue as the Colorado sky, a ski slope of a nose, a mouth that ought to know how to eat a peach.

Sal can't help but smile, but he doesn't return the courtesy. His baby blues dart down, dart away. A shy one, she sighs.

He pulls off his lambskin bomber jacket. Beneath the jacket, he wears a crisp white shirt and new jeans. He slings an orange nylon backpack over his shoulder, carries a paperback book, the cover an airbrushed illustration of a spaceship warping through galaxies.

"You can put the backpack in the trunk," he says.

When they walk out to the Olds in the parking lot, she does.

But his snooty manner rubs her the wrong way. Maybe the others look low-class to him, Sal thinks, popping open the trunk, dropping his backpack in. Make him nervous, nice kid like this. Maybe she looks like that to him. Low-class and crusty, her boots needing a shine.

Well, lah-dee-dah. Two straight days on the road will muss the hair of the Queen of England. Don't even think about her fingernails. Now Sal, Frankie'd say, take it easy, honey, don't get your blood boiling over no damn thing.

She doesn't take it easy. Two straight days on the road have turned her nerves into frayed wire, sparking with indignation. She whirls around. If you're too good for us, pal, she starts to say, shove off.

But the boys, they are shooting the breeze. Oh, they are having themselves a time.

"And how about you, buddy?" Wingy is saying, clapping Prince Charming on the shoulder. "What's your handle?"

"It's the eyes," he says. Dang, if he doesn't blush, a fine pink misting his perfect cheekbones.

"Don't tell me. Blue?" Jive says with a grin that does little to recommend his dentist.

Babe grins as if he's just been handed the Medal of Honor. Glances at Sal, sweet and furtive. Her knees go weak. Babe.

"Listen up, guys," she says, slamming the trunk. "Frankie needs me in Detroit in three days. So we're gonna do nonstop. No drugs, no drinking, no funny stuff. We share the wheel, the gas, and that's about it. You got it?"

They get it. They pile in. The first stakes out an armrest, the second some leg room, the third cranks down a window in the back.

If any of them has got a secret to hide, he doesn't let on.