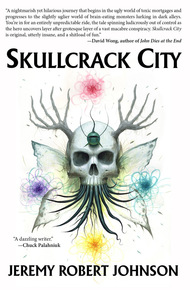 Jeremy Robert Johnson is the author of the Wonderland Book Award-winning WE LIVE INSIDE YOU, the cult hit ANGEL DUST APOCALYPSE, the Stoker-nominated novel SIREN PROMISED (w/Alan M. Clark), and the end-of-the-world freak-out EXTINCTION JOURNALS. His fiction has been acclaimed by authors like Jack Ketchum and Chuck Palahniuk and has appeared internationally in numerous anthologies and magazines. In 2008 he worked with The Mars Volta to tell the story behind their Grammy-winning album The Bedlam in Goliath. In 2010 he spoke about weirdness and metaphor as a survival tool at the Fractal 10 conference in Medellin, Colombia (where fellow speakers included DJ Spooky, an MIT bio-engineer, and a doctor who explained the neurological aspirations of a sponge). He is working on a number of new books. You'll just have to trust him on this.

You weren't always an agent of the apocalypse. You used to be a banker. Who knew that too much coffee and a few bad decisions would lead to the end of the world?

Life as a corporate drone was killing S.P. Doyle, so he decided to bring down the whole corrupt system from the inside. But after discovering something monstrous in the bank's files, he was framed for murder and trapped inside a conspiracy beyond reason.

Now Doyle's doing his best to survive against a nightmare cabal of crooked conglomerates, DNA-doped mutants, drug-addled freak show celebs, experimental surgeons, depraved doomsday cults, and the ultra-bad mojo of a full-blown Hexadrine habit. Joined by his pet turtle Deckard, and Dara, a beautiful missionary with a murderous past, Doyle must find a way to save humankind and fight the terrible truth at the heart of...

No one chooses to become a banker. It just happens, like cancer, and then you try to live with it for as long as you can.

After thirteen years in the industry, I was damn near terminal. With each step up the corporate ladder I received a slightly smaller laptop, a slightly-harder-to-adjust office chair. To compensate they offered free donuts and coffee cards. Weekends off. 401K vesting. Medical insurance that I had to have because they were turning me into a half-blind hunchback with diabetes.

The illusion of safety and security kept me hooked, but every two or three years the veil would be pulled aside and some egregious fraud or pyramid scheme would nearly topple the bank. Then, after a series of Fire-Day Friday culling events, our stock would get low enough to bait some bigger finance fish to swallow us whole.

It felt good to survive those Fridays, but—just in case it was your turn on the chopping block that week—you kept your photos and desk plants in a cardboard box so you could easily escape the cubicle village before you started to shake from the shock of termination.

I never understood the folks who sat outside the bank and cried on the curb. To me, that was like a cow lowing and brushing against the steel doors of a slaughterhouse from which it had been released.

I collected promotional mugs for all eight of the banks which collapsed beneath me. I lined them up in each new cubicle like heads on poles outside of a cannibal village. My resume was a graveyard of once powerful institutions. I felt like a jungle vet and had the ugly stories to go with the vibe.

If you're a young man and they put you in a tie and a cheap dress shirt and some khakis and tell you you're doing a great job, you might buy the propaganda. You might have to, so any of it can matter. So you can survive Fire-Day Friday.

They told me I was a man on the move. An asset to the corporation. I believed them.

I foreclosed on a family farm even after the eighty-year-old matriarch brought me a bag of free cucumbers and begged me not to take what had been in her family for generations.

I shredded files which showed our northernmost office had been issuing racially-based loan denials for years. They'd even created an inter-office spreadsheet to track and remove the applications. Rest assured we deleted any knowledge of "nowaynigger.xls" to the depth of our hard drives. I heard they sent Dale Pritchard to the actual branch to destroy their systems with thermite.

I filed customer letters promising suicide—"You have given me no other choices."—in our newest batch of collapsing mortgage portfolios. After a while these notes got backed up and we had a Sunday pizza party to file them down.

I forgot to mention all the free pizza.

I should have known better.

After all that time, all that casual corruption and money-mongering on display, I should have been wise enough to re-fuse their last offer: a position as Primary Compliance Officer.

They wanted me to preach civility to a pack of wolverines. Sure, they were upright and drove whatever the newest BMW was, but still…fucking wolverines.

I'd been a steadfast grunt for so long they had me pegged as a Company Man. "Think you can keep these cowboys in order, Doyle?" And then they winked. They winked. Like Santa Claus in Just Our Secret mode.

The role and its implications were clear. Keep the files clean for the Feds. Give our bank the appearance of utmost propriety. And never, ever get in the way of our money.

I used to believe there was a part of the human brain we couldn't quite excise, and its sole purpose was to encourage self-destruction. Someday, I thought, the guys working on the BRAIN Initiative would push aside a contour in the gray matter and find a pulsing, jet-black spot. They'd insert a probe into the patient's head to press the nodule and the patient's immediate response would be to shout out, "FUCK IT! WHY NOT?"

It's this spot which I blamed for my entry into the banking field in the first place.

She asked me to move in with her six days after we'd met.

She said, "You don't make enough money at the newsstand. You should quit and get a job at that bank across the street. They have money."

And then it's thirteen years later, twelve since that girl put a knife through the thumb/forefinger junction-meat of my left hand during a one-sided break-up, and there's a smiling wolverine in a dark blue suit asking me if I can keep the cow-boys in order.

And that same part of my brain, that inky tumor of bad impulse that had led me on Hexadrine blowouts and bottle-draining binges, threw me a flash image of the weeping grandmother whose farm I'd taken on behalf of these bastards. I pictured her bag of cucumbers and how we'd just left it to rot on our lunchroom table. And I swear I thought, with great earnestness, "I'm going to clean up this bank. And if I can't, I'm going to take it down from the inside."