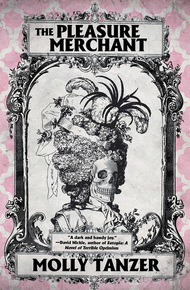 The Pleasure Merchant by Molly Tanzer

"Forgive me, but I'm having some difficulty ascertaining exactly where magnetic north lies on your moral compass."

Apprentice wig-maker Tom Dawne's dream is to complete his training, marry his master's daughter, and set up a shop of his own. Unfortunately for him, when one of his greatest creations is used to play a cruel prank on a powerful gentleman, Tom is dismissed-and forced by fear of poverty and the need to clear his name to serve the very man whom he suspects set him up.

Tom quickly realizes he has bitten off more than he can chew... though as it turns out, it's not actually more than he desires. As Tom becomes less of a servant and more of a surrogate son, his ambitions change, and so do his pleasures, until it's no longer easy for Tom to tell if he's pulling the strings... or trapped in a bizarre web of someone else's making. Matters become no clearer when Tom meets the mysterious professional libertines who seem to lurk at the center of all his troubles: a man willing to procure anything for anyone, so long as it gives them pleasure, and his obscure assistant, whose past has been irretrievably lost.

I have a story to tell you.

It is not a love story, but there is love in it. True love, even.

Neither is it a revenge tale, though it contains plenty of that, too.

It is a story about pleasure.

Everyone thinks something different when they think of pleasure.

Most people immediately consider the carnal—'pleasures of the flesh.' They imagine bodies pressed against bodies, wriggling or pumping, diddling or caressing, moaning and releasing. Shuddering, trembling encounters, be they sweet or savage, between two lovers in the secret darkness of a boudoir, or shared among many, before onlookers, in a brilliant ballroom, a shadowed schoolroom, a candlelit church… or some place yet more scandalous.

Others, when they think of pleasure contemplate a table, laden—no, groaning under the weight of every delicacy. Fruits from all seasons, meats from every creature, spices from the East or from the Indies, sugared treats, piping hot teas from Formosa, coffee from the Americas, the tenderest vegetables, the rarest cheeses; the flakiest pastries and the richest gravies.

Some think of revenge. It is a dark pleasure, yes, but a pleasure nonetheless. That most loathed of rivals—how hated are her success; how despised, his triumphs! What many would give to see someone brought low before all and sundry, kneeling, red-faced and humiliated, tears running down a running nose, furious but sorrowful, embarrassed but impotent…

Others still think of freedom. Freedom to, sometimes; other times, freedom from.

If there is one thing I know well—intimately, even—it is pleasure. It is my trade, as it has been since I was very young indeed. I have made a fortune selling people their pleasure, as my master promised I would—it is how he made his fortune, and his mistress, too. There is money to be made in pleasure, something any courtesan, chef, or crook knows quite well—money to be made in the procurement or someone's pleasure, and money to be made in keeping the secret of what that person's pleasure turns out to be.

When one deals in pleasure, one must also deal in the reverse. In pain, in sorrow; in anguish, misery, and despair. I confess I know all of those sensations intimately, as well.

You only truly know a man when you know his pleasure.

That is what my master told me when I decided to become his apprentice, and my extensive experience has proven this statement true. When you know a man's pleasure, you hold him in the palm of your hand. You know his truest self—his darkest secret and his brightest dream. You have a power over him… which is why my master and I enjoyed safety and security, along with our wealth.

Violate our contract at your peril. Never ours.

But even truer is something my master never said, which accounts for its lack of pithiness (I have exceeded him in various ways, but never in producing bons mots):

Ah, but I promised you a story, not pages of rambling, oblique speculation. It is just, now that I have resolved to write down this story, I don't quite know where to begin. I have kept so many secrets for so long—lived a secret life for so many years. It is overwhelming to sit here, putting quill to parchment, to tell, well… any of it.

There is no way to do this without betraying many people, all of whom trusted me. But my master, the only person whom I can say with certainty I have never betrayed, is dead. No harm can come to him. And anyone who recognizes themselves in these pages would do worse damage to their reputation by protesting their depiction—to come forward would only serve to confirm any suspicions that might potentially be aroused.

And yet, I possess such a volume of information about the entire affair that I know not how I shall organize it all into a compelling narrative. Life is not a story. It must be shaped for the page—which is why, in the end, this effort of mine will likely be accused of beggaring belief, possessing as it does similar motifs to popular novels of the day.

But my story, unlike said novels, has the benefit of being true.

Having said all this, it is time to begin in earnest. And I shall begin… in a wig shop.