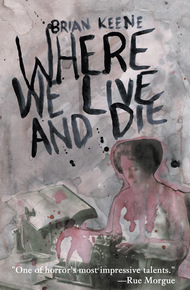 BRIAN KEENE writes novels, comic books, short fiction, and occasional journalism for money. He is the author of over forty books, mostly in the horror, crime, and dark fantasy genres. Keene's novels have been translated into German, Spanish, Polish, Italian, French, Taiwanese, and many more. In addition to his own original work, Keene has written for media properties such as Doctor Who, Hellboy, Masters of the Universe, and Superman.

Several of Keene's novels have been developed for film, including Ghoul, The Ties That Bind, and Fast Zombies Suck. Several more are in-development or under option. Keene also serves as Executive Producer for the independent film studio Drunken Tentacle Productions. Keene also oversees Maelstrom, his own small press publishing imprint spe-cializing in collectible limited editions, via Thunderstorm Books.

Keene's work has been praised in such diverse places as The New York Times, The History Channel, The Howard Stern Show, CNN.com, Publishers Weekly, Media Bistro, Fangoria Magazine, and Rue Morgue. He has won numerous awards and honors, including two Bram Stoker Awards, and a recognition from Whiteman A.F.B. (home of the B-2 Stealth Bomber) for his outreach to U.S. troops serving both overseas and abroad. A prolific public speaker, Keene has delivered talks at conventions, college campuses, theaters, and inside Central Intelligence Agency headquarters in Langley, VA.

The father of two sons, Keene lives in rural Pennsylvania.

Where We Live and Die by Brian Keene

The muses are monsters. With them, we live and die.

Since his earliest stories, Brian Keene has deconstructed the mystique of the writing life. Isolation, relationships lost, long hours, inconsistent paychecks, and professional heartbreak are all part of the job. Keene has unflinchingly laid bare the realities of the full-time writer. Where We Live and Diecollects Brian Keene's best stories about the writing life, including his metafictional ghost story masterpiece "The Girl on the Glider," a glimpse of Adam Senft (from Keene's Dark Hollow and Ghost Walk) in Hell, and a never-before-printed spoken word poem encapsulating the history of the horror genre.Where We Live and Die is a masterful collection by a Grandmaster of Horror and a fictional guidebook for the working writer.

I dreamed about her again last night—the girl on the glider. Apparently, I was kicking and thrashing so hard in my sleep that I woke up my wife. She wasn't very happy about it, either. The baby has been getting up between 4am and 5am every morning, and Cassi didn't appreciate me waking her a few hours before that.

This morning, while we were giving the baby his breakfast, Cassi asked me if I remembered what I was dreaming about. I lied and told her that I didn't.

Anyway, it's clear that this shit isn't going away on its own. If anything, it's getting worse. I'm not one-hundred percent positive that I know who the girl is, or why she's hanging out on our porch glider, or why I'm dreaming about her, but I have some ideas. The only problem is that my ideas all point to one solution. One answer.

And the answer is that I'm losing my fucking mind.

That scares me. That scares me in ways I can't even put into words (which is frustrating for a writer). I mean, at forty-one—or am I forty-two? I can't remember. Isn't it funny how you stop keeping track of that shit after a certain age? Let's see. Dad came back from Vietnam in 1967 and I came along nine months later, so that makes me…forty-one. I think. Math was never my strong suit. Let's say, for the sake of argument, that I'm forty-one, which sucks, but doesn't suck nearly as bad as being forty-two.

But I digress, new diary. As I was saying, at forty-one, I've thought about my own mortality a little bit. I don't like to, but I really don't have any choice, do I? After my Dad's cancer battle and the fact that I'm a father again—it makes a guy think long and hard about things. I've led a pretty hardcore lifestyle. That shit takes a toll on you after a while. Sooner or later, it catches up with you.

In truth, I always figured it would be my past that killed me—the booze or the tobacco or the era of loose sex all seemed to be likely candidates. Or maybe a slick road combined with a high rate of speed and some heavy metal blasting from the speakers. Or maybe I'd go out like Dick Laymon and my Grandma Lena did—a quick and sudden heart attack. Or maybe I'd get gunned down at a book signing by some crazed fan. "Here ya go, zombie guy! Let's see you come back from the dead!"

None of those would be pleasant. Especially cancer. I'm scared to fucking death of cancer. I can't think of anything more horrifying than dying of cancer. I'd rather drown or burn to death than die of cancer. But losing my mind terrifies me even more than cancer does, because if I lost my mind, I wouldn't be able to write anymore. Losing my voice wouldn't impact my writing. Neither would losing my legs or my sight or my hearing. Even if I lost my hands, I'd still be able to write. There's voice recognition software and other methods I could use. The only part of my body I couldn't write without is my brain, and apparently, my brain has decided to declare war on me.

That's why I've started writing this manuscript. Diary. Whatever the fuck it is. I'm writing it to help me work out this shit on my own. I mean, let's be realistic. It's not like I can Blog about it. They make fun of Whitley Strieber for saying he was abducted by grey aliens possessed with a disturbing fascination for his bunghole. Imagine what they'd do to me if I said in public that I was being haunted by a teenaged girl who likes to hang out on my porch and send text messages on her cell phone and talk to my nineteen-month-old son and occasionally scare the shit out of my dog—even if she's not probing my ass the way Whitley's aliens do.

I can't talk about it online, and I can't tell my friends about it, either. It's hard times right now, especially for writers. Tough financial straits. You'd think that people would buy more books during a recession, but apparently, it's quite the opposite. J. F. (Jesus) Gonzalez and Tim Lebbon and Tom Piccirilli and Jim Moore and everybody else I know are in the same financial situation that I'm in, and I don't foresee the President or Congress giving us a corporate bailout anytime soon. My peers have problems of their own. They've got enough on their minds. They don't need one of their best writer-friends confiding in them that he might very well be going crazy. And if I told my inner circle—John Urbancik, Geoff "Coop" Cooper, Mike Oliveri and Michael "Mikey" Huyck—I'm pretty sure they would try to set up some kind of intervention for me, and who needs that shit, right? I'm still pissed about the last time they tried to do that to me.

I could tell Cassi, I guess. I mean, she's my wife. I'm supposed to tell her everything, but for some reason, I haven't told her about this. To be honest, I think she already suspects. She's commented a few times over the last couple of weeks that I seem out of it. And she's right. I am a bit out of it. But I can't tell her everything yet, because I don't want to scare her. If I start crying or something—if I break down—it will really frighten her, and right now, with everything else that's going on, I have to be the strong one. For her. The baby. Our friends and families. All of us.

So I'm telling you.

Dear new manuscript that I'm typing on my laptop:

My name is Brian Keene and I am either losing my mind or I am being haunted.