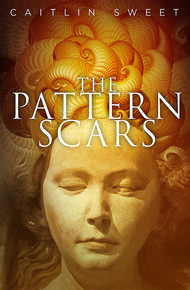 Caitlin Sweet's first fantasy novel, A Telling of Stars, was published by Penguin Canada in 2003. Her second, The Silences of Home, was published in 2005. Her one and only short story, "To Play the Game of Men," was included in Daw's Ages of Wonder anthology in 2009. Her novel The Pattern Scars, came out from CZP in 2011, and was nominated for Sunburst and Aurora awards, and reviewed to much acclaim in the Huffington Post. She released a YA title in 2014 with CZP called The Door in the Mountain, which won the 2015 Copper Cylinder Award. The sequel, The Flame in the Maze, came out in 2015.

Nola is born into poverty in Sarsenay City. When her mother realizes that Nola has the gift of Othersight and can foretell the future, she sells her to a brothel seer, who teaches the girl to harness her gift. As she grows up, she embraces her new life, and even finds a small circle of friends. All too soon, her world is again turned upside down when one of them is murdered. When a handsome, young Otherseer from the castle promises to teach her, she eagerly embraces the prospects of luxury beyond what she can imagine and safety from a killer who stalks girls by night. Little does she know that he will soon draw her into a web of murder, treachery, and obsessive desire that will threaten the people and land she holds dear, and that she will soon learn the harshest of lessons: that being able to predict the future has nothing to do with being able to prevent it.

We all have different things we look for in our favourite books. For me, it's fully developed characters that I can care about and prose that pulls you in and doesn't let you go. Caitlin Sweet's writing provides both, so when I was making up this bundle, I leapt at the chance to include one of Caitlin's books. Not only an Aurora Finalist for best novel in 2012, The Pattern Scars also won the CBC Bookies Award in 2012 for Speculative Fiction. – Douglas Smith

A tale was always told, in the lower city and in the castle (and I know, because I've lived in both places): When Teldaru, who was later seer to King Haldrin, was a boy of five, a powerful and much-hated lord ordered him to fetch a flagon of wine. The boy did the lord's bidding, for he had no choice, being a child, and the son of the tavern keeper, and of no account. The lord was already drunk, but he swallowed most of the wine in a few gulps. He set the flagon down unsteadily and it tottered and fell. "Wretch!" he cried at Teldaru, who was still standing there by the table. "You've brought me a faulty cup. And now look—such a mess—only a seer could make sense of it. . . ." The man narrowed his eyes at the dark spatter upon the wood, then shifted them back to the boy. "Make right your clumsiness," he slurred. "Entertain me. Read my future in this pattern and I will withhold the order to have you flogged."

Teldaru stood up on his tiptoes and peered across the tabletop. He frowned. "I see a breaking wave," he declared in his high, clear voice as the others around the table and in the room fell silent, "with you standing beneath it. Your face is still and purple." It is said that the midday sun, which had been spilling into the tavern, dimmed, and an owl hooted, as if it believed night had fallen. Some claim that stars shone, in the sudden dimness, and that one even fell, to signal a prophecy confirmed.

The lord gaped at the child as the darkness made way again for daylight. After a moment he rose, knocking over his stool, and all his men rose too, their mail shirts hissing and their scabbards clattering against benches. "Kill him," he said, waving a hand at Teldaru, but no one moved to obey him. He stumbled backwards and fell down unconscious. Three days later he drowned in his mistress's bath. Two days after that, the king (Haldrin's father, then) installed Teldaru by the Otherseers' pool in the castle wood.

"And how did it happen first for you?" people would ask me, thinking of the boy and the lord and the wine. I heard this question in the brothel where I spent my girlhood, and by the seers' pool where I left my girlhood behind. For a long time I answered this way: When I was eight, I came upon a woman weeping beside the fountain where I liked to soak my feet on the hottest summer days. She grasped my hands and cried, "He has left and gone—and oh, what will become of me? Tell me; tell me, child, for my own eyes are closed. . . ." As she spoke, my gaze strayed to the water, which was spraying in fat droplets from the fountain's white stone mouth. And I saw her likeness in the air—only she was laughing, holding a baby above her so that it laughed too. Such an image: golden but made of all the other colours; thin and faceted as a dragonfly's wing.

"There will be a child," I told her, and the vision rippled and fell like the water. "You will laugh together." The words were like the vision itself: heavy and light at once. There was a humming in my head.

She embraced me (her tears made a warm trail across my neck) and said, "Such a hopeful thing you've seen," as if she didn't quite believe me but wanted to be kind. A year later I saw her again by the fountain, holding a red-headed babe on her hip—and she embraced me again and gave me my first silver coin.

This was what I said to the people who asked about my first vision. A less grand tale than Teldaru's, but the gold of it shimmered every time I told it, and the red-haired baby made me smile. And it had happened—just not first, as I claimed. So I suppose I was a liar even before the curse.

The true answer to the question was: My mother was crying again. The newest baby was crying. "He's left," my mother sobbed, "he's gone." The same words over and over, as she chopped a potato on the scarred, stained table. "He's left—he's gone" until the potato was a collection of slivers peeling away from the knife. "Quiet!" This word was a scream. Her head was turned to the kicking, red-faced baby. The knife slipped. She made another noise, like the grunt of an animal. Blood pulsed over the table and onto the ancient, yellowed rushes on the floor. She stared, then raised her head to me and whispered, "Nola." Her eyes were wide. "Nola." I could not move from my little stool by the door. "Help me. Tell me what will become of me, for my own eyes are closed."

I was gazing at the pattern of blood and potato peelings as I heard her words. After a moment I saw a darkness seeping up around her legs, and up around the baby's cradle, and over the pallets where the other children huddled.

The darkness thickened until no one was there at all. When it began to ebb I thought I might remember to breathe again, but I couldn't, because there was still emptiness where everyone had been. The room was the same as ever, but also vast, and there was a feeling in my chest that was new, like a weight of stones.

I was lying on the floor. My mother's face swam above me. She was holding her hand in the air, and I noticed from a faraway place that it was already wrapped in a piece of cloth, blood-soaked now but likely filthy even before. The baby's wails sounded louder than they had. "Child." Her eyes were sharp and narrow, now. "Did you see something? Tell me"—and I did somehow, in a voice that didn't sound like mine at all.

She took me to the brothel the next day, and sold me to the old seer there for a bag of copper pieces. I never saw her or my siblings again.

So I'd ask anyone: Which answer satisfies more? Gold-drenched water and a chortling baby, or darkness, and stones instead of breath? I knew as soon as that first person asked me the question. For several years I replied falsely, but by choice. My listeners believed me, also because they chose to. There was no curse, for those first few years; just innocence, and a gift I hoped might someday bring me joy.