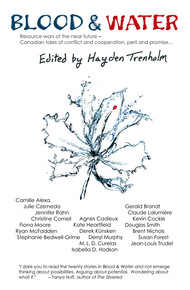 Hayden Trenholm is an award-winning playwright, novelist and short story writer. His short fiction has appeared in many magazines and anthologies and on CBC radio. His first novel, A Circle of Birds, won the 3-Day Novel Writing competition in 1993; it was recently translated and published in French. His trilogy, The Steele Chronicles (Defining Diana, Steel Whispers and Stealing Home), were each nominated for an Aurora Award. Stealing Home, the third book, was a finalist for the Sunburst Award. Hayden has won four Aurora Awards – twice for short fiction and twice for editing anthologies. He purchased Bundoran Press in 2012 and is its managing editor. He lives in Ottawa with his wife and fellow writer, Elizabeth Westbrook-Trenholm.

Conflicts over resources are as old as human history.

Climate change, along with continued population expansion and changes to the world economic order, adds a significant new factor to the equation. We can live without diamonds and gold, we can even find alternatives to oil, but water, food, land, and air are irreplaceable.

Blood & Water presents an impressive collection of writers representing every region of the country whose stories are set from coast to coast to coast.

Mostly science fiction, with a sprinkling of the fantastic, Blood and Water presents a bleak future – but also offers hope and even joy.

Perhaps that is the 'uniquely Canadian perspective'- every conflict has a resolution, every problem has an answer.

Most Canadian SF&F authors got their start writing and selling short fiction. When I put this bundle together, I wanted to include at least one anthology to demonstrate the wealth and breadth of Canadian short speculative fiction. The Aurora-winning Blood and Water fills that bill perfectly. Like other authors on this list, I've known Hayden almost since I started writing in the late 90's. He's been an Aurora finalist ever so many times himself and has won the award three times, twice for short fiction and once as an editor, for the anthology included here. Hayden also owns Bundoran Press, so he knows the writing game from all sides: writer, editor, and publisher. Blood and Water also includes my Aurora winning novelette, "Spirit Dance," as well as stories from several multi-award-winning authors. – Douglas Smith

Blood and Water: An Introduction

Imagine standing at the mouth of the Colorado River where it enters the Gulf of California, just across the US-Mexico border. Instead of a rushing river, you see a trickling stream. Science Fiction? Not at all. Like many major rivers in America, the waters from the Colorado are fully allocated – for agriculture, industry, recreation and human consumption – taken up and used long before the river reaches its ocean outlet.

The Colorado, feeding the dry south-western states, is particularly dramatic in this regard. In fact, more water is allocated than the basin produces most years – especially in the last decade – and only careful management of interstate agreements and international treaties have kept all users satisfied. But, as we all know, you can't change the laws of physics. Travel to Lake Mead, one of the artificial lakes created by dams on the Colorado, and you can see for yourself what warmer, dryer weather has wrought. Water levels rise and fall with the seasons and from year-to-year, but the general trend for the last fifty years has been down. You only need to stand on one of the old piers, now extending into open air, and look down on the lake far below, to take the measure of that trend.

Artificial lakes aren't the only ones affected by human demands and changing climates. The Great Lakes, collectively the largest body of fresh water in the world, are at record low levels, as well. Meanwhile, glaciers in the Rocky Mountains that feed the hungry taps of California and supply water throughout the west are shrinking. Those in Jasper National Park, west of Edmonton, used to extend down to the highway; now, it's a fair hike across glacial till to reach their lowest extent.

Fights over water have seldom erupted in a shooting war in North America, but it came close on the Alberta-Montana border as far back as 1909 and occasional violence over water between neighbours in Texas (where water rights go to those who can grab them) are not unknown. But the world has already seen at least one war – that in Darfur – where water and who gets to use it was a major aspect of the conflict. Even as I write this introduction, there are threats of military conflict over water in the Kashmir, a new element in the long-running dispute between India and Pakistan.

Of course, conflicts over resources are as old as human history. 'Blood' diamonds financed the conflict in Ivory Coast and the long, bloody civil war in the Congo was mostly about who got to control, and profit from, its vast mineral wealth. Despite rhetoric about freedom and religion, at least some of the strife in the Middle East has its roots in fights over the region's oil wealth.

Climate change, along with continued population expansion and changes to the world economic order, adds a significant new factor to the equation. We can live without diamonds and gold, we can even find alternatives to oil, but water, food, land, and air are irreplaceable. Major conflicts over those will be driven by desperation and fear beyond any we've seen before. Look at the riots in Indonesia and other countries when food prices rose as a result of redirecting palm oil, corn or rice to energy production. Yet, the United States and Canada continue to pursue a doubtful food-for-fuel subsidy program.

It's not all bleak. Human ingenuity is great and technology may still provide solutions to some resource problems, preventing or limiting conflicts between neighbours. Perhaps the world and its leaders will even come to their senses and find a way to mitigate climate change before the global temperature rises too much for our fragile environment – and even more fragile economy – to handle.

Think it can't happen? Take solace in this. The treaty that divides the water of the Jordon River between Syria, Jordon, Lebanon and Israel has survived more than sixty years of conflict and war. It is, unlike international financial companies, truly too big to fail.

When you put out a call for submissions, all you can really do is give a sense of what you're looking for; the rest is up to the writers. I was primarily looking for near-future (next fifty years) science fiction – though I was open to cross-genre and even urban fantasy. I was aiming for mostly original work; though re-prints would be considered.

As the guidelines said:

Blood and Water will gather the stories of the new resource wars that will mark the next fifty years – stories of conflict and cooperation, of hope and despair – all told from a uniquely Canadian perspective. Conflicts with America over Canada's resources, Canadian solutions to global problems or personal narratives of coping with change and conflict could all inspire your stories. Or you could surprise us!

In the end, there were remarkably few stories where conflict with our neighbours to the south was a central theme. In fact, while breakdowns in social order were a common background element – actual war only appeared in a handful of submissions. Perhaps, that is the 'uniquely Canadian perspective,' we were looking for: every conflict has a resolution, every problem has an answer.

I'm pleased to present an impressive collection of writers – from well established authors to rising Canadian stars to two for whom Blood and Water represent their first fiction sale – representing every region of the country and whose stories are set from coast to coast to coast.

Mostly science fiction, with a sprinkling of the fantastic, Blood and Water presents a mostly bleak future – but also offers hope and even joy. There is great writing here and fabulous stories. I hope you enjoy reading it as much as I did putting it together.