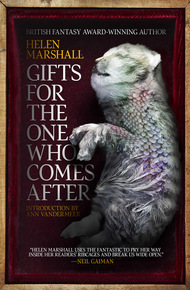 Helen Marshall is a Lecturer of Creative Writing and Publishing at Anglia Ruskin University in Cambridge, England. Her first collection of fiction Hair Side, Flesh Side won the Sydney J Bounds Award in 2013, and Gifts for the One Who Comes After, her second collection, won the World Fantasy Award and the Shirley Jackson Award in 2015. She is currently editing The Year's Best Weird Fiction to be released in 2017, and her debut novel Everything that is Born will be published by Random House Canada in 2018.

Gifts For the One Who Comes After by Helen Marshall

Helen Marshall's second fiction collection offers a series of twisted surrealities that explore the legacies we pass on to our children. A son seeks to reconnect with his father through a telescope that sees into the past. A young girl discovers what lies on the other side of her mother's bellybutton. Death's wife prepares herself for a very special funeral.

I first met Helen when she began working for the excellent Canadian small press (now not so small) ChiZine Publications. Helen was the editor assigned to me when ChiZine published my second collection, Chimerascope (included in this bundle). I didn't realize how lucky I was at the time. Helen has established herself as a master of the short form, and Gifts, her second collection, is ample proof. Aside from being a finalist for the Aurora Award, Gifts also won the 2015 World Fantasy Award for Best Collection and was short-listed for both the British Fantasy Award and the Bram Stoker Award. – Douglas Smith

STORIES THAT HURT SO GOOD

Helen Marshall has an uncanny way of getting under the readers' skin with her stories. We are itching and uncomfortable and yet . . . we are attracted to the scratch.Gifts for the One Who Comes After is Helen Marshall's second short story collection. Her first, Hair Side, Flesh Side,was embraced by readers all over and met with critical success. It dealt mostly with themes concerning the individual. Those stories were focused on the internal conversations we have with ourselves as we try to make sense of the world around us. Some of those stories explored how we fit into the universe.

In contrast, this collection deals with the connections we strive to make with others—those close to us and those that are merely in our way. Within these stories we have to deal with the legacies of the past—the histories of our ancestors, families and neighbourhoods. How do we maintain those traditions and yet still move confidently into the future? Will maintaining those traditions hold us back? And if we do abandon them will we lose something ultimately priceless in the process?

The collection opens with "The Hanging Game," which centres on what looks like a harmless children's game. Yet this game is deeply ingrained in the history of this small town community. So it's much more than just a children's game; it's the town's heritage as well.

If we are not deeply connected to others, if we push them away when they come close, what are we left with . . . an empty life? Perhaps as empty as Leah in "In the Year of Omens," who is waiting for the right signal. She wills it to come as it came to all the others. "There had always been signs in the world." But Leah is still looking for hers. She does not want to be left behind.

There are things better left unsaid—left undone—things that will cut you down in your prime if you give voice to them. Things that hang there on the periphery of your vision—you want to look but as soon as you turn your head, they disappear. As Melanie says in "Supply Limited, Act Now," "Why ya always gotta go doing that? Why ya always gotta go making things small just so that you can grow up? It doesn't have to be like that, you know? Why do ya wanna go on being the kids that just wreck everything because ya don't know better?"

The characters in Marshall's stories would do well to heed the advice of those that went before. They should think twice before leaving their long-held beliefs and traditions behind, because if they do discard these precious values, what will they be left with? In "Crossroads and Gateways" we hear from Dajan, "If only it were so easy to change the past." He struggles to make sense of what is expected of him. Yet he takes the next step. It is the only thing he can do.

So, let's talk about the legacy of the family. "Ship House" is full of family obligations and expectations, however, "It was home, it was home, but it didn't feel like home any longer." Eileen reluctantly returns to Ship House only to be surprised at the affection she feels, instead of feeling repelled. "Now Ship House felt strange on the inside to Eileen: too small and too large at the same time." But still, she can't turn away.

These tales demonstrate how families are the most complicated of relationships. Marshall's characters go through so many stages of connection to reach out to each other. In "The Gallery of the Eliminated" we are introduced to a different kind of natural history exhibit that makes you question your place in the wider world. You think about the inheritance you will leave once you are gone, "It's bewildering, you know. To realize that you are next. Link by link, generation by generation, the chain of your people are yanked into death. And you are next—the link before you? Gone. Your last protection. But losing a child is different. It's like seeing the end of the chain. Watching it dangle over the abyss." And yet in "The Zhanell Adler Brass Spyglass" we meet Danny who is only trying to figure out what went wrong in his parents' past so he can fix it and make everything right again. So, you see . . . it goes in both directions.

Then there are the stories where the familiar is strange and the strange becomes familiar, the memories are locked inside finding their way out when visuals stimulate the memory. Whether you are dating Death or trying to know and understand who your parents were before you were born; whether you are finally giving away the secrets of who you are or disappearing through someone else's magic, it's all about the connections with others. Families, neighbours, friends, lovers and exes. You can't imagine your life without them even as they seem to want to change you or to destroy who you really are. Or maybe they know you better than you do and you've only been fooling yourself. Even when you try to escape your destiny, it comes back with a vengeance and claims you. That's what these stories will do. They will claim you . . . and you will want them to do this. They will itch inside and out, but oh the feeling! Just as the song says, it will hurt so good when you can finally scratch that itch.