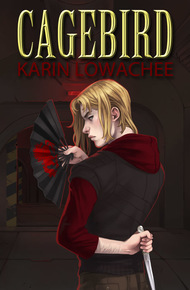 Karin was born in South America, grew up in Canada, and worked in the Arctic. Her first novel WARCHILD won the 2001 Warner Aspect First Novel Contest. Both WARCHILD and her third novel CAGEBIRD were finalists for the Philip K. Dick Award. CAGEBIRD won the Prix Aurora Award in 2006 for Best Long-Form Work in English and the Spectrum Award also in 2006. Her books have been translated into French, Hebrew, and Japanese, and her short stories have appeared in anthologies edited by Julie Czerneda, Nalo Hopkinson, John Joseph Adams and Ann VanderMeer.

Four-year-old Yuri Terisov watched his home colony destroyed by aliens. By six he'd succumbed to the idea that what was left of his separated family was never going to leave the desolate refugee camp. Then a captain named Marcus arrived at the camp and offered to take Yuri on his merchant ship to work. But Yuri did not know that Marcus was actually a disgraced military leader turned pirate and he intended to train Yuri as his protégé. After more than a decade of manipulation and intimidation, Yuri is a pirate captain in his own right: a killer, arms dealer, and spy—now imprisoned and hunted by his former comrades. When a government Black Ops agent offers him a chance to break free, reluctantly he agrees—but the deal isn't what it appears to be. Soon Yuri finds himself back in the midst of ruthless agendas that test the years of his training and threaten his survival with a dangerous proposition: an act of trust.

Karin is a Canadian speculative fiction author that deserves to be better known and more widely read. Hopefully, including her 2006 Aurora Award winning novel, Cagebird, in this bundle will help make that happen. If this is your first time encountering Karin's work, I'll predict it won't be your last. You'll want to read more, and I will suggest next reading Warchild and Burndive, which are the first two books set in the same universe as Cagebird (they are all stand-alone books). As well as winning the 2006 Aurora Award for best novel, Cagebird was also a finalist for the Philip K. Dick Award that year. – Douglas Smith

I don't remember the explosion, but I remember waking up, being deaf. My little brother lay facedown in the sand with singed holes on the back of his T-shirt. I reached to touch him, but somebody lifted me up. Mama. I grabbed on to her blouse, feet flailing until her arm went under me, and she crushed me against her breast. She was screaming, or it was something else in my head going off like an alarm.

I looked down over Mama's shoulder. Mishka stood in a circle of red sand. The sand was red because she was bleeding. She wasn't crying. She had only one arm, and her eyes were wide and unblinking, and the sand kept getting redder at her feet, making a dark puddle. The ragged sleeve on her left side was empty and soaked black.

The drops of blood seemed to fall in a slow warp, making a crash as they hit the sand.

My mouth opened. The air tasted burned. I coughed and looked away, pressed my cheek to Mama's.

Mama turned, and I saw Jascha with colorful grit all over his face. He was crying, kneeling in the box, holding Panda Paratrooper in a little fist. Mama bent to gather him up, trying to pick him up and hold me at the same time. She set me on my feet, and I twisted my fingers in her pant leg.

Mishka's mat stumbled out of our cracked front door with her mouth open. She looked as if someone had sucked all the color and the life from beneath her skin, leaving only white bone. She held Mishka to her side with one hand and picked up Mishka's arm with the other. Mishka's arm.

She said, "We'll fix it, darling, we'll fix it," as if the words were separated from her voice.

Half-buried in the sandbox was an arrow of sheetmetal with red on its edges.

"Wrap it, Katarina!" my mother said. "You must wrap it tight! Quickly! Do it, woman!" And she pushed Jascha against me so she could help Mishka's mat.

I held on to Jascha. He wailed. He never really cried, but now he opened his mouth and lost his voice among the sirens.

Our corridor was destroyed. Across the street four houses lay like broken teeth in a row of rubble, spilling their pieces all the way to our patch of grass. I could see past the houses and into the wall. It was black and fiery, and lights flashed in red and yellow emergency colors. The outer walls had closed. In school drills Mrs. Glantz had told us that if the colony was ever breached, we would not die from the outside moon environment. The extra outer walls would shut tight to block up any holes.

There was a hole in Mishka's sleeve with nothing to block it up. She just bled.

Papa was there now, cuts on his face, holding Isobel's tiny head against his shoulder. She was covered in her animal-print blanket. The dust and burned smell swirled around me and my hand was frozen to Mama's pant leg.

Jascha's grip on my waist hurt like claws. Papa said, "The shelters—"

People ran, spilled from their houses like they'd been tipped over the side of a table. A deep voice talked from overhead but it was too noisy to hear any words. Papa said again, "The shelters!" but he didn't grab Mama. He took Mishka's mat by the shoulder. And for a second Mama seemed to stop and grow dark, like someone had shut off the lights around her face. Papa started pulling Mishka's mat down the street.

"Hold on!" Mama said, sweeping Jascha up into her arms. Jascha's arms went around her neck like a knot, and we all ran. Mishka's mat was ahead of us with Mishka, but Mishka couldn't wrap her arms. Mishka stared down at me with her wide eyes. Red rivers swept down her mat's arm. Miskha's mat still held Mishka's arm with its bits of white and black and red on one end, like wet, mashed-up popcorn.

But she didn't answer, she held Jascha with one arm tight around him and clutched my hand with her other, and we ran after Papa.

It was so loud by then I couldn't hear our footsteps, couldn't hear the voice from the ceiling, could barely see Papa ahead of us cutting through the dust, lit by fires that licked the smooth walls.

"Slow down!" Mama said, coughing. I couldn't feel my hand, she held it so tight. But it was okay. Just as long as she held it.

Papa didn't slow down. People gathered around us running too until I couldn't see the walls and barely saw the ceiling. Only bodies stampeding in a herd, shouting, screaming, and streaks of faces blurred by tears. The press of flesh and clothing nearly squeezed out all my breath.

Then Mama let go of me.

People sliced between us. I couldn't see her anymore. They pushed from behind, moving me along, but they were so tall, and Mama disappeared in the shadows of the crowd.

The sirens swallowed my voice.

The sounds were like a raging beast, like all the enemies of Battlemech Bear were falling to our Moon. The world was crashing down. And I couldn't see anything. I cried so hard that everything melted and bled away, and Mama didn't find me, Papa didn't find me. Babushka was lost, and Mishka was bleeding, I saw her standing there with one arm gone. It was just in my mind, but it was all I saw.