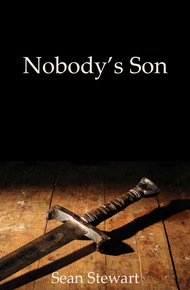 Sean Stewart is an award-winning novelist with a secret identity as a digital storyteller. He has published twelve novels, including Aurora award-winner Nobody's Son, and the World Fantasy Award-winning Galveston.

As a writer, designer and producer he co-created the Alternate Reality Game (ARG) genre of digital entertainment, and served as the lead writer on I Love Bees for Halo 2 and the Year Zero collaboration with Nine Inch Nails. He published the world's first transmedia novel, the international best-seller Cathy's Book, and won a Primetime Emmy Award for the transmedia TV comedy Dirty Work.

What happens after Happily Ever After?

Shielder's Mark dares a great quest, breaks a mighty curse, and wins the hand of a princess... all in Chapter 1. But Mark's deeds have consequences, and this working class hero has to learn fast to survive Court intrigue, an ancient curse, and the most bewildering challenge of all: marriage.

Gail looked back over her shoulder at Mark and blew out a long sigh. "What a day!"

Mark rolled onto his side, head propped on one hand. "One day? Surely not. A week at least."

"Be glad you weren't wedged into what I was wearing." Gail seemed subdued and anxious; in the shapeless nightgown she looked rather plain.

"You were very beautiful," Mark said.

"That's… gallant." Gail looked around the room, taking in the piles of velvet, the flickering rush lights, and the fire. The bed.

"I'll stick to the bargain," Mark said roughly. "I'll not force myself on you."

"O no! Of course you wouldn't. You would never do that," Gail exclaimed. "It's just… It sounds silly, but I miss my old room. I know that must seem stupid to a great traveller like you."

"Not stupid at all." How strange it was, to see this side of Gail. Not everybody sees her like this, he thought, honored. Tired and quiet and thinking of the past. He took it like a gift; something of herself she dared to show him. Something to protect, to hold like a butterfly in his hands.

"Childish." Gail flopped down on the bed, sitting beside Mark. "That's all it is. It's been easy for me to stay a child: you get your way when you're a Princess. And Lissa was always so capable, so mature; I never had to bother. But I'm a married woman now." Her small feet dangled over the edge of the high bed; she swung them in little circles. "I guess it's time to grow up."

"You sound like we're halfway dead! I'm too young to be a ghost just yet!" Then, greatly daring, Mark held a goose feather pillow cocked overhead. "One more moan and I'll have to thump you."

Gail giggled. "You must feel like a nanny, not a husband."

Like everyone else, Mark had always said he hated silly, giggling girls. He discovered he was wrong. Giggling made Gail infinitely prettier, like sunlight falling into water. "Well, an older brother maybe."

She cocked an eyebrow at him. "Is that how I kissed you this afternoon? Like a sister?"

"Well, no." Mark considered her thin warm mouth, her gold-brown eyes. "Not then."

Their eyes met and tangled.

"We should change the subject," she said.

Mark thumped her lightly on the head with his pillow and then slumped back, defeated. "So: new subject. All right−when I came to your room that first time, there was something on your worktable, a deerskin and a dead corset. You said that on our wedding night you'd tell me what it was."

Gail blushed. "Oh, that was nothing."

"Come on!" Gail shook her head and mumbled. "What? You sound like my friend that got his teeth kicked out gelding the dyer's mule."

"A present," she snapped, glowering. "It was going to be a present for you. It didn't work out."

"It's stupid," Gail said fiercely. "It's stupid and I'm embarrassed to show it to you, all right? Are you satisfied?"

"That must be so disappointing for you."

"Princess," Mark said gravely. "Do I have to remind you that you're talking to a man who braved the Ghostwood? Who dared the Red Keep? Who crossed the moat where the dead−"

"Mark! It's really not good!" Gail she stared at the floor. "Will you promise not to laugh?"

"Cross my heart/ And swear to God/ On pain of Death/ And Aron's rod."

Blushing furiously, Gail shuffled into the far room. She returned a moment later and put a… thing in Mark's hand.

"Well. It's made of leather," he said, frowning. "There's a bulge here: sort of hedgehog­shaped…"

"It's a hat, stupid!" Gail snatched it away and held it right ways up. "Here's the brim and here's the crown. You wear it on your head to keep the rain out. I made it for you. There: are you satisfied?"

Gently Mark took back her present. It was without a doubt the most misshapen, lopsided abortion of a hat he'd ever seen. It looked like a tiny leather quilt with an upset stomach. "It's so … pink," he said.

And indeed pink was the word for it, though the dye was badly blotched and mottled. Some parts of the brim were burgundy, while much of the crown was as pale as cherry blossom.

"I wanted to make it myself," Gail said, red with mortification. "I shot the deer and skinned it, I hung the leather to be cured, I gathered madder to do the dyeing and then I tried to sew it all together but it's a horrible mess and you promised you wouldn't laugh and I'm stupid and that's all there is to it."

"You did all that?" Mark said wonderingly. "You skinned a deer? Princesses don't skin deer."

"This one does. Very badly." Gail's eyes were bright; Mark couldn't tell if she was going to cry or kill him. "It seems like it ought to be easy, but I was never very good at sewing and anyway it takes forever to get a needle through leather. I couldn't figure out how to make the crown stiff, so I thought I could use part of a corset to firm it up. And the dyer gave me the same mordant he used to make your cinnamon tunic, but I guess it works differently on leather than it does on wool and anyway it's all ruined."

"You did all that?" Mark blinked at the ungainly heap of leather in his hand. A Princess skinned a deer for you. And that's a bigger miracle than anything that happened in the Ghostwood, Shielder's Mark.

And … what did you get her?

Nowt. Just because they all seemed so rich, you never even thought to give something that was worthy of her.

But she did not use her riches to make your gift. She made it with her own fine hands. While your hands, which you thought so hard and tough and clever, you left idle. You that are so smart wi' knife or file or hammer didn't make her so much as a wooden box to put her jewelry in.

Mark felt like dirt. "I think it's the best hat I've ever had," he said, clapping Gail's gift on his head. He could feel a ring of little ridges where the whalebones in the corset bulged through the inner lining. "I'll wear it every weather."

"In my bed, in my bath, in my grave!" She giggled again. He wanted to make that happen again, over and over. He marched to the window and studied his reflection. As a courtier's hat, it was a joke. But Mark was from the country, and as a plain, country hat, it could just barely pass.

Mind you, it was pretty damn pink.