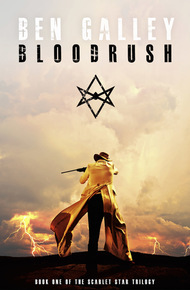 Ben Galley is an author of dark and epic fantasy books who currently hails from Victoria, Canada. Since publishing his debut Emaneska Series, Ben has released a range of epic and dark fantasy novels, including the award-winning weird western Bloodrush and standalone novelThe Heart of Stone. He is also the author of the critically-acclaimed Chasing Graves Trilogy.

Ben can be found on Twitter or vlogging on YouTube @BenGalley, or loitering on Facebook and Instagram @BenGalleyAuthor. You can also get a free ebook copy of his epic fantasy The Written at www.bengalley.com.

"Magick ain't pretty, it ain't stars and sparkles. Magick is dirty. It's rough. Raw. It's blood and guts and vomit. You hear me?"

When Prime Lord Hark is found in a pool of his own blood on the steps of his halls, Tonmerion Hark finds his world not only turned upside down, but inside out. His father's last will and testament forces him west across the Iron Ocean, to the very brink of the Endless Land and all civilisation. They call it Wyoming.

This is a story of murder and family.

In the dusty frontier town of Fell Falls, there is no silverware, no servants, no plush velvet nor towering spires. Only dust, danger, and the railway. Tonmerion has only one friend to help him escape the torturous heat and unravel his father's murder. A faerie named Rhin. A twelve-inch tall outcast of his own kind.

This is a story of blood and magick.

But there are darker things at work in Fell Falls, and not just the railwraiths or the savages. Secrets lurk in Tonmerion's bloodline. Secrets that will redefine this young Hark.

This is a story of the edge of the world.

There are many places in this world where we humans are not welcome. Antarticus, for example, has slain explorer after explorer with its wolves and winds so cold and fierce they can cut a man in half. Or the Sandara, plaguing travellers for millennia with its fanged dunes and sandstorms. Or what about the high seas, and the Cape of Black Souls, where the waves swallow ships whole, and never spit them back out? But there are darker places on this earth. Much, much darker places.

These are places that time has forgotten, that we have forgotten, now that we've turned our attention to industry, to business, and to science. Our steam and our clockwork may have conquered the globe, but we have built our cities on old and borrowed ground, a ground that knew many creatures and empires before it felt the kiss of our own feet. These were the ages that spawned fairy tale and folklore, dreams and nightmares, the world that we trampled in our march for progress, burying it beneath cobble and railroad.

But stubbornness is a trait of victors, so they say. The vestiges of this old world are still clinging on, hiding in the dark places, lost in the shadows, glaring at us from behind their magic. Oh, they are very much alive, friends, hiding in the cracks of reality, the spaces between your blinks. And woe betide anybody that dares to go hunting for them. You would have better luck in the Sandara.

We humans remember the darkness very well, and how its monsters prowled the edges of our campfires and snatched us into the night. We simply refuse to acknowledge it is anything other than irrational fear. Ghost stories. Boogeymen. Old wives' tales. Nonsense, though we secretly know the truth. So much so that when we read in the newspapers that a man was ripped to shreds by a mysterious assailant in the old dockyards last Thursday, we do not think psychopath, we think werewolf. Maybe we would be right.

There are dark things in the shadows, and they are far from fond of us humans.