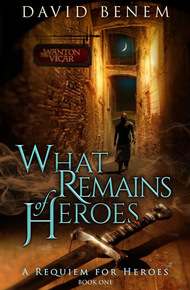 David Benem is an author of fantasy fiction and a member of the SFWA. What Remains of Heroes is his debut novel. David resides in St. Louis, Missouri, though his mind is often elsewhere.

What Remains of Heroes by David Benem

What Remains of Heroes, Book One of A Requiem for Heroes, is an unapologetically dark and gritty epic fantasy. It begins the tale of a captain-turned-drunken-wretch, a misanthropic cleric, and a band of assassins struggling with the madness of one of their own. These broken heroes must battle demons both within and without if they are to save the kingdom from the old evils lurking in its shadows. They may be its only hope.

Karnag Mak Ragg squinted in the morning sunlight, flint-colored eyes surveying the vast valley of oaks and poplars draped with mist. The Ghostwood, at the southernmost edge of the kingdom of Rune, struck him as similar to the wind-bitten highlands of his youth. Both were hard countries, unforgiving and full of predators.

He pressed himself upward to stand and shook fresh blood into brawny limbs. Morning meditations were a ritual common among his people, used to seek hidden truths or consult with ancestors long dead. Karnag was not given to such nonsense, but found the meditations stilled his restless mind. With his waking hours rife with violence, he needed what calm he could find.

"Awake at last, eh?" asked Drenj from the mouth of a small tent at the opposite end of the hilltop clearing. He was a Khaldisian from far to the south, his brown tunic sagging from his form to reveal olive skin covered in tattoos. "I was beginning to think you'd learned to sleep on your knees. Like a camel."

Karnag ignored the young man's remark and set about readying his weapons. He often grew weary of such prattle, borne by nerves or bravado and bearing no meaning. Such words were breaths wasted rather than saved for combat.

"Are you certain I can't lend you a knife?" the southerner said, dragging a whetstone down the length of his curved Khaldisian steel.

Karnag brushed aside the thick braids of his black hair and studied the weapons he'd laid on his bedroll, all agleam in the morning sun. Six daggers balanced for throwing. Two swords, one short for tight quarters and the other a long, two-handed blade for cleaving men apart. A hunting knife he'd used for gutting deer that fit neatly in his boot, and a blackjack for laying out a man without spilling blood. "I'm certain," he said.

"Do you figure on using all of those things in a fight?" asked Drenj.

"Careful, lad," said Tream, a dark-eyed thug with rotting teeth. "You're new to this company, and Karnag's not the sort to be trifled with. Least of all by a skinny whelp like you. He's a damned nasty killer, boy. Nastiest of them all."

The Khaldisian seemed undeterred. "Are they trinkets for decoration?"

Karnag scowled, his patience wearing. "They all have their purpose."

"You have only two hands, you know," said Drenj, laughing overlong at his joke as though encouraging the others to join him.

"And you have but one mouth," Karnag said, "but you blather on as though you have ten. Perhaps my hands are as potent." He snatched a dagger and flung it hard and true. It cracked into the center support at the mouth of Drenj's tent, mere inches from the youth's head. The tent collapsed about him in turn.

The company of hired killers laughed heartily. Drenj cursed and yanked the linen away from his form, his kohl-lined eyes narrowing. "Are all of you northerners like this? Savage ingrates with thin skins and thick heads?"

Fencress Fallcrow, a raven-haired woman clad as ever in black, sauntered across the clearing. She was a hard lass, rough-featured and muscular, yet had a roguish charm with her sapphire eyes and biting wit. She stopped near Drenj and flipped a copper coin at him. "And are all of your kind painted like whores? I fear you make even me feel like a man, Drenj."

"Not much of a stretch, eh?" said Paddyn, a scrawny lad with grubby skin and a missing front tooth.

The company laughed again, all save Karnag.

Karnag slid his daggers into the sheaths sewn into the blood-red leather of his jerkin. He straightened and his countenance darkened. "Shut your mouths and saddle the horses," he said, sweeping his eyes across his four companions. "We have murder to make."