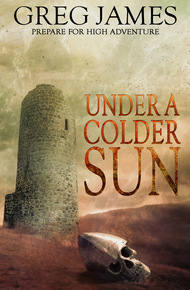 Greg James is a critically-acclaimed and best-selling self-published author. He was born in Essex and grew up along the south-east coast of England. He studied literature and media at university and has taught English as a foreign language in the Far East. He has written the critically-acclaimed Vetala Cycle trilogy and the best-selling Age of the Flame series. He lives in London where he can be found writing into the wee small hours of the morning during the week, and sleeping in on Saturdays.

Under a Colder Sun by Greg James

The first book in the Khale trilogy!

Enter a Grimdark Fantasy Adventure set in a world of Darkness and Chaos!

Khale the Wanderer: dark warrior of legend, a reaver with a demon's soul. King Alosse: ruler of Colm, willing to risk everything to save his city and its people. Princess Milanda: an innocent, kept pure since birth, unknowing of her fate. Neprokhodymh: the cursed city of sorcerers where Khale must make a choice that will scar him for life, or fall into darkness forever.

"Follow me," the mercenary said. "Khale will see you now."

Leste said nothing; her thoughts were on Yrena and Osta. Gods' bones, she swore she'd not forgive this Khale for the threat against their lives. She trudged slow through the marsh, following the dim shades of her two companions, noticing the pale lights that drifted on the water's surface and the even paler shapes that danced beneath. This was a haunted place, so many said in Colm. Though it was easy enough to say such things and be safe and warm at home than to walk through these mires in the dark.

"Here we are," the mercenary said.

The ground became firmer, and the mist retreated somewhat, revealing an isle in the midst of the marsh. Tents of cured skins were arranged before her, supported by stanchions fashioned from wood and animal bones. A low light burned within the largest one.

The mercenary stepped forward and drew the tent flap aside, allowing Murtagh, and then Leste, to crouch and enter. The light in the tent came from a fire that burned without smoke. Leste glanced around and saw as many tomes and grimoires as there were ornamental chests, strips of hide armour, and weapons hanging in sheaths and scabbards. Someone sat across from them on the other side of the fire.

When Leste's eyes adjusted to the gloom, she saw that it was a man. His body was solid, firm muscle underneath a patchwork armour of furs and leathery skins. His hair and beard were a dirty, greying mane with the skulls of small animals woven into its threads. His eyes were shielded by the crags of his forehead, which cast his face deep into shadow.

Leste waited, shifting her weight from one foot to the other as Murtagh stood calmly with his arms at his sides.

The man in shadow was immersed in a papyrus scroll held between his thick fingers. He had not looked up since they entered.

Murtagh grumbled in his throat.

The man in shadow did not raise his face, but Leste saw his eyes flash to the fire at the sound Murtagh made. They were yellow, but not as a wolf's or a cat's eyes—more like a snake's. Her mouth became dry when they turned on her and held her gaze for a moment, before returning to the scroll.

"We are here to see Khale," Murtagh said.

"We are here to speak with you."

"Then speak. Khale hears you."

Murtagh nodded and went on, "Will he do me the courtesy of addressing me face-to-face?"

"Do not weary my temper, old man. I can have your throats cut, your bodies reamed and then thrown into the marshes, where they will never be found. If it comes to that, I can do the same to those you love."

"We are not children for you to threaten," Murtagh said. "We are of the City-Watch and here on the King's orders."

"You are children to me," Khale said, still not looking at them. "You are nothing to me. I value the message you bring and the promise of gold that comes with it. Now, speak and tell me the words of your King."

Leste's hand searched for the hilt of her sword. This thief, this swamp-dwelling brigand had dared to insult them, to say they were nothing. She could feel a pulse pounding in her temples and heat coursing through her veins.

"We will tell you nothing," she said, "until you face us like a man and recant your words. You are a brigand and a thief. You cannot speak to us without respect."

Khale stopped his reading. He curled the scroll and fastened it with a clasp of fashioned brass. Then he set it aside, rose quietly to his feet, and raised his face out of shadow to meet her indignant gaze.

Leste's mouth went dry once more. She felt a queer sickness pass through her body and come to rest in her bowels. Khale's eyes were colder suns even than the one that hung in the sky. Their tainted yellow hue made her think of disease, rot, and mildew. There was no humour in the worn, scarred lips that spoke. "So, now we are face-to-face, little girl. Tell me what your King wants of me."

Leste licked her lips, trying to wet them, but her tongue was a sand-worm that refused to move.

"Speak," Khale said, now having moved around the fire to stand over her as a mountain stands over a stunted sapling that is desperate for nourishing light. "Speak! Or I will call my men so they can rape your tight little arsehole before they throw you in the water to drown."

She could feel the flesh at the nape of her neck beginning to creep and itch as she continued to meet Khale's unwavering gaze. Something inside this man was deeply rotten, and there was no balm or cure for it.

Finally, she found the strength to look away. She steadied herself, pressing her hands together. Taking a breath, she returned her gaze to his face but avoided meeting his stare.

"Something ails you?" he said, without empathy. "Perhaps being this far from safe walls does not agree with you."

Khale turned his gaze on Murtagh. "Go on, old man. I would hear why your King has sent you out into the marshes on the Subote to seek counsel with me. I thought the Church of Four kept a curfew on every eighth day until dawn"—he smiled—"or are you not of the one true faith?"

"An errand," Murtagh said, ignoring Khale's slight. "The King wishes you to perform ... an errand."

"An errand?" Khale burst out laughing. "An errand? Does he think I'm his squire? Tell him to go fuck himself."

Murtagh and Leste did not move.

"Go on, both of you. Get out and thank the Gods' bones you made me laugh. I've grown short of good humour in these marshes."

Khale's laughter trailed off. He drew himself erect once more. "I said go. It'll be worse for you if you stay. These men are hungry. They're angry. They've not had a woman in months, and an old man will do just as well for some of them. I'll give you to them. You'll be dead by morning."

Leste stared into his eyes. "I understand your ... unwillingness, Master Khale. Men you call companions have been slain by the Watch. You do not wish to take coin from those who have ordered their deaths."

Khale snorted. "These men are mine, but they're not my brothers nor my friends. There's no honour among thieves, little girl. Whoever's knife is the sharpest wins. Whoever holds the most power is the strongest, that is the law. The only law."

For some reason, she felt he was talking of more than the law of brigands.

"Make it double and we have something to talk about."

"Kings have fortunes, do they not? I want Alosse's in my saddlebags. Unless he does not have twenty thousand. Does he?"

"Then you'd better go and ask him." Khale laughed. "I'll have a man at The Black Rat just before sundown tomorrow. Be there. He'll find you. Then, we can talk terms about this errand of the King's."

Leste could tell he was not bluffing. He would not move from this camp for less than twenty thousand golden-eyes. Colm was poor; he knew it, and yet he was trying to bankrupt the city with his price.

He nodded towards the tent flap. She went through after Murtagh. There was a strange air about Khale, something more than mere grace or authority. She would have said it was power, strength perhaps, but the flickering yellow sheen of his eyes made her think of worse terms to describe his presence: malevolent, corrupt, benighted – Evil!