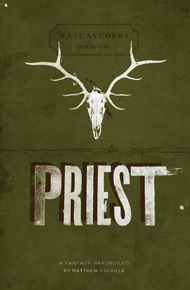 Matthew Colville is a writer and video game developer living in Orange County, California. He was the lead writer for both Mercenaries games from Pandemic Studios, and most recently the sci-fi epic Evolve.

He spends most of his time thinking about writing, games, film, and making sure his cats have food.

PRIEST follows Heden, the titular cleric, as he journeys into a haunted wood to solve a murder no one wants solved.

A hardboiled fantasy influenced by Parker and Chandler, PRIEST is the first in an epic 'getting the team together' story. The sequel, THIEF, is already available.

Heden spoke a prayer, and five men, each red-faced, shouting, holding various improvised weapons, in various stages of drunkenness, fell to the ground. The inn went silent as all eyes turned to Heden, everyone thinking he'd just killed five men.

In concert, the men on the floor all started to snore loudly. The inn relaxed.

Renaldo was frozen in place, his attackers slumped before him, his rapier still pointed where the lead ruffian had been standing. He had one leg on the back of a chair, another on a table with food and drink now scattered over it, and his off-hand reaching up for the candleholder than hung from the ceiling.

"There were only five of them!" he objected.

Heden walked up to him, gingerly stepping over the sleeping idiots, as Renaldo uncurled himself from his fighting pose.

Renaldo looked away, disgusted, and then turned a scowl on Heden. "Good entrance," he admitted reluctantly. "Terrible sense of timing, though." He sheathed his rapier and smoothed the ruffles out of his expensive silken tunic, the red vest matching his red hose.

"It's time for you to get out of here," Heden said.

"If it were anyone but you saying it, friend. Give me time to collect my earnings. There are many in town who owe me for a week's gambling profits."

Heden grabbed his tunic and pulled the little man forward. Initially, Renaldo tried to object but once Heden started to whisper in his ear, Renaldo stopped struggling and listened.

"There are five thousand urq less than two days march from here."

He released Renaldo. Taking time for one perfect, comedic beat, Renaldo replied; "They can keep their money. When do we leave?"

"We!" Renaldo said, turning and gathering his lute. "Yes!"

"No, I'm serious," Heden said. "You can't go where I have to go." For one thing, Heden hated flying two on the carpet. He looked around the packed room at the people still seeming to enjoy themselves. "You don't seem to have had much effect on these people."

"No?" Renaldo asked. "I doubt there is a man here who was present last time we met. These are farmers and tradesmen from outlying villages, newly arrived. I have spent my time inspiring the citizenry to take matters into their own hands and travel south to safer lands." He stopped suddenly, looking past Heden, mouthing the words he had just spoken. His hands assumed positions on the fretboard and strings of his lute and he mimed played a few fictitious notes as he mouthed the words again, his head moving back and forth.

"Not bad," he said, and looked back at Heden. "In any event," he slung his lute over his shoulder and draped his cape over one hand. He pointed accusingly. "You owe me a tale, and as I surmise you are not yet dead, it is not too late."

"Listen, Renaldo," Heden said. "That army…I just stopped here to tell the baron the order isn't coming. And give you the word so you could get out."

"How did the baron react to that?" Renaldo asked.

"Don't ask," Heden said darkly. "Let's just say it's me here telling you to leave and not the baron telling everyone to leave. I'm caught up in this now so unless you really hate urmen and want to kill a few before you die, you've got to get out of here."

"I'm…it's complex." Heden didn't know what he was going to do.

"You and I against five thousand urq?" Renaldo pondered the issue. Heden was getting impatient. "I know many withering insults in urqish." He appeared to make up his mind. "You don't happen to know three more dependable men? I would feel more comfortable with five against five thousand. It is more...dramatically it has…" the Riojan waggled his hand. "You understand."

Heden stared at him.

"Now before you turn and stride away purposefully like a man exiting stage left, which you are very good at, I might add. You're a natural entrance and exit man, audiences love that. Before you go I want to point out that I am a far more subtle and clever man than you. More handsome as well, but that is no matter.'

"I would never grab you in front of all these people to whisper some point critical to the plot in your ear. Far too obvious."

Heden stared at him for a moment, parsing what he just said.

Renaldo's eyes flickered almost imperceptibly behind Heden and to his left. There was no way anyone else in the room could have seen it even if they were looking for it.

Heden didn't acknowledge Renaldo's meaning, but Renaldo smiled widely as he realized Heden had it.

Heden grabbed a passing patron, easy to do in an inn packed with townspeople and refugees, pulled out his hand and plunked a crown in it. "Get to the stables," he told the bearded farmer, "and get me the fastest horse in town. There's another crown in it for you if you're back in half a turn."

Heden didn't even pay attention to the man's response but having turned to stop the man, used the opportunity to look as discreetly as possible in the direction Renaldo indicated.

There was, among the press of people, a small table in the corner at which sat a polder. A small man-like creature about three feet high. He had a mass of curly blonde hair atop his wide face and appeared to be sleeping, his head lying back against the wall, his mouth open, a half-empty bottle of strong liquor in front of him.

Heden would have thought nothing of it, but for the fact it was the only table at the inn with only one patron at it.

Heden turned back to Renaldo.

"Very well, if you insist. I heard tell you were a Prelate," Renaldo said. "Where are you from?"

"Celkirk," Heden said. He didn't bother telling Renaldo about the Hammer & Tongs. He'd enjoy finding out on his own more anyway.

"I have not been there. A week's ride on a fast horse, I hear. Too far, I think. Perhaps I shall continue east."

"I hope we meet again," he said awkwardly.

"Oh we will," Renaldo said, doffing his elaborate cap and taking the proffered hand. "The gods are terrible at second drafts. And once they cast a man in a role, they never change their minds."

With a smile and a discreet flourish, the Riojan troubadour was gone.