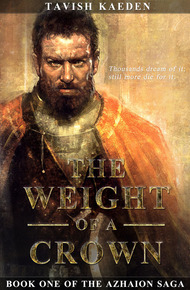 Tavish has been reading works of fantasy since he was knee high to a nilgai. One day he decided to try his hand at writing something and the Azhaion Saga was born. When he is not in front of a computer writing about imaginary worlds, he can often be found in front of a computer writing about more mundane topics or, occasionally, exploring the many wonders of suburbia on a brisk constitutional.

The Weight of a Crown by Tavish Kaeden

After centuries of bitter conflict the realm of Esmoria is at last united under the banner of a single king. On the surface the realm appears to be enjoying its first taste of peace, but lingering resentment and the untimely death of the new ruler threaten to return Esmoria to political chaos.

Meanwhile, in the farthest reaches of the frozen north, a dethroned monarch's plot for revenge awakens a long-forgotten evil. As darkness and treachery descend upon the realm, a young escapee from a forced labor camp, a disenfranchised soldier, and an epileptic engraver's apprentice find themselves at the heart of the troubles.

When Nicolas opened his eyes, he found himself looking up at a face webbed with intricate ink markings and set with a pair of startling green eyes. The room was dark and lit only by a few candles, but the light seemed to collect around the strange figure in white robes before him. Even with his mind still foggy from the fit, Nicolas had no difficulty determining that this was the stranger Rujo had mentioned earlier.

"Are you alright?" asked the figure in a soft voice, not much louder than a whisper.

"I think I'll be fine," said Nicolas, realizing he could taste no blood in his mouth, nor feel the usual dull throbbing in his tongue.

"I took the liberty of cleaning and anointing your wounds," said the strange man, as if he sensed what Nicolas was thinking.

"Thank you," said Nicolas. Normally, waking up in the presence of so peculiar a stranger would have completely unnerved him. Yet Nicolas felt not the least bit worried or threatened. In fact, he felt strangely comfortable.

"Who are you?" Nicolas wondered aloud.

"My name is Zorje Ghadahim, but most people simply call me Jorj, if they bother to call me by any name at all." The man spoke in a thick accent, but seemed to have a flawless command of the Church tongue.

"Why am I here?" asked Nicolas.

"Ah, you were brought to me by a limping man who called himself Welo. He said he had witnessed you fall and begin to twitch. He became very worried and took it upon himself to carry you here. No small feat, I must say, for a man with a limp like his."

"But, why did he bring me to you? Sister Stacy usually takes care of those who get hurt, and Welo was on his way there anyway. He knows her quite well—how did he even know of you?"

"Sadly, the Welo man came looking for me. By my robes he had surmised I was a healer, and he wanted help with his leg. I am no worker of miracles, however, and such an… obvious disfigurement I could never hope to heal."

"And he brought me to you, even though you could not help him?"

"I… impressed upon him during our meeting that I was looking for someone like you."

"I'm already apprenticed to Gleydon the engraver," said Nicolas. "And I haven't really any other trade skills. Certainly I cannot heal, or… do whatever it is that you do."

"Ah," said Jorj, his smile becoming a little mischievous, "but you can do what I do. That is why I have sought you out."

"And what exactly is that?" asked Nicolas, wondering what this man knew about him that could possibly be desirable.