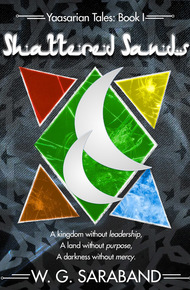 W. G. Saraband (pen name for Miguel Boronha) was born in the south of Portugal, in 1991. Having little access to books written in English, and often disappointed by the Portuguese translation of some of his favourite books, he soon began taking every opportunity to order as many book from abroad as he could.

While doing a Master's degree in Medieval Islamic History in the University of Lisbon, he wrote several short-stories and began many more novels, which never saw an ending (or a middle, for that matter). There was one exception, Shattered Sands, which is first self-published and one of the ten finalists in the Self-Published Fantasy Blog-off.

For years, Tamazi felt she was nothing like the other slave-girls. It was not until her master disappeared, the Great Vizier of the desert kingdom of Rilmaaqah, that a power older than the sands themselves took hold of her; a power that could finally free her, or enslave her forever.

Rilmaaqah is in chaos. The fires of rebellion spread, and the winds of change threaten the Mageocracy, as the common people rise with the courage to claim their share. But the sands hide many things, and it falls to an unlikely group of people to put a stop to death, before she sings her lullaby to the living.

Tamazi hated slave-hoarders. But she hated it even more to stand there, at her master's side, as he was shown an array of half-naked boys and girls, all available for purchase. Tamazi had always been the Grand Vizier's favourite, and that did little to ease the contempt with which the other slaves looked upon her.

"I've saved this one especially for you, Your Radiance," the hoarder said, pointing to a boy no older than nine summers. "I heard you were in need of a new cupbearer, after what happened with the last one."

"Tamazi has proved herself perfectly suitable in that regard," Barka said, without looking at her. "What I need is a new ca-ca-carer for my falcons."

The slave-hoarder eyed Tamazi suspiciously. She had just lost him a few gold coins of profit. "I didn't know Your Radiance had an interest in falconry," he said, bringing his attention back to the Vizier. "I assure you any of these can be taught the art. They'll be ready to assist you in no time."

"If I wanted to p-pay for a slave to be trained in falconry, I'm certain Tamazi prove herself excellent in that task, too."

Tamazi did not share her master's confidence. Birds had always scared her. But that mattered little. In the eyes of their masters, it was best for slaves to think only as much as their current task demanded.

The slave-hoarder, realizing there was little chance of striking a deal with the Vizier that day, went to Tamazi. He grabbed her chin, forcing her mouth open. "Good teeth. Strong jaws." He cupped her breast. "Neither fat nor thin. Might I ask where you acquired such fine a specimen, Your Radiance?"

"My mo-mother gave her to me when I as a child." Barka said, and then he yawned. "I thought you had some remarkable slaves to show me today, but all I see is more of the same."

"Your Radiance, these are the best slaves in the city, surely—"

"They won't do. Bring me some from elsewhere, next time, or don't b-bother at all. I have a kingdom to rule."

"Of course, your Radiance." The slave-hoarder bowed, with a forced smile.

Barka left the patio, walking slowly. Tamazi followed behind. In the palace's corridors, she noticed him limping slightly. His foot must be giving him trouble again, she thought. That explains the excessive stuttering. They went into the banquet hall, where the food had already been laid out on the marble table. Stuffed owl, camel's cheese, grilled fish, hot cinnamon cakes. The air was rich with smells, and the contrast between the Vizier's palace and Rilmaaqah's reality was never made more evident.

She ran ahead, and slapped the silk pillows on the Vizier's chair. As Royal Cushioner, ensuring his comfort was her priority. Four kitchen slaves were still adjusting some details on the food decorations.

That was all Tamazi needed to hear. She ran to the kitchens, filling a wooden bowl with water. She took it back to the Vizier, and removed his leather boots. His right foot was swollen, redder than the meat he so much enjoyed.

Carefully, Tamazi rubbed the sole of his foot. Barka ignored her and addressed the banquet in front of him. He reached for the owl's wing with some effort, taking a single bite out of it before cleaning his greasy fingers on his puffy belly and moving on to the next thing.

"What day is it?" Barka asked, chewing a piece of meat.

"Third of Numbari, Your Radiance," Tamazi answered, stopping the massage.

"Already? Well, if the deed mu-mu-must be done, it must. Tell the ca-ca-carriers to have the pa-pa-palanquin ready. I'll visit my wife today."

"Yes, Your Radiance." She got back to massaging his swollen feet, before turning to the Vizier once more. "The magistrates will assemble in the Palatine College today. If Your Radiance finds it preferable to a meeting with Vizieress Ingrati, I could tell the carriers to take you there."

If any other slave dared making such a suggestion, they wouldn't live unpunished for another second. Tamazi, however, was different. Being the Vizier's favourite held certain rewards, even though it was the cause of much envy amongst some of the bitterest slaves. And slaves being what they were, Tamazi had very few friends.

"To choose between the scorpion and the wasp," Barka said. He sighed. "Alas, if I m-m-miss another weekly appointment with my wife, I'll have to endure another lecture from the Lord Steward about the obligations of ma-married life. And worse than being lectured about that, is putting it into practice with my wife."