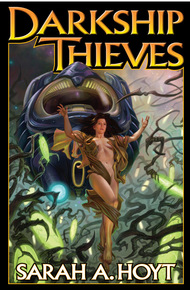 Darkship Thieves by Sarah A. Hoyt

Athena Hera Sinistra never wanted to go to space. Never wanted see the eerie glow of the Powerpods. Never wanted to visit Circum Terra. Never had any interest in finding out the truth about the DarkShips. You always get what you don't ask for. Which must have been why she woke up in the dark of shipnight, within the greater night of space in her father's space cruiser, knowing that there was a stranger in her room. In a short time, after taking out the stranger—who turned out to be one of her father's bodyguards up to no good, she was hurtling away from the ship in a lifeboat to get help. But what she got instead would be the adventure of a lifetime—if she managed to survive. . . .

DARKSHIP THIEVES by Sarah A. Hoyt is a perfect example of Adventure SF, space pirates, exotic settings, great characters. Sarah is an immensely hardworking author, and she and I are collaborating on a new fantasy novgel. I gave a blurb on this book when I read it in manuscript. I am very happy to present it here. – Kevin J. Anderson

I never wanted to go to space. Never wanted see the eerie glow of the Powerpods. Never wanted to visit Circum Terra. Never had any interest in discovering the truth about the darkships. You always get what you don't ask for.

Which was why I woke up in the dark of shipnight, within the greater night of space in my father's space cruiser.

Before full consciousness, I knew there was an intruder in my cabin. Once awake, I couldn't figure out how I knew it. The air smelled as it always did on shipboard, as it had for the week I'd spent here—stale, with the odd tang given by the recycling.

The engines, below me, hummed steadily. We had just detached from Circum Terra—a maneuver that involved some effort, to avoid accidentally ramming the station or the ship. Shortly we'd be Earth bound, though slowing down and reentry let alone landing, for a ship this size, would take close to a week.

My head felt a little light, my stomach a little queasy, from the artificial grav. Yes, I know. Scientists say that's impossible. They say artificial gravity is just like true gravity to the senses. You don't feel a thing. They are wrong. Artificial grav always made me feel a little out of balance, like a couple of shots of whiskey on an empty stomach.

Even before waking fully, I'd tallied all this. There was nothing out of the ordinary. And yet there was a stranger in my cabin.

Years in reformatories, boarding schools and mental hospitals, had taught me that the feeling I woke up with was often the right one. Something had awakened me—a door closing, a step on the polished floor.

Now, why? Knowing the why determined how I dealt with it.

Three reasons that came to mind immediately. Theft, rape, murder. But all of them were impossible. The space cruiser belonged to Daddy Dearest and there was no one aboard save Daddy Dearest, my charming self—his only daughter—and his handpicked crew of about twenty five, half of whom were his bodyguard goons and half maintenance-crew of one description or another. Far more than I thought it would take to run a ship this size, but then what did I know about ships?

Now, whatever I thought of my father, the Honorable Patrician Milton Alexander Sinistra of the ruling council of Earth, I neither thought him stupid nor stupidly inclined to trust people. His goons were the scum of the Earth—only because there were no real populations on any other planet—but they were picked, trained, conditioned and, for all I knew, mind-controlled for loyalty. Hulking giants all, they would, each one of them, have laid down his life for my father. Not the least because without Father they'd only be wanted men with no place to hide.

As for his other servants and employees, they were the best Father could command, in any specialty he needed.

None of them, nor anyone who had ever seen Father in a white hot rage would ever do anything against Father or his family. Well . . . except me. I defied Father all the time. But I was the sole exception.

There were no crimes at our home in Syracuse Seacity. There weren't even any misdemeanors. No servant had ever been caught stealing so much as a rag from the house stores. Hell, no servant broke a plate without apologizing immediately and profusely.

So the three reasons I could think of for an intruder to be here didn't apply. No one would dare steal from me, rape me or murder me under Father's roof. And no one—no one—who had even heard rumors about me would do so absent a fear of Father.

Without opening my eyes, I looked through my eyelashes—an art I'd learned through several sojourns at various institutions—and turned in bed. No more than the aimless flailing of a sleeper seeking a better position. The cabin was dark. For a moment I could see nothing. I could turn the lights on by calling out, or by reaching. But either of those would let the intruder know that I wasn't asleep.

And then, my eyes adjusting, I saw him standing out of the deeper darkness,. It was a him. It had to be a him. Broad shoulders and tall. He stood by my bed, utterly still.

My heart sped up. I tensed. I didn't know who he was, nor what he was about to do, but it couldn't be good. No one with good intentions would come in like that, while I was asleep and then stand there, quietly waiting. As if to make sure I really was asleep.

Then I thought it might not be one of Father's people at all. Our security was good. Really good. But we'd just been on a four-day-long state-visit to Circum Terra, where the population were the top scientists in their field. Smart people. Smart people who had been isolated for a couple of years. Smart people who had stared and sighed when I walked around and attended parties and was my most flirty self in the clothes that were one of the few perks of being Father's daughter.

If one of those people had sneaked aboard . . .

Moving slowly, in the same seemingly aimless movements, I clenched my hands on the blanket about an arm's length apart, and made fists, grabbing handfuls of the stuff. I'd have preferred to twist it around my wrists, so it wouldn't come loose, but that would be way too obvious.

The man in the dark took a step towards me. He was good. If he was a scientist, he must have been a cat burglar in a previous life. If I hadn't been awake, he surely wouldn't have awakened me now.

I sprang. I hopped up to the edge of the bed. The ceramite bed-rail gave a better surface for bouncing. I bounced, on my tiptoes and flew up, blanket stretched between my hands.

There is this state I go into when in fear or anger. It seems as though I can move faster—and be stronger—than normal people. At least enough to take everyone by surprise. It had seen me through countless battles in boarding schools, hospitals, detention centers. I never understood why people didn't match it. They didn't seem able to.

As time seemed to slow for me, I wrapped the blanket over the head of the intruder and pulled, with the blanket still held in both hands. A blanket is the worst garotte possible. I much prefer a scarf or a rope. But even I couldn't have everything. Where would I put it? Who would polish it?

As my prey started to flail, I knew that however much slower than I he was, he was stronger. And bigger. I pulled the ends of the blanket I had grabbed, as tight as I could around his neck. It wasn't pliable enough. I needed something big and heavy to crash over his head. But—damn the space cabin!—everything was locked behind drawers and doors. And he was thrashing, struggling, groping for my arm.

I did what comes naturally in these circumstances. I lifted my foot, aiming with my heel because bare toes aren't very effective, and kicked. Hard. Right at the center of his manhood. He screamed and let go of my arm.

Just long enough for me to find, on the floor, the boots that, according to my bad habit, I had taken off and left by the side of the bed. I mustn't have been asleep very long, since my maid hadn't picked them up yet. This meant that most of the people on board should be awake still.

As I thought this, I grabbed the boot. It was more fashionable than practical, a boot designed for walking indoors and looking good. Fortunately at that time looking good—in the short silk dresses I normally favored—demanded a fairly high heel, plated all around with a thick layer of silver. And chunky, according to current fashion.

I had just time to weigh it in my hand. My uninvited guest was trying to pull the blanket off and calling out some nasty words that good scientists shouldn't pronounce.

When hitting someone on the head it's all a matter of knowing the point where it will do the most good. Or harm. Long experimentation had told me the point above the ear would work, only of course, he was moving around too much to make it exact. I did try.

I visualized my hand going through his head—because otherwise the blow would lack the needed force—pulled back, to gain momentum, and brought the heel of the boot hard on his head. As hard as I could from the disadvantage of a lower height. If he hadn't been half-bent, trying to unwrap the blanket, I'd never have managed it at all.

As it was, the first hit made him pause. Just pause. He didn't fall and I thought I hadn't hit hard enough, so I hit again, harder.

He made a sound like choking and went down. The blanket, which he'd managed to loosen most of the way by the time he fell, came off his face.

"Lights on," I said, and jumped back, holding my boot, because if he came back at me I was going to hit him again, and this time I wanted to be able to see where.

But as the soft glow shone on his pale face, I recognized Andrija Baldo, the head o my father's goons. And he was very still.

His square face was pasty gray. The brutal lips another shade of grey. There was a drop of blood running from beneath his hair. I wondered for a moment if I had killed him, and exactly how mad Father would be if I had.

Then I realized his chest was rising and falling minimally. So, still alive.

And in his right hand, firmly clutched, was the oval shape of an injector. I knew the color too. There was only one medicine they packaged in those piss-yellow injectors.

Morpheus. The strongest knock-out juice in the universe.