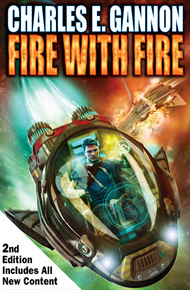 Dr. Charles E. Gannon's Caine Riordan hard sf novels (Baen Books) have all been national best-sellers and include four finalists for the Nebula, two for the Dragon Award, and a Compton Crook winner. In 2020, the "Caineverse" expanded into an exclusive imprint, Beyond Terra Press, under the aegis of Chris Kennedy Publishing. It has already brought the essential side series Murphy's Lawless to readers, has a second "season" in process, and is also reissuing the anthology Lost Signals of the Terran Republic.

Gannon's epic fantasy series, The Vortex of Worlds, debuts in 2021. He collaborates w/Eric Flint in the NYT/WSJ bestselling Ring of Fire series, has written two solo novels in John Ringo's Black Tide Rising world, and co-authored three volumes in the Starfire series. He's also worked in the Honorverse, Man-Kzin, and War World universes. His other writing credits include lots of short fiction, table-top roleplaying games (Traveller, 2300 AD, Twilight: 2000, Dark Conspiracy) and years of work as a scriptwriter/producer in NYC.

As a Distinguished Professor of English, Gannon received five Fulbrights. His book Rumors of War & Infernal Machines won the 2006 ALA Choice Award for Outstanding Book. He is a frequent subject matter expert for national media venues (NPR, Discovery, etc.) and for various intelligence and defense agencies. He resides in Annapolis, Maryland, with his wife and four living children.

2105, September: Intelligence Analyst Caine Riordan uncovers a conspiracy on Earth's Moon—a history-changing clandestine project—and ends up involuntarily cryocelled for his troubles. Twelve years later, Riordan awakens to a changed world. Humanity has achieved faster-than-light travel and is pioneering nearby star systems. And now, Riordan is compelled to become an inadvertent agent of conspiracy himself. Riordan's mission: travel to a newly settled world and investigate whether a primitive local species was once sentient—enough so to have built a lost civilization.

However, arriving on site in the Delta Pavonis system, Caine discovers that the job he's been given is anything but secret or safe. With assassins and saboteurs dogging his every step, it's clear that someone doesn't want his mission to succeed. In the end, it takes the broad-based insights of an intelligence analyst and a matching instinct for intrigue to ferret out the truth: that humanity is neither alone in the cosmos nor safe. Earth is revealed to be the lynchpin planet in an impending struggle for interstellar dominance, a struggle into which it is being irresistibly dragged. Discovering new dangers at every turn, Riordan must now convince the powers-that-be that the only way for humanity to survive as a free species is to face the perils directly—and to fight fire with fire.

I wanted to include Charles E. Gannon's FIRE WITH FIRE because the book itself has garnered so much attention—both awards and bestseller lists—and because Chuck himself has worked beside me at our WordFire booths, energetically hand-selling his books. This is great, solid hard-SF and a page turner. – Kevin J. Anderson

Corcoran, a tall, broad-shouldered man whose sharp blue eyes and trim physique belied his advancing age, raised a silencing hand. He ignored the captain's waiting covert ops team, and moved instead to the cryogenic suspension unit resting on a gurney just behind them. "Is that the intruder?"

"Yes, Admiral. We found him right outside the door to your quarters. I'm sure you have the report by now."

"We do, Captain Chen," answered a second man who came around the same corner that Corcoran had. "But the details are sketchy."

Chen did not recognize the man, who spoke with an English accent. "Apologies, sir: I relayed what I had at the time."

The tall, thin Englishman looked up from his dataslate. "So you weren't present at the incident?"

Chen stood even straighter. "Nonetheless, I am the team leader, sirs."

Corcoran canted his head toward the Englishman. "Mr. Downing is not implying you were at fault, Captain Chen. We know it's your job to take responsibility for what happens on your watch. Even if you weren't there yourself. Now, what more have you learned since alerting us?"

"The subject—Mr. Riordan—was detected near your quarters at 2020 hours GMT, Admiral. He was behaving in a suspicious manner, apparently attempting to force entry. Since you had shared classified information with him earlier today, we feared that he intended to steal additional, sensitive data from your suite."

Downing stared at the cryogenic suspension unit. "And he resisted so strongly that you had to render him unconscious and stick him in a cold cell?"

Chen felt sweat rising on his upper lip. "That was, in hindsight, an excessive response. However, when accosted, Riordan turned sharply and his hand was concealed in a bag. Our operative had originally conjectured it might hold tools, but then feared that it might conceal a weapon. So the subject was—subdued."

Corcoran nodded, but, Chen noted, without the peripheral signs of reassurance that were common among Western commanders. "That explains why he's unconscious. Why did you put him in a cold cell?"

Chen's upper lip was now thoroughly wet with perspiration. "Sirs, you were on the Far Side. I had no way of knowing if you had received our communications. And we had to act quickly."

Downing folded his arms. "Why?"

"I reasoned that Mr. Riordan's books might have made him too well-known for us to detain until you returned. And if the local authorities had discovered him in our custody, that would have necessitated explaining why my team is here at all, thereby attracting more attenti—"

"Yes, you had a difficult situation," Corcoran said. And Chen saw that he meant it, but was also disappointed. Now that Caine Riordan was in cold sleep, there was no way to awaken him without calling attention to the covert activities being undertaken on Luna. Which meant that—

"Have you informed our contacts that we will need to initiate a 'missing, presumed dead' scenario to cover up Mr. Riordan's disappearance?"

"Very good. Mr. Downing will need access to the corridor security footage. We'll overwrite the recording of the incident with 'neutral view' footage. See to that quickly, Rich."

The Englishman grumbled. "Let's just hope somebody hasn't reviewed the video logs already." He moved off to establish communication with their operative inside Perry City's security force. Corcoran turned back to Chen. "And what were the contents of the bag Mr. Riordan was carrying?"

The Taiwanese captain handed it to the admiral, who looked inside as Downing called over, "We're clear; no one's screened the security footage, yet."

The retired admiral stared down into the bag for several seconds before handing it back to Chen. "Keep the contents with Mr. Riordan for now. I'll have need of them later."

Chen did not allow himself to look puzzled. "Yes, sir."

Downing had returned. He looked at Caine Riordan's deathly white face, made blue by the glass of the cryocell's lid. "You know, I believed Riordan when he said he wouldn't reveal our work here." He shook his head, ran a hand rearwards over his prominent widow's peak. "Somehow, I still believe him."

Downing shrugged. "No tools for breaking and entering, then?" He scanned the area. "So what was in the bag?"

"Nothing," answered Corcoran. "Nothing of importance, at any rate."

Chen almost started in surprise, managed not to glance down at the bag he was holding.

Downing shook his head again. "I'll make arrangements to have Riordan's cold cell shipped to our holding facility in—"

"No, Rich. The Taiwanese will have to transfer Caine from their cryogenic system to ours, first. We can't take receipt of a foreign cryocell: too likely that someone will ask an awkward question."

Downing nodded. "Right," he said. "I'll set up the exchange paperwork now." He moved off to send the necessary orders.

When Downing was well out of earshot, Corcoran looked down at the cold cell again and spoke to Chen in a very low tone. "Because your cryogenic technology is so different from ours, I imagine Mr. Riordan will experience a difficult reanimation."

"Oh no, Admiral," Chen corrected in a voice that was both deferential and enthusiastic. "This cryocell utilizes Taiwan's improved pre-toxification system. It is vastly superior to our current models. Memory loss has been reduced to the same level as your 'slow freeze' technology. Indeed, recent studies—"

Corcoran looked up from the cold cell, his eyes unblinking. "I said, Mr. Chen, that this will be a difficult reanimation. In fact, it will be very difficult, and I'm sure the memory loss will be even worse than with your older models." Corcoran still did not blink. "Do I make myself clear?"

Chen had come to the conclusion that Western commanders were not particularly good at fixing underlings with stern, even terrifying, stares. Now, looking into Nolan Corcoran's blue eyes, he suddenly found himself revising his opinion. "Y-yes, Admiral. Mr. Riordan's reanimation will be most difficult. Singularly difficult."

But Corcoran was staring down at the cryocell again. The look on his face puzzled Chen: was it guilt, regret, resolve—or all three?

Chen turned to his security detachment. "Flag Mr. Riordan for 'augmented' reanimation prior to transfer back to the US authorities."

"What kind of augmentation?" asked Chen's adjutant, taking Riordan's bag when his superior held it out toward him.

Chen fixed his underling with a baleful stare of his own. "Do you really have to ask?"