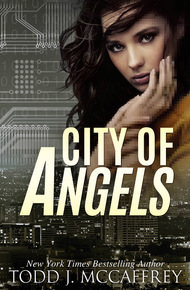 New York Times bestselling author Todd J. McCaffrey is the son of Nebula Grandmaster Anne McCaffrey. On Pern, he has written three solo novels and another five in collaboration with the late Anne McCaffrey.

In addition to City of Angels, his recent works include his short story "Golden," to be published in Women in Practical Armor; and the two short stories, "Rhubarb and Beets," and "Red Roses," which bookend the charity anthology, One Horn to Rule Them All: A Purple Unicorn Anthology.

Her name is Ellay. She takes it from the city she loves, the city of her birth. She's smart, she's fast, she's the first of her kind. And she knows that very soon, something horrible is going to happen. Ellay is an AI—Artificial Intelligence. Machines that think like humans, only faster. Some fear they will destroy us. But what if, like all living things, an artificial intelligence starts out just like a baby—cold, wet, lonely, scared, crying for attention? Can she convince the government to believe her or will they hunt her down before she gets the chance to help?

From the New York Times Bestselling author of Dragonsblood and Dragon's Fire, comes an exciting new science thriller with the emotional impact of E.T., and the page-turning power of John Grisham. Ellay will make you believe in the power for good of science and technology … and angels all over again. City of Angels.

Todd J. McCaffrey is best known for the Dragonriders of Pern collaborations with his mother Anne McCaffrey, but he is also a solo author in his own right. WordFire just released the expanded version of his edgy cyber-SF novel CITY OF ANGELS. In the the past two comic shows where we featured Todd as a guest author, he sold out of all his copies. I expect him to do very well here at StoryBundle. – Kevin J. Anderson

Cybersecurity Operations—or, Ops: low light, cold air, and a tension level that crackled on the skin.

Georgia MacDonald lengthened her stride as she headed to her workstation. Harry Norman didn't look up from his desk as she approached. He was bent over his keyboard, shoulders hunched, typing as quickly as he could, sweat visible on his face.

One of those days, Georgia thought to herself, grabbing her chair and keyboard in one swift, graceful move. She pulled a copy of Harry's displays, pursed her lips for a moment, started to work.

Harry was fighting with someone trying to hack into the Department of Defense—they were after the nuclear launch codes. That wasn't out of the ordinary—it happened at least twice a week—but this guy was beating Harry.

"He got around the first level like it was butter," Harry said. "He was into the second level before—" He stopped speaking as his fingers flew over his keyboard—more software programs into the defense.

Georgia said nothing, her fingers flying—one of her programs. A tense moment, then she slumped in her chair, relieved. "He's in the honeypot."

A honeypot was a network of computers specially designed to lure hackers.

"He's got the 'GO' codes," Harry said, leaning back in his chair and turning his head to flash Georgia a smile.

"He just bought the worst of all worlds," Georgia set another routine running and raised her eyebrows when the results popped up. "He's using three machines."

"Those are mighty powerful machines," Georgia observed. Certain foreign powers—not just governments, either—would pay a great deal for the keys to the United States' nuclear arsenal—enough to finance the hundreds of solo operations that every day tried to do just that. "He could be working for our friends."

Georgia searched her folders for a particular program and, with an evil grin, sent it after the three computers.

"Just try hacking into the US, twerp!" she said.

A minute later, all three computers flashed off the net. Dead.

"Wow, Georgia, you sure showed that nasty eleven-year-old!" The voice that came from behind her belonged to Johnny Jones—a short, dark-haired New Yorker with all the brash and none of the sophistication.

"Another idiot tried to hack into DoD and get our missile launch codes. We sent him to a honeypot—and Georgia reformatted his hard drives," Harry said, reaching up an outstretched hand to Georgia for a high-five.

"Oh, wow, Georgia's decided to play with the real boys!" Jones said. "Didja give up on Rome?"

"Jonesy, what this kid spent half a day doing, an AI could do in a millisecond."

"Something like what your friend Ryan wanted to make?" Johnny Jones asked. "A real live talks-to-you-and-holds-your-hand sort artificial intelligence that's smarter than anything?"

Jones smirked at her. "If it's hand-holding you want, Georgia, I'm there for you any time!"

Georgia ignored him, starting up her morning routines.

"Ah, Georgie, and I had such hopes!" Jones cried.

"Don't you have work to do?" Harry Norman asked.

"LA can look after itself, it's not going anywhere. The only thing worth watching is that Fleet Streets launch—that'll be a laugh," Jones said negligently, but Georgia heard his footsteps heading back toward his own work area where Alan Manning was waiting for his relief.

"He's an asshole," Harry said as he rose and moved over to Georgia's area.

"But he's our asshole," Georgia agreed bitterly. She changed the topic. "Anything from Rome?"

"Rome's your baby," Harry said. He caught her look and added, "But, no, nothing that I noticed. I think they shut it down when Lawson left."

Lawson was good. Georgia was certain he'd been the one to convince the Vatican in to this wild idea, but she was pretty sure that since then he'd lost control.

The trouble with Rome was, since the departure of Father Lawson a few weeks ago, there had been very little to learn. The network activity log looked no different than it had for the past month—the part Georgia had tentatively identified as their active phase.

"Georgia," a gruff voice spoke beside her.

"How are our friends in Rome?"

"Still active," Georgia said. She shrugged. "Their research is funded to the end of the year."

"So there's no reason to stop," Sam Bennett agreed. He pointed to the screen—where the results of Georgia's counterattack were still visible.

"Did you get his prints?"

"The honeypot's still analyzing: we stand a good chance," Georgia said. Prints in this case were a sophisticated analysis of the hacker's coding, approach, and methods. The idea had been Georgia's; in fact, it had been one of the two ideas which had brought her to the attention of Sam Bennett and the CSC in the first place.

The other idea had been the one that got her to join the Department of Defense's Cyber Security Center—and had ended her relationship with Jim Ryan. Ryan had believed that any artificial intelligence naturally had to be good. Georgia wasn't sure. She thought that, just like any animal, if an AI was treated badly or hurt, it would defend itself. It might even kill.

Sam Bennett, interviewing her for an "unknown" agency, had asked Georgia, "So, Ms. MacDonald, if you found an AI that was treated badly, that felt it had to defend itself, what would you do?"

"If we couldn't reason with it," Georgia had begun, "if it decided to be 'evil'—" she paused, seeing the tension growing in Jim Ryan's eyes, worrying about how he'd react to her next words.

Sam Bennett motioned for her to continue.

She took a deep breath and said, "—then we kill it."

Jim gave an angry cry but she continued, adding, "Before it kills us."

Which was how Georgia MacDonald ended up watching Rome. Because Father John Lawson, formerly Donal Lawson of CalTech, had convinced the Vatican to attempt to create the first artificial intelligence.

"We need to get someone in there," Georgia said, pulling herself back from the memory. "Or we need to talk with Father Lawson."

"NSA, CIA, whatever," Georgia said, flicking her hand dismissively as she listed the "real" agencies that could represent them. "If they do make an AI and it gets out …"

"Assuming you're right, how do you get to it?"

"Heck, I still don't even know how to figure out if they can make one," Georgia said, shaking her head. "And that's probably the best news—if I can't break into their system, there's a good chance any AI will find it hard to break out."

"Mmm," Bennett murmured in agreement. His phone beeped. Bennett pulled it out of his pocket and glanced at it. "Well, we know where Father Lawson is."

"Well, Jim's out there," Georgia said. "He signed on with DynaCorps for the Fleet Streets project—"

"That was a change for him, wasn't it?" Bennett asked. He gave Georgia a thoughtful look. "You don't think—?"

"He's all stuck into nanotechnology and nanobots," Georgia said, shaking her head. "From what Jonesy's been saying, he might be trying to tie them into Fleet Streets, but that'd mean nothing more than a big expert system, not a true AI."

"Yeah, the dork they got to build their real-time database bailed," Jones called from over by his desk. "Mackey—the VP of software—handed the patch-up job to Ryan." Jones snorted and shook his head, staring at Georgia. "He's gonna fail and get fired. Again."

Bennett nodded his thanks for the news and turned back to Georgia. "What about Ryan?"

"Maybe if I talked with him, told him about Father Lawson—"

"From what I understand, your Mr. Ryan has his hands full at this particular moment."

"He's so ADD all I have to do is point and say, 'Look! Bright, shiny!'" Georgia said. "Anyway, he and Lawson have a history. If he talked with Lawson, he'd get a good feel for what they managed to accomplish in Rome."

Bennett's eyes narrowed. "If that's so, why didn't Rome get Dr. Ryan?"

Georgia shrugged. "I'm still surprised that DynaCorps picked him up."

"No doubt they know what they're doing," Bennett said. Georgia turned her chair around to stare up at him directly. Bennett gestured to his phone. "I've got to go."

"Well, not now—you're working," Bennett told her. "Of course," he added, his eyes twinkling, "I cannot dictate how you spend your off hours, Miss MacDonald."