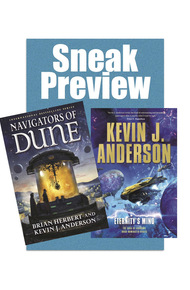 Kevin J. Anderson is the author of more than one hundred books, 47 of which have appeared on national or international bestseller lists. He has over 21 million books in print in thirty languages. He has won or been nominated for numerous prestigious awards, including the Nebula Award, Bram Stoker Award, the SFX Reader's Choice Award, the American Physics Society's Forum Award, and New York Times Notable Book. By any measure, he is one of the most popular writers currently working in the science fiction genre.

Brian Herbert and I have written fourteen massive DUNE books together as well as our epic SF "Hellhole" trilogy. In between those collaborative projects, I spent a lot of time working on my "Saga of Seven Suns" space opera series, and Brian wrote his own ambitious space opera trilogy, The Timeweb Chronicles. As a very special bonus for the Adventure SF storybundle, we're including a sneak-preview excerpt of our forthcoming NAVIGATORS OF DUNE (the end of the Great Schools of Dune trilogy) as well as ETERNITY'S MIND, the final book in the Saga of Shadows trilogy. Since everyone gets those sneak previews, I decided to include Brian's TIMEWEB in the bundle, as well as our collection, TALES OF DUNE, which gathers the previously uncollected original Dune short fiction we've written over the years. – Kevin J. Anderson