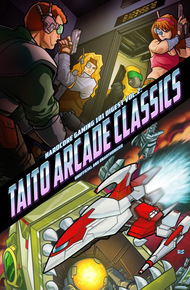 Warning! A new HG101 book is approaching fast! The second HG101 digest focuses on over thirty titles from Taito's diverse library, featuring Darius and Elevator Action, but also covering the likes of Rastan, The Legend of Kage, The Ninja Warriors, The NewZealand Story, Metal Black and more!

"A super-entertaining factual romp through Taito's best and weirdest, from Elevator Action to Liquid Kids & beyond, in HG101's traditionally smart style, plus some intriguing bonus features." – Simon Carless

Amidst the clutter of sci-fi arcade shooters in the mid-1980s, companies needed to make their games stand out in some way. So, Taito had an idea for a new game – yes, there was still a spaceship, and yes, it still took place in outer space. However, instead of the usual aliens, you fight fish.

Yes, fish. Not regular, aquatic fish, but robotic fish with lasers equipped to their fins, giant metal teeth, and missiles firing from their gills. Not just fish, either. There are squid, snails, lobsters, octopi, sharks, and all manner of sea creatures, too.

The plot is about the people of the planet Darius, who are being terrorized by the Belsar (sometimes spelled "Belser") empire and their fleet of oceanic robots. Only the heroic pilots Proco and Tiat (which, when pieced together, is "Taito Corp" backwards) can save the day. The constant star of the Dariusseries is the Silver Hawk ship. Much like Gradius, it has a primary, forward firing weapon, along with bombs that can be used to attack vertically, and a shield.

The arcade Darius games also use a unique system that attach three monitors together, then reflect those images off mirrors, to create one seamless, massive, horizontal playing field (also used in The Ninja Warriors). Naturally, this couldn't quite be replicated on consoles, so that gimmick is lost, but emulators can replicate the dimensions of the screen.

The other most distinctive element of the Darius games is its branching paths. After defeating a boss, you can choose your next level. There are 28 stages in total, though you only play through 7 in a single run. It adds tremendously to the replay value, especially since there are multiple endings, depending on which final zone you end up at. While most of the endings are pretty boring (variations of the ships escaping /landing/etc.), one particularly goofy one shows you, the player, sitting at an arcade cabinet and cheering victory after having beat the game. Alas, Darius adheres to the "quantity over quality" mantra. The levels are a bit dull, with little variation in the scenery, and just waves upon waves of enemies.

Your main gun is rather weak, and even popcorn enemies take several hits to destroy. There are colored orbs that let you upgrade your main gun (red), bombs (green), or shield (blue), dropped by enemies of the corresponding color, but each one only increases its power by a tiny bit. When you collect seven red orbs, you'll upgrade to the next level, from missiles to lasers to wave beams. Get killed and you'll lose all of your orbs on that level, and seeing that these orbs are in short supply, you might spend a vast majority of the game in an extremely weak state, unless you're really good. Getting killed also sends you back to a checkpoint.

The music, however, is excellent. Composed by Hisayoshi "OGR" Ogura, it's one of Taito's first great soundtracks to come from Zuntata, the company's in-house band. The most memorable theme is the first level song, "Captain Neo", which was borrowed from a previous Taito shooter, Metal Soldier Isaac II.

Many Darius games saw revisions. For this one there's an "Extra Version", which tweaks the enemy layouts and weapon strengths, making it a bit easier.

Compared to later Darius games, the original is a bit dull, but its impressive when held up next to many other shooters from 1986. The bosses still look great (and many were designed by famed anime studio Tatsunoko). All of the Dariusgames have the same amusing boss introduction: a blaring siren with the message "WARNING! A huge battleship *boss name* is approaching fast".